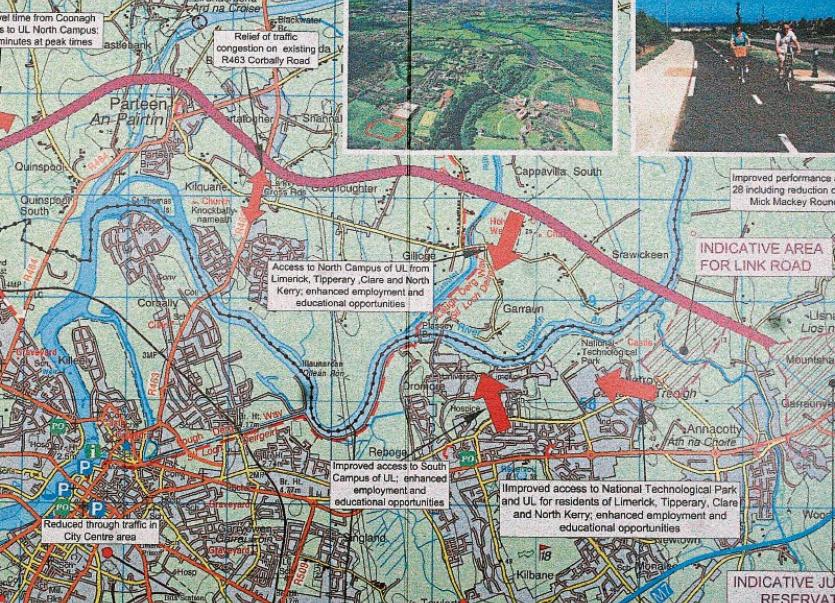 Councillors are being asked to include the likely route corridor, in pink, of the Northern Distributor Road in the County Development Plan

A TOP Limerick council official admitted “we don’t know what we are going to do” on the Northern Distributor Road if councillors reject a proposal in May.

Kieran Lehane, physical development directorate, speaking at a Cappamore-Kilmallock municipal district meeting, said: “There is no other proposal we have on it.”

Councillors are being asked to amend the County Development Plan by including the likely route corridor of the Northern Distributor Road. In essence, Mr Lehane said the proposal is to protect the land in question.

“Any proposals of development will come to us and how does it affect the road,” said Mr Lehane.

He and Vincent Murray, senior engineer, gave a presentation to councillors and looked for their support when the vote takes place on May 29.

They outlined that the proposed road will cross the northern part of the city and link the road network adjacent to the Mackey roundabout area of Lisnagry to Coonagh on the Ennis Road. There will be a number of junctions along it to serve Corbally, UL and the National Technological Park.

The map shows the 100 metre wide corridor that the council proposes to limit development within until such time as the final road layout is designed and approved. A wider protected area is in the vicinity of the Mackey roundabout and this is to facilitate improved junction connections linking the proposed Northern Distributor Road to the existing road network including the Old Dublin Road, roundabout and Cappamore Road.

Mr Murray said the Department of Transport won’t release monies to do a more detailed design to pinpoint where the road will go until they get a vote of vote of confidence from councillors.

He said that a strategic flood risk assessment has been carried out and stressed that the project “will not worsen flooding”.

Mr Lehane said the Northern Distributor Road is “essential to Limerick” and is “for the good of Limerick”.

Journey times around the north of Limerick city will be significantly reduced and decrease peak time traffic congestion on Corbally Road and “allow this traffic to disperse around the new distributor road to get to their destinations within a shorter time”.

It is “not sustainable” that at peak times it takes 40 minutes to exit UL and 20 minutes to leave the National Technological Park.

“The road is going to be several years down the road but we need to plan to solve the problems,” said Mr Lehane.

”The road system is not designed for it. People can’t afford to send their children away to college so these are own children that are commuting,” said Mr Lehane.

Cllr Noel Gleeson said families wanting to build a house on a site along the route “had no hope”.

”It is fine if they have to wait 12 months to find out but if it is five or six years,” said Cllr Gleeson.

Mr Murray said: “There is an urgency there.”

Cllr Gleeson said: “We think of birds and bees but we need to think of people.”

“We are thinking of people. We are meeting them,” said Mr Murray.

Cllr Gerald Mitchell asked if many houses would need to be demolished?

Mr Lehane said there is no absoulte certainly that any would need to be demolished but some in proximity “might decide to”.

Cllr Bill O’Donnell said the “uncertainty” over the time lag is the problem in being asked to include the likely route corridor of the Northern Distributor Road in the County Development Plan.

Cllr Eddie Ryan, chair of the municipal district, described it as an “important piece of infrastructure”.