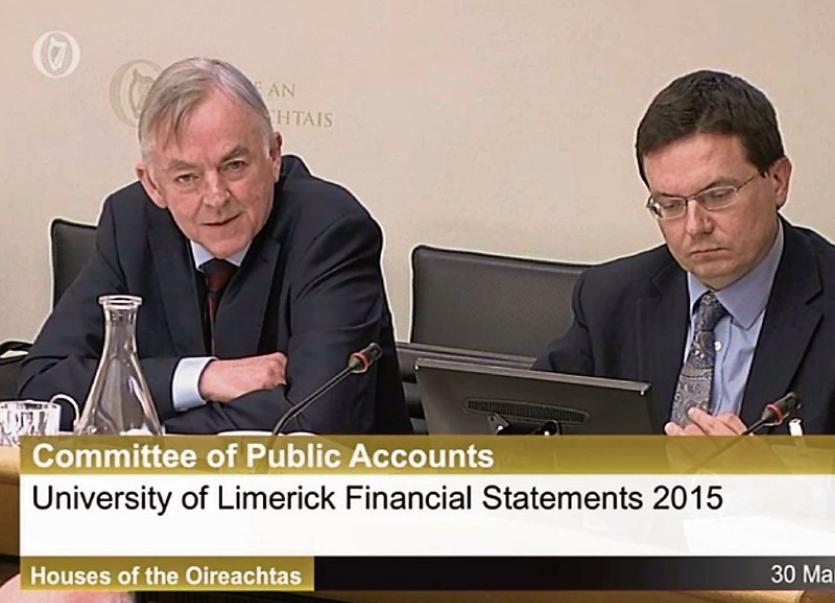 UL president Don Barry and John Field before the PAC

THE PRESIDENT of the University of Limerick has told the Public Accounts Committee that he accepts personal responsibility for any failures in the financial control systems at the university, which has led three whistleblowers from the finance department to make allegations regarding inappropriate expenses.

One of those employees has since left the university, while two others remain suspended for nearly two years with pay, with costs to the State amounting to over €200,000 to date, including suspension payments and the costs of two independent reports commissioned by the Higher Education Authority.

However, at the hearing this Thursday afternoon in Leinster House, president of UL, Professor Don Barry, said he rejected “any statement that there was any corruption going on in the university in the strongest possible terms.”

He did not accept that there was any wrongdoing or abuse of the expenses system, but accepted that there were financial control failures. 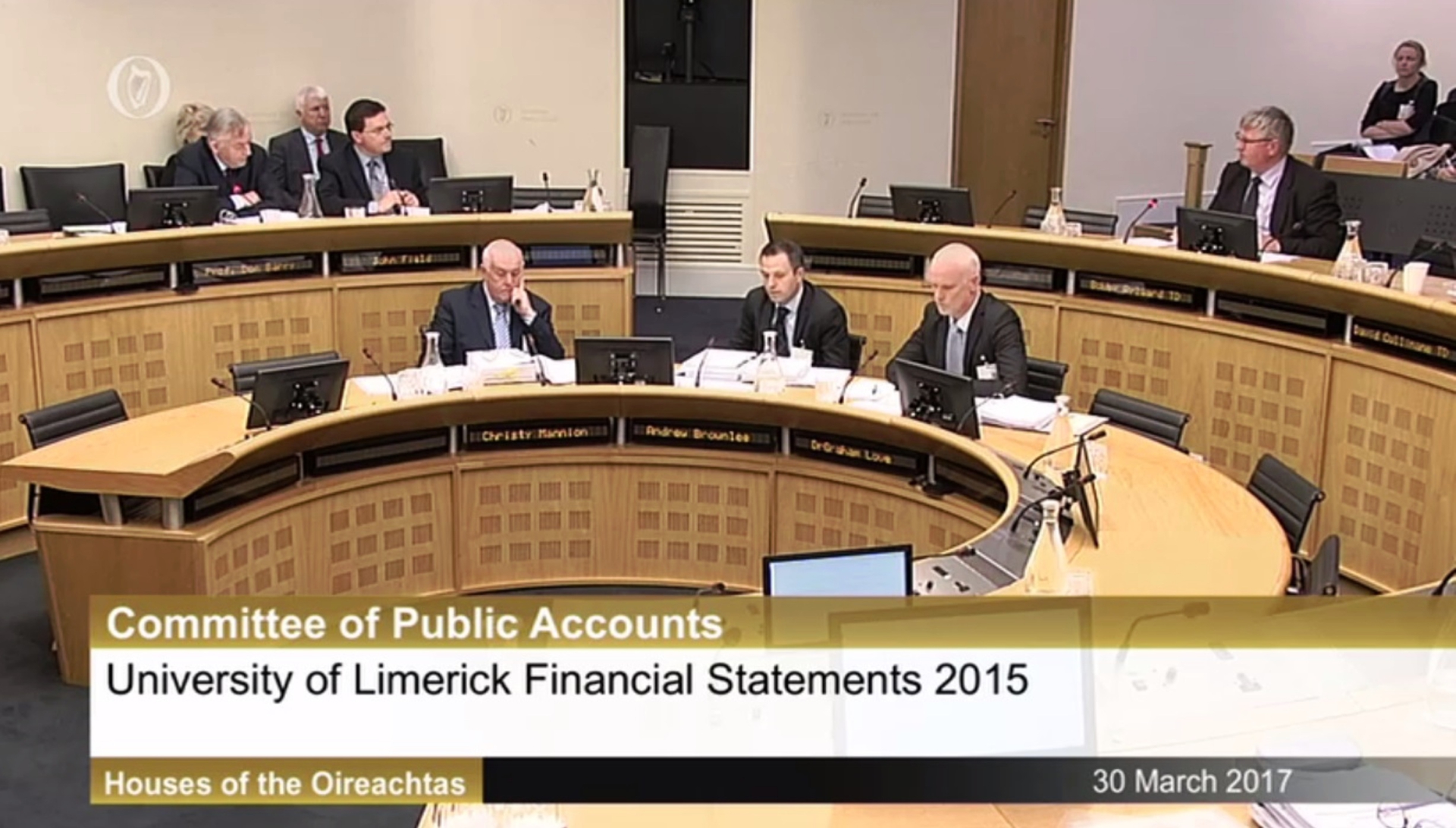 In relation to the payment of expenses to UL staff while on sabbatical, specifically one staff member and a spouse in Sydney at a cost of €15,000, he told the committee that UL staff were not “going off sunning themselves in the Bahamas”, but to strengthen links with other universities overseas.

However, he conceded that their sabbatical policy at the time was “wrong” and that it has since been revised.

Deputy leader of Sinn Fein, Mary Lou McDonald, a graduate of UL, said at the hearing that there were an “astonishing amount of complaints” in relation to expenses in what could be described as a “VIP system”.

“At worst, it represented corruption within the system,” she said. 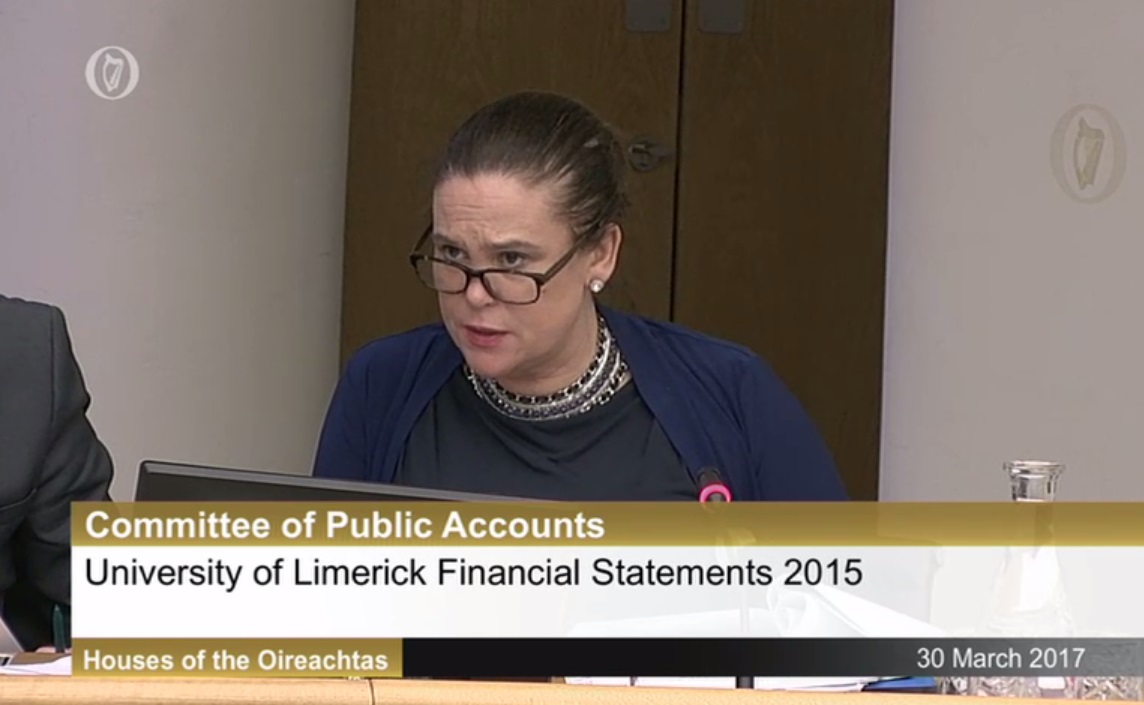 She said Person A – Leona O'Callaghan, the original whistleblower in the case – found it almost impossible to get management to sign off on what she described as “fraudulent expense claims.”

She said that Ms O'Callaghan exercised “due diligence” in her role in the finances department but “hit a brick wall” in finding a “system that showed favouritism” to some senior staff members.

In relation to the seven sample expense claims which Ms O'Callaghan brought to the PAC in 2012 – which did not go to a public hearing at that time – Ms McDonald said the employee was “left to hang out to dry in respect of these claims.”

President Barry said Ms O'Callaghan, who was not named in the hearing but earlier identified herself as Person A, “was not ignored or blanked..and was a key member of the department.”

He added that she did correctly identify improvements to be made in the processing of expenses claims.

He said that Ms O'Callaghan went on sick leave for a time and accepted an early retirement package from UL.

“But she was leaned on for having the temerity in coming forward,” said Ms McDonald. “She got sick as a consequence of all of that...she was punished and kicked to the curb.”

President Barry said that his understanding of the case and Ms McDonald's “would be miles apart.”

She put it to him that if expense claims for spa treatments were actually processed by Ms O'Callaghan, who was presented with them, “they would set Limerick alight among the chattering classes.”

“I see a cultural problem of people being leaned on, not supported, possibly people getting sick as a result of the stress of that,” she said.

She said the fact that three of 38 people in the finance department made complaints against the university was “quite a high percentage”.

“I'm left with the sinking feeling that all was not well, or is not well, to have three people fall foul of the system. For you to say it's not the fault of the university is quite extraordinary. There's more to this than meets the eye,” said Ms McDonald.

She told the PAC that the highest standard of governance must be applied to public monies, and put it to president Barry “that has not been the case on your watch”.

Prof Barry said he did not accept that statement and that as a result of the Mazars review into the processes and procedures employed by UL in dealing with the case of three whistleblowers, 12 of 15 recommendations have been implemented.

The three remaining recommendations to be implemented include changes to be made to UL's grievance procedure, which is awaiting formal approval with the trade union; the selection of the disciplinary panel to include independent, external members, and the criteria for suspending staff.

Some of these will necessitate changes to be made under the Universities Statute, under the 1997 Act, and UL is addressing these with its legal advisors.

Prof Barry, who is due to step down next month after a ten-year term in office, could not give a specific time-frame in which these remaining recommendations would be implemented.

Ms McDonald said an independent agency should have been employed to conduct a full investigation into the claims of all three female whistleblowers, citing the narrow terms of the Mazars' report, which was commissioned by the HEA.

“It would have been a more credible approach to things,” she added.

The recently appointed new chief executive of the HEA, Dr Graham Love, agreed that a “wider probe was needed.”

John Field, director of finance in UL, said that Persons B and C in the Mazars report identified 69 specific transactions, which differed from Person A.

Person A was replaced by Person B in the finance department.

Both the roles of Persons B and C, who remain suspended with pay for two years this June, have been filled, UL confirmed.

Chairman of the PAC, Fianna Fail deputy Sean Fleming said: “If this was a private company, with people's own money involved, people would have taken a very different approach.”

Deputy Fleming said that in no private company would four people be paid to do the work of two people.

He said there appears to be “no incentive to conclude this on any side to bring a resolution. It can go on indefinitely with the taxpayer paying the bill.”

President Barry said that UL wishes to “bring it to the conclusion as rapidly as possible.”

President Barry also confirmed that Mr Field's predecessor in the role of director of finance – following an interim 12-month vacancy – also received a severance package from UL, but he denied that this was offered on the basis of that person raising questions in relation to capital expenditure.

- More to follow in next week's editions of the Limerick Leader