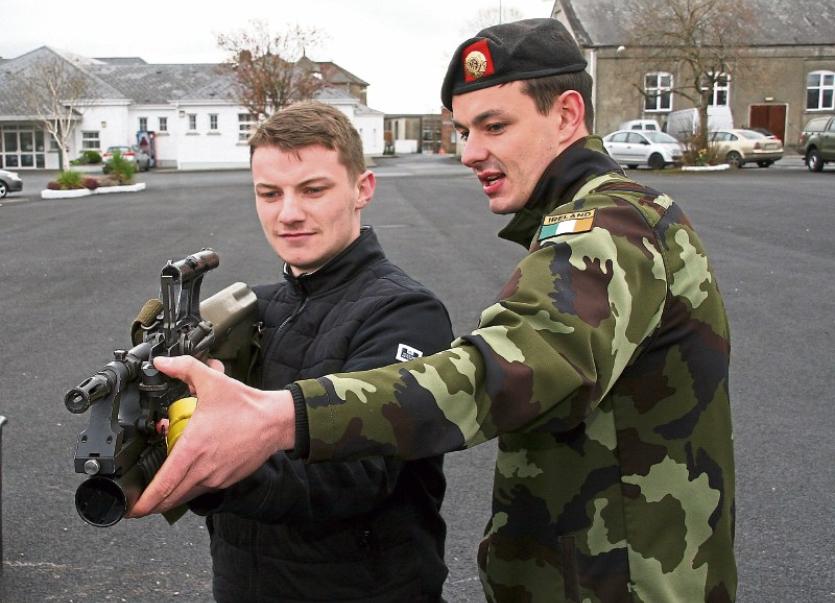 Private Ger Hayes shows Ryan McGrath how to handle one of the weapons Picture: Adrian Butler

YOUNG men and women who are interested in pursuing a career in the Defence Forces got to see first hand some of the weapons and technology used by soldiers during a careers day at Sarsfield Barracks.

The event was organised as part of a recruitment drive which was launched recently by Minister-of-State, Paul Kehoe who has responsibility for Defence.

“This campaign is reaching out to potential recruits on platforms that they are accustomed to, offering them a unique opportunity to become immersed in the type of intense Defence Forces training exercise they can expect to face as they begin their military careers,” he said adding that it is hoped that there are plans to recruit around 850 personnel.

In addition to getting to see and hold some of the weapons which soldiers use while serving overseas, those who attended the event were also able to experience some real-life scenarios using virtual reality technology.

Developed by Niall Campion for the Defence Forces, users get to experience two different scenarios – one on patrol in a MOWAG armoured vehicle,  the other carrying out a rescue mission on board a Air Corps helicopter.

Jordan O’Donnell, 21, from Castletroy who attended the event says a career in the Defence Forces is something he has considered.

“I’ve always had a interest in the military and it is something that I would be looking towards because they are highly respected. Serving your country overseas would be a huge honour,” said Jordan, who has already applied to join the Defence Forces.

Captain Mark White said the event, which was one of a number taking place across country, is very important.

“What we are hoping for in this careers roadshow is for people will be able to come in and have a look at what it’s like being an infantry soldier in Sarsfield Barracks,” he said, adding that anyone who wishes to join any arm of the Defence Forces can apply at www.military.ie.