Mum Lisa, from Caherconlish, said the four were as good as gold 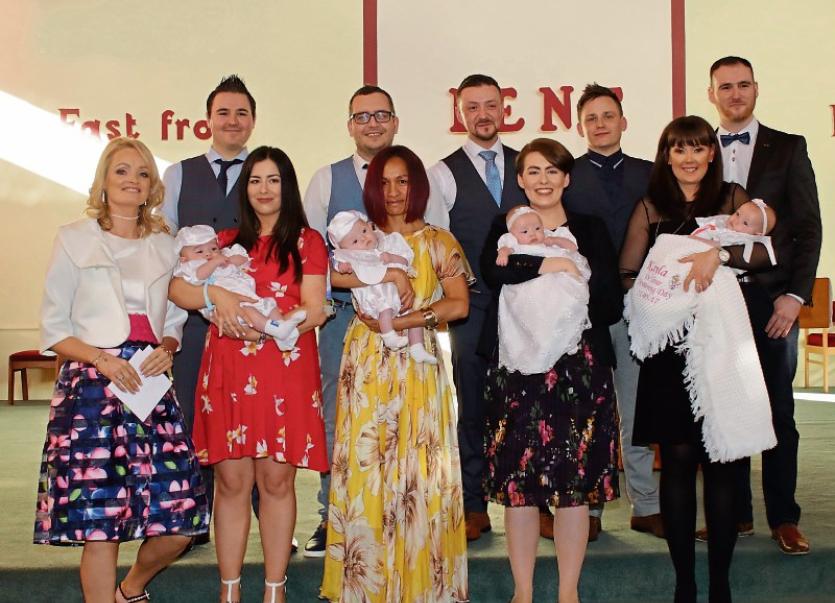 THE PARENTS of a set of Limerick quadruplets haven’t had much chance to wet their babies’ heads but it was the turn of their little ones in Milford church recently.

Lisa, from Caherconlish, said the four were as good as gold.

“They were brilliant, they were so good, they love being around people so they really enjoyed it. They were all smiles. It was another milestone in their lives,” said Lisa. Another important date is this Wednesday as they are six months old.

The godparents are Louise Frawley and Tim O’Keefe; Tiriana Paki and Patrick Greaney; Yvonne O’Dwyer and Mark Bennett; Rebecca Foley and Thomas Fitzgerald. The men are four of Wayne’s best mates, while Louise and Yvonne are first cousins of Lisa, and Tiriana and Rebecca are close friends.

“They were delighted when we asked them although if we had to ask one set of godparents for all four it might have been different,” laughed Lisa.

Alex, Ashley, Max and Kayla are “flying it” she says.

“There is no fear of them, they are all getting big. Grace Slattery from Caherconlish gave me her quad buggy so when the weather is nice I can get out walking with them. It was very generous of Grace and James,” said Lisa, who also thanked Fr Swinburne for making the baptism so special.

“He was so lovely, he was very funny, it was his first time christening quads. It was like a small wedding. We celebrated afterwards in the Absolute Hotel,” said Lisa.

Fr Swinburne said he has baptised triplets and twins but quads was a first.

“As I said on the day, they made history as I think it was the first time there was quads in Milford church. They were exceptionally well behaved, not a bother on them at all,” said the curate.

Another man who had more work than normal at the religious ceremony was photographer Stephen McCoy.

“I was very excited about the shoot as I knew it was going to be a challenge as there were many factors at play, the church, as beautiful as it is, presented some less than ideal lighting situations due to the bright sunshine coming through the stained glass windows. The babies were so good and were really relaxed.

"For sure, I had my work cut out for me as there was four of them to work with but they really enjoyed the whole experience. Lisa and Wayne were a joy to work with again and I wish them and their children the very best in the future,” said Stephen.