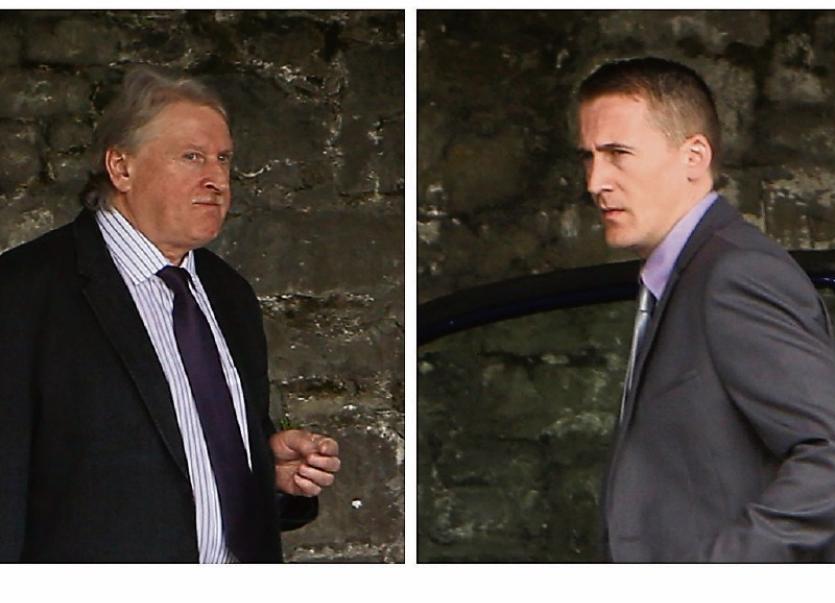 William Slattery and Jonathan Slattery have been ordered to hand themselves over to gardai next Monday - Pictures: Press 22

A FATHER and son who pleaded guilty to multiple VAT offences are to begin eight month prison sentences next week.

Limerick Circuit Court previously heard the offences happened on dates between December 2005, and March 2008 when both men were directors of Slattery’s Ventures Ltd, which has a registered address at Ballycummin Village.

At the time, the company, which subsequently entered liquidation, operated three fast-food restaurants in the city and a shop in Clarina.

Both men admitted “consenting and conniving” with the company to “knowingly or wilfully” deliver incorrect VAT returns to the office of the Collector General at Sarsfield House.

They also admitted claiming the repayment of VAT which they knew neither they nor the company was entitled to.

In addition, they pleaded guilty to an offence under the Taxes Consolidation Act relating to their failure to keep VAT records, as required by law.

The Director of Public Prosecutions successfully appealed the “undue leniency” of the senstence and following a hearing this Monday, the Court of Appeal imposed eight month prison sentences.

Giving judgment, Mr Justice John Edwards said the Slatterys noted the company was selected for a revenue audit on account of not having registered for the plastic bag levy.

Modern electronic cash registers also have a Non Resettable Gross Total (NRGT) function which maintains a running total of all sales which can be accessed at any time. However it is technically possible for a person with the requisite "know how" to disable the NRGT function.

Mr Justice Edwards said the company's record keeping appears to have been chaotic.

When asked for the company's records, the Revenue officer was "simply presented with two cardboard boxes filled with z reads". On going through them, a pattern of skipping every second z read was discovered from the till at the Ballycummin process.

This resulted in a significant amount of cash receipts not being recorded, incorrect sales figures being entered on VAT returns and less VAT being remitted to the Revenue than was due.

The cash register in use at Ballycummin was brand new in 2006, Mr Justice Edwards said. The NRGT function was operating for the first seven weeks but thereafter, appears to have been “deliberately disabled”.

The prosecution case was that the practice of skipping every second z read continued for several two-month vat periods and that the disablement of the NRGT function was a deliberate attempt to ensure there was no running total recorded which could be compared with figures actually returned.

Mr Justice Edwards said the estimated loss to the Revenue was €223,965 which was over and above the sum of €70,000 already recovered by the Revenue Sheriff.

The prosecution case was that the VAT liabilities and irregularities arising out of Ballycummin premises involved “premeditated and deliberate fraud”.

Significant emphasis was placed on the fact that substantial monies, including VAT, received by the company were lodged to the Slatterys' personal bank accounts.

Mr Justice Edwards said the Slatterys provided only very limited cooperation in the course of the Revenue investigation. They made no admissions at interview and did not avail of the opportunity to make voluntary disclosures.

William Slattery was a married father of six who had worked his whole adult life. His son, Jonathan, was a father-of-one at the time of sentencing. Neither had any previous convictions.

They suffered significant hardship since the audit. The company had gone into liquidation, leaving both personally exposed in respect of outstanding debts.

There is a risk of losing the family home. It was submitted on their behalf that the will continue to suffer “significant social stigma”.

Mr Justice Edwards, who sat with Mr Justice George Birmingham and Mr Justice Alan Mahon, said the Court of Appeal agreed with the DPP that the case merited a custodial sentence to be actually served.

Timothy O'Sullivan BL, representing the DPP, conceded that he could not complain with a three year headline sentence - if that was what the Circuit Court judge decided - but would vehemently contend that the suspension of the whole term gave excessive discount for mitigation.

Mr Justice Edwards said the court accepted that there was considerable mitigation in favour of the Slatterys.

He said the Court of Appeal would have sentenced them to three years imprisonment with the final 18 months suspended at first instance.

But in circumstances where the case had taken 20 months to come on for hearing, in which time Jonathan Slattery had secured employment and William Slattery was much further into his retirement, the court suspended all but the final eight months.

The Slatterys were required to undertake to surrender themselves at Henry Street garda station in Limerick on Monday, March 27 next.