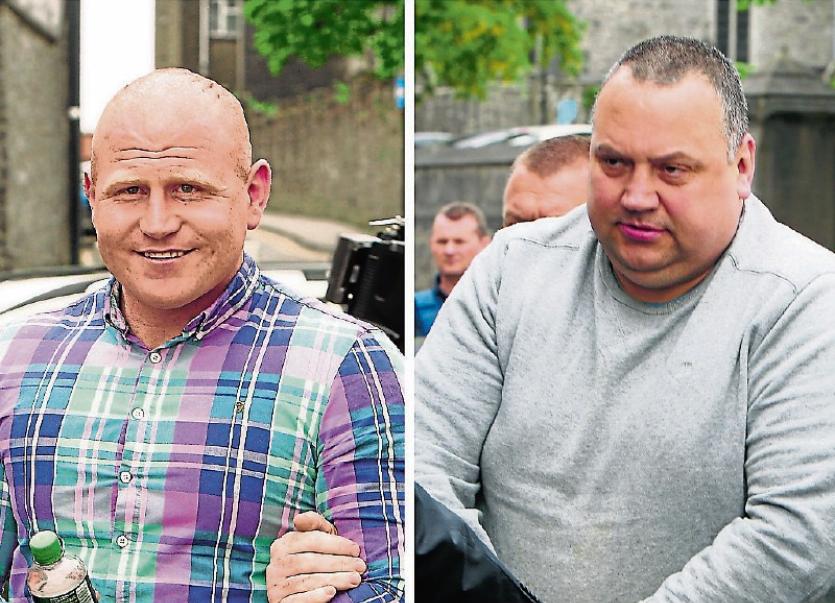 Gerard Mackin and Pat Hayes have each been jailed for three years Picture: Press 22

Two men have been jailed for three years after they admitted their role in a "depraved and barbaric" assault during which another man was nailed to the kitchen floor of a house in Limerick city.

The victim, 53-year-old Dan Quilligan from Rathkeale told the non-jury Special Criminal Court that he "thought he was going to be killed".

Gerard Mackin (34), a native of Northern Ireland with an address at Star Court, John Carew Park, Southill and Patrick Hayes (54), who has an address at Larch Court, Kennedy Park both pleaded, guilty, this Thursday, to assaulting Mr Quilligan, causing him harm at a house at Larch Court, on September 14, 2015.

The men dramatically changed their pleas this Thursday afternoon having initially pleaded not guilty to the charges.

An associated charge of false imprisonment was withdrawn by the State with lawyers entering a nolle prosequi.

Mr Justice Tony Hunt, presiding, described the assault as "most grievous" and he commented that Mr Quilligan was "assaulted in a very depraved and barbaric way by the use of a nail-gun".

During a sentencing hearing, Inspector Padraig Byrnes told Tara Burns SC, prosecuting, that at the time of the offence Hayes was living in the house at Larch Court with his brother and another man.

Mr Quilligan, he said, arrived at the house in a white van driven by a friend having been directed there by Hayes, who knew Mr Quilligan.

The two men came through the back garden into the kitchen. A group of men were waiting and Mr Quilligan and his friend were "immediately set upon".

Mr Quilligan was put in a chair in the middle of the kitchen and assaulted.

His right shoe was removed and a nail gun was used to nail his foot to the floor. The assailants then left the house.

Mr Quilligan freed his left foot from the floor, got into his friend's van and went to the University Hospital Limerick for treatment.

The court heard that CCTV footage showed Mackin's car in the vicinity of Larch Court on the date and time of the assault.

It was the prosecution case that the assault was pre-planned and a joint enterprise.

Hayes, the court heard, was formerly employed in the Defence Forces, from 1980 to 1986. He was discharged after a robbery and assault conviction.

Mackin has no previous convictions.

In a Victim Impact Statement, Mr Quilligan stated his life had been shattered by what happened.

“My life will never be the same. My legs are still in pain. There were holes in legs for weeks. This has caused me to drink heavily and has caused upset to my family. This has ruined my life and my family's life. I genuinely thought I was going to be killed that day and I'll never forget it," he said.

Imposing sentence, Mr Justice Hunt noted the maximum sentence was five years’ imprisonment and he commented the court was “faced with a relatively low limit".

A third man – Mark Heffernan, aged 33, of Swallow Drive, John Carew Park has pleaded not guilty to the assault charge.

He also denies falsely imprisoning Mr Quilligan at the same address on the same date.

His trial is due to continue on Monday.