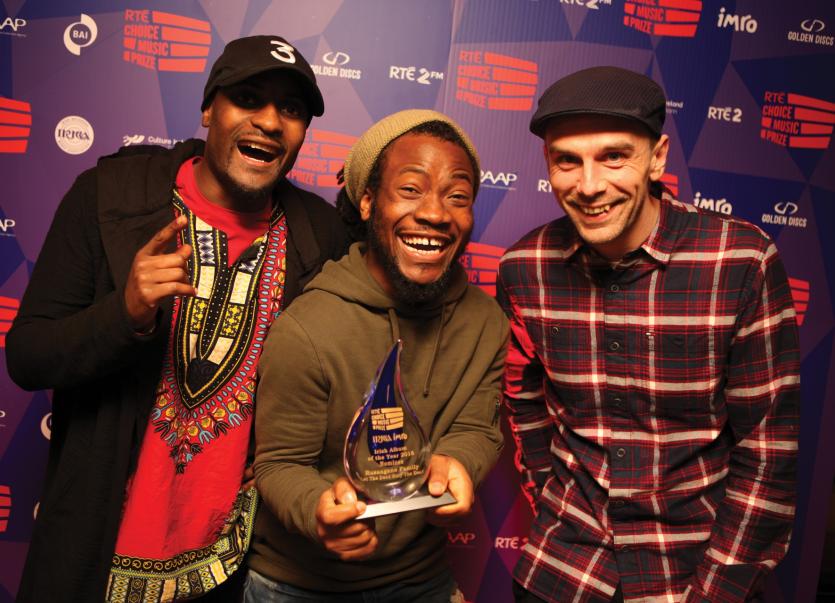 The rap/hip-hop/electro outfit won the award - seen by many as Ireland's answer to the Mercury Prize - at an event in Dublin's Vicar Street this Thursday night.

We have a winner! Massive congrats to @RusanganoFamily, winners of the #RTEChoiceMusic Album of the Year with Let The Dead Bury The Dead! pic.twitter.com/u8jLleTqa4

Rusangano, made up of MynameisjOhn – alter ego of Clare man John Lillis, who plies his trade in Limerick – Zimbabwean born, Shannon raised, Limerick identifying rapper God Knows Jonas and vocalist MuRLI – based in Limerick, but of Togolese descent - beat off competition from the choice of Irish music for the award, which carries a €10,000 prize.

They scooped All Tvvins, Bantum, Wallis Bird, The Divine Comedy, Lisa Hannigan, Katie Kim, Overhead, The Albatross and We Cut Corners - all of whom performed at the event, along with a blistering performance by the Limerick based trio.

In an emotional acceptance speech, the trio spoke about battling adversity making the album, while God Knows shouted out to the "teachers in Limerick and Clare", noting that they had to work in the morning, regardless of attaining Choice glory.

All are associated with Music Generation in Limerick.

Speaking to the Limerick Leader after the award was presented, MuRli said: "I feel legitimate for once as a musician."

God Knows said it "feels amazing that we have made Limerick and Clare proud, but most importantly, I think we made our families proud. My little brother was saying, if we don't win today, he was going to cry. Now he doesn't have to cry! I think he might cry happy tears".

Asked about the reaction to their blistering performance, MuRli said: "We knew it had nothing to do with the performance and what was happening in the room.

"We are very happy with the performance and relieved now, and let's see what happens," he added.

John explained: "It is also quite daunting that, some of the acts - when you are in waiting beside them, you are like 'I have been listening to you for so long, I have so much admiration for what you do'.

"Now we feel like we are musicians. This has legitimised it for us. We know what we are doing - it has been received on a national scale and for us, it is a big moment, definitely," he added.

The electric and powerful album was bursting with samples from the inner reaches of producer MynameisjOhn’s mind and driven by the insightful, socially engaged lyrics of vocalists God Knows Jonas and MuRLI and was perhaps the most vital album of the last twelve months, drawing heavily on themes of immigration and the places and sounds that have influenced each of them in turn.

The 12th annual Choice - backed for the first time by RTE this year - "celebrates and acknowledge the best in Irish recorded music".

It has become one of the highlights of the calendar since its inception in 2005 and is awarded to the Irish Album of the Year, as chosen from a shortlist of ten releases by a panel of twelve Irish music media professionals and industry experts.

The prize fund for the winning act was provided by IMRO and IRMA.