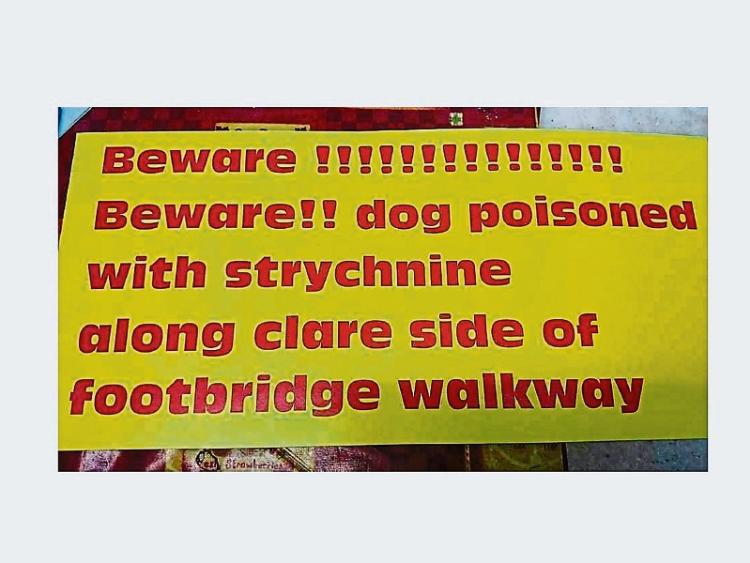 One of the signs up in Castleconnell and Clonlara

THE OWNERS of one of the four dogs killed locally by poison have erected warning signs.

Catherine Deere, Castleconnell, said her son Shane was walking Patch (1½) on the Clonlara side of the river, near the bridge.

“They were just walking along as normal. Shane used to walk him every day. When they came home Patch went out the back and a few minutes later he just tumbled over. I thought it was an epileptic fit,” said Catherine.

“John knew straight away it was poison. Patch was dead within half an hour. It is a terrible thing to happen. He was a lovely little terrier - he is sadly missed,” said Catherine.

It is every dog lover’s worst nightmare – seeing their pet in convulsions and dying in distress.

Patch was poisoned on February 21 and John took to Facebook on the same day as it was the third such incident he had seen.

“Just be careful if walking your dog in the Clonlara / Castleconnell area. There is still someone putting poison down on the public walks there.

"They are using a mixture of strychnine and rat poison in a very concentrated form and it has been impossible to save any that have come in to us. If anyone has any suspicion as to who is doing this please contact your local garda. This person needs to be caught.”

John says the owners don’t see the poison as it is contained in a biscuit or something else small.

“They aren’t eating a big pile of bones or anything like that. We had two of them tested and they came back positive for strychnine and rat poison. They are using it in huge doses. Strychnine is illegal in Ireland,” said John, who stresses that these are not people walking their dogs through farmers’ fields but on public walkways. Catherine said her other son Pat has put up warning posters down by the bank and in the village.

“We don’t want another dog to go through what Patch went through. We had dogs for years and years and nothing ever happened to them.  We always took them for walks down there,” said Catherine.