Michael Noonan: 'I have nothing to do with Grace case' 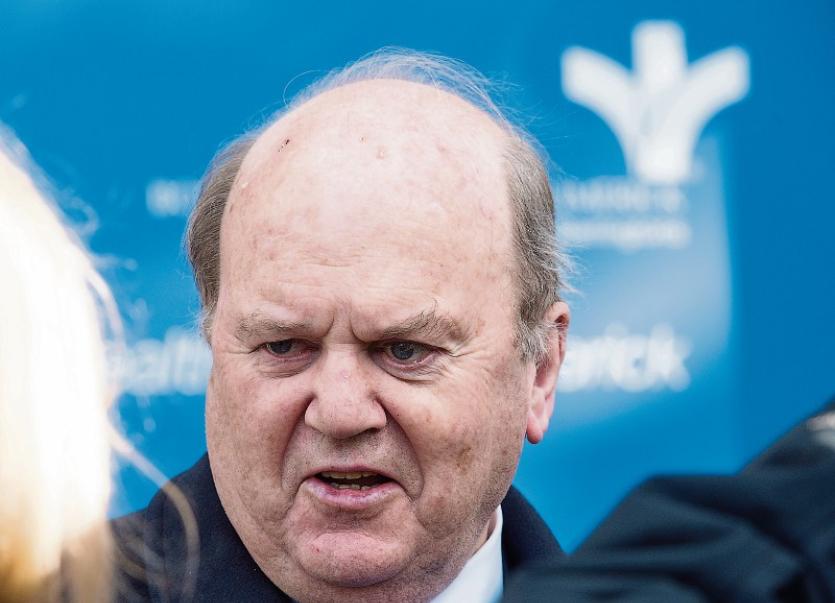 Michael Noonan in Limerick at the opening of the Bon Secours Hospital Picture: Andrew Downes

MINISTER for Finance Michael Noonan has said any suggestions that he may have to step down as a result of an inquiry into his involvement in the 'Grace' case are “ridiculous” and “very unfair”.

Minister Noonan, who is due to be examined by the commission of inquiry, told the Limerick Leader that “it was a coincidence” that he was Minister for Health at the time.

He previously explained that he passed on the correspondence he received to the relevant authorities, and has repeatedly denied any wrongdoing in the case.

Asked by the Limerick Leader if the commission of inquiry could put pressure on him to step down early from the party, Mr Noonan replied: “I don't see the connection. That's a ridiculous question. I have nothing to do with the 'Grace' case.

“I have made public statements on this already, and I have nothing to add to the statements I’ve made already.

“I always cooperate with any commission of inquiry. It was a coincidence I was Minister for Health at the time. I have had no direct involvement whatsover in the 'Grace' case.”

He said he did not watch Claire Byrne Live, which was broadcast on Monday night on RTE, which focused on the ‘Grace’ case.

The Minister added that certain elements of the media are “trying to make a connection between my future and the 'Grace' case and there's absolutely none.”

He added that it was “very unfair” to pursue that line of questioning.

Last month, he confirmed he was made aware of the Grace case around 1996 and the matter was passed on to his junior minister, Austin Currie.

“We were told that the young woman in question, or young child in question, had been removed from the foster home,” he said.

“Some weeks later, it transpired that the South Eastern Health Board officials, who had made the decision, had reversed the decision for some reason.”

The inquiry, which was established this Tuesday, will centre on a decision to remove 'Grace' from her foster home in the southeast in 1996 after allegations of abuse, and the subsequent reversal of that decision after representations were made by the foster father in question.

'Grace', who has severe intellectual disabilities and is unable to speak, remained in the care of the foster family for 20 years, until July 2009, despite repeated allegations of physical and sexual abuse.

She was one of 47 children the family cared for over the years.

The foster father wrote to Mr Noonan, who served as Minister for Health at the time, in August 1996 asking him to intervene in the case to ensure that 'Grace' remained in their home.

The extent of the contacts made with Mr Noonan, the former minister of state Austin Currie and Department of Health officials will be examined by the commission.

Mr Noonan was also the subject of widespread public criticism this week when he appeared at the official announcement of the takeover of Barringtons' private hospital in Limerick by the Bon Secours Health System, given to the connection of the religious order to the scandal in Tuam.

“The Bon Secours hospital group are not the convent. Months ago I was asked to do this and agreed to do it.”

His appearance outside the hospital was also criticised in the Dail by the People before Profit deputy Brid Smith, who claimed that the Bon Secours group, now the largest private hospital group in the country, “was built on the bones of the dead Tuam babies.”

Minister Noonan said that if deputy Smith is confident in her assertions she should make them without Dail privilege.

He also dismissed suggestions last month relating to his possible early retirement, in line with a heave against the Taoiseach, as “fake news”.

Financial correspondence for the Bon Secours Health System company shows that at least one member of the order is still director of the company, while two other nuns resigned from the company in 2015.

Labour deputy Jan O’Sullivan said that the terms of reference of the ‘Grace’ inquiry need to be expanded to include other children who came under the case of the foster family in question.

She said there needs to be clarity about why the decision was made to not remove ‘Grace’ from care, and who made that decision.

Deputy O’Sullivan said the case also begs the question of the welfare of over 2,000 children under the care of the State who have not been assigned a social worker.

"There are still many vulnerable children out there in the system," she said.

"We have to get to the bottom of issues, such as those in the 'Grace' case, and the Tuam babies, for the sake of their families, and for people to have confidence in the system, in terms of how we care and look after the most vulnerable of children."