Limerick woman Bridie enjoys a Baileys on her 105th birthday 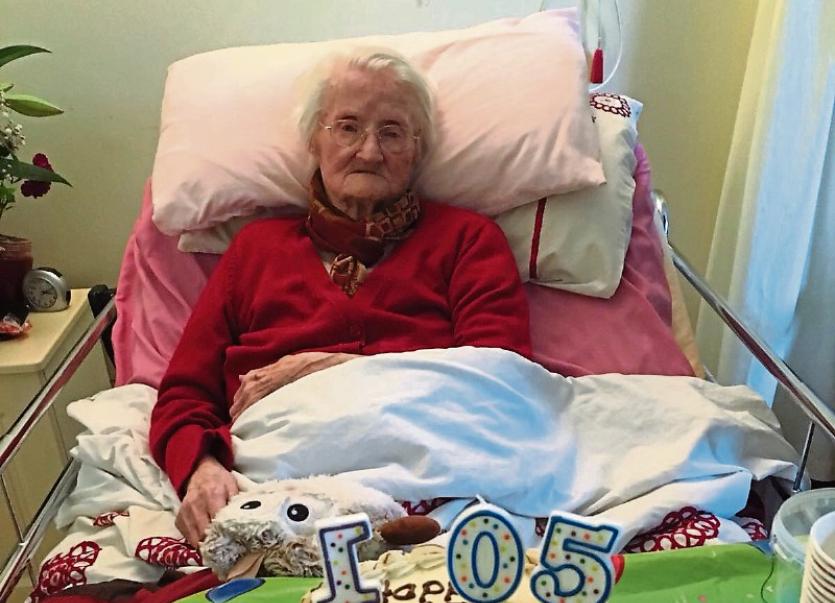 Bridie pictured on her 105th birthday

A DROP of Baileys liqueur in her coffee every night could be the secret to the longevity of Bridie MacNeil, who has celebrated her 105th birthday.

The fierce will, good humour and strongly held principles of the Glin lady could be other reasons, as she is among the few to have turned down a gift of €2,540 – the centenary bounty – from President Michael D. Higgins upon reaching her milestone birthday.

She is one of just fifteen 105 year-olds in the State, according to the office of the President, which awards the centenarian bounty for those aged over 100.

Bridie MacNeil (nee McNamara) was surrounded by close friends and family in the Oaklands nursing home, just outside Listowel in north Kerry, as she celebrated her 105th on St Valentine’s day, February 14 last – toasting the occasion with her tipple of choice – Baileys.

The third eldest in a family of nine, she has now outlived her fellow eight siblings.

“She loves a drop of Baileys,” her niece Breda Culhane told the Limerick Leader. “She has it in her coffee at night. She says it helps her sleep.”

“She never smoked, has a great appetite, isn’t fussy about food, and loves her dinner. She has always loved reading Maeve Binchy’s novels, but has given up on watching the soaps on TV,” she added.

Having lived in America and Canada for over 80 years, Bridie felt that she wasn’t entitled to or deserving of the once-off gift bestowed on all Irish citizens aged 100 and over, she explained.

While her family submitted the relevant documentation for her to receive the bounty, Bridie declined to accept it, even when a clerical officer travelled to west Limerick to confirm she was still alive and had reached 100.

Instead, Breda said Bridie “adored her American passport, and cherished receiving a letter on her birthday from the American Embassy in Dublin”.

She said Bridie grew up in an era when people weren’t entitled to things for free, which was especially ingrained in her when her mother was widowed when her youngest child was nine months old.

“She often speaks about meeting Rose Kennedy in Boston, and she has great to mollycoddle the young Irish priests when she met them in the big houses.

“Even at 103 she kept saying she wanted to go back to America, but when she was there she always spoke about coming home to Ireland. She always described herself as an Irish-American,” she said.

After working in factories in Boston, and as a chaperone to wealthy families, she married in her 50s, had no children, and moved the 660 miles away to Nova Scotia, where her husband, Don MacNeil, had a farm.

Born in Cahara, Glin, in 1912, Bridie returned home to west Limerick after the death of her husband in 2002.

Aged 17, she boarded the RMS Carinthia in 1928 –  a British Cunard Line passenger ship which was later sunk in 1940 – along with her sister Anne, as they sought to find a better life in America.

After spending 30 years in Boston, where she met her husband, they moved to Nova Scotia in Canada, and lived there until his death 15 years ago. Her sister Anne, who made the life-changing voyage with her, married an Italian and lived in Boston all her life.

When she moved home, Bridie lived with her niece Breda and her husband Jack Culhane at Cahara until four years ago.

A spokesperson for the President’s office confirmed that as of May last, their most recent available figures, there were three 108 year-olds living in Ireland, four 107 year-olds, and fifteen 105 year-olds.

In 2016 the office awarded bounties to 241 people in Ireland aged 100 or over, and a further 176 Irish born nationals living outside the State, totalling 417 Irish people aged over 100.

They included 214 people living in Ireland, and 190 living outside the State, predominantly in the UK and the US.

The oldest known living Irish person was 113-year-old Kathleen Snavely, from Feakle in Clare, who passed away in New York in 2015.

There are currently no reported living supercentenarians – those aged 110 or over -from Ireland.