Get Involved in walking in West Limerick 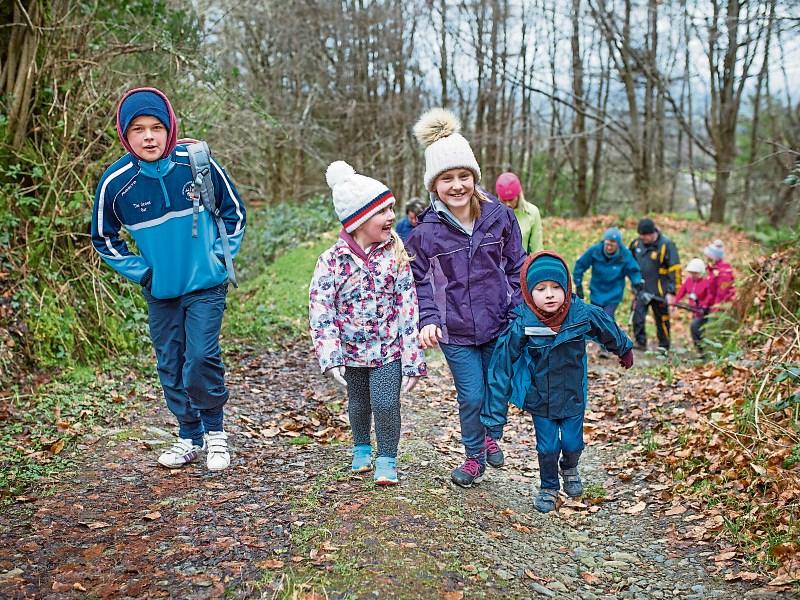 Precisely why am I doing this again? That is the question I am asking myself as I leap from my Sunday morning slumber and prepare to travel the 56km from the city centre to the West Limerick village of Ashford.

I have – in my wisdom – agreed to join the Broadford/Ashford walking group as they did their monthly walk through a beautiful, yet often unheralded part of west Limerick.

On the second Sunday of each month, a hardy band of walkers meet in either Ashford or neighbouring Broadford and hold a walk around the mountains, hills, and boreens which shadow both villages.

A committed group of volunteers have revitalised the former walking routes around the two villages, with information boards, and guided walks in the hope of attracting more tourists.

Sean Neenan, who hosts the walks, tells me after my arrival that although the walk is strenuous in parts, the views will be “worth it”.

Spotting my fatigue following my own late night expedition to Nancy Blake’s the previous evening, Corina Sheedy from Broadford says: “It’ll blow the cobwebs away without doing any permanent damage.”

“Well that’s the theory anyway,” her friend chimes in with a smile.

Led by Sean, Julie O’Sullivan and a committed group of volunteers, the Broadford/Ashford walking trails – initially devised in 1999 – have been significant enhanced.

Six nationally recognised trails have been developed within the Mullaghareirk mountain range. The routes vary in distance between 6km and 20km and have been carefully selected to provide spectacular views over Limerick. All routes are fully waymarked with illustrated storyboards.

This particular group is the Limerick Leader’s representative in this year’s Get Involved contest, a national initiative aiming to recognise sustainable enterprises. The walks are well attended by members from the local community.

“The intake varies a lot according to the weather,” says Sean, who is leading the trail today. “And what’s been going on the night before! It’s often easier to get groups off-season rather than on-season.”

We pick walk number three, the six km Gortnaclohy Loop, which takes in the steep Cobs Road, which leads to the Mass Rock, where people worshipped in feudal times, and further into a dense forest.

“That’s the toughest part of the walk out of the way,” Sean reassuringly tells me as we reach the top of the road.

It was worth the effort though, for we are greeted with a wonderful vista of Co Limerick and its neighbouring counties.

Despite the mid-morning mist, the Galtee Mountains are clearly visible, as are the villages of Broadford, Ashford and Dromcollogher in the valley below.

Later on, Michael Manley, who allows the walkers access to his land in the latter part of trail, added: “It’s a beautiful area. You know if you have a clear day, you can see the roof on Thomond Park. If there’s a game on a clear night, you’d see the floodlights”.

Among the hardy band of walkers are Kathleen Barry, who is a member of the committee which developed the walks.

“It gets me out of the house. It allows me to meet all the local people, and introduces me to new people,” she explains.

Gesturing at a gaggle of youngsters running, she adds: “It’s great to be able to get to know all these people.”

Ben Noonan, also from Broadford, hit the hills with his daughters Orla, 9 and Aoibhinn, 5.

“It’s great for the kids to get them out. You’re meeting people too. It’s a good start to a Sunday – and it brings up the auld appetite too,” he smiles.

Ben also explains that because his children are with their friends from school, it takes the hard work out of encouraging them to tag along.

“They don’t miss the miles when they are together. It’s an example of where there are numbers, things become easier.”

There is excitement mid-way through the walk when the clatter of horses sounds in Ashford, with a hunt in full swing.

“Look at all the horses – just look at them jump the fence,” Ben’s five-year-old daughter Aoibhinn beams.

It costs around €2,000 annually to maintain the six mainly off-road walks around Ashford and Broadford.

Money raised from various local events – like table quizzes – helps pay to ensure stiles are added where necessary, and the walkways remain clear of weeds, overgrown grass and debris.

As we descend down to Ashford Village again, it is back to the Village Inn for a well-earned coffee and sandwich.

“Will you be joining us again,” Sean asks me. While I may have hesitated ahead of the walk, there is no doubt I will be back!