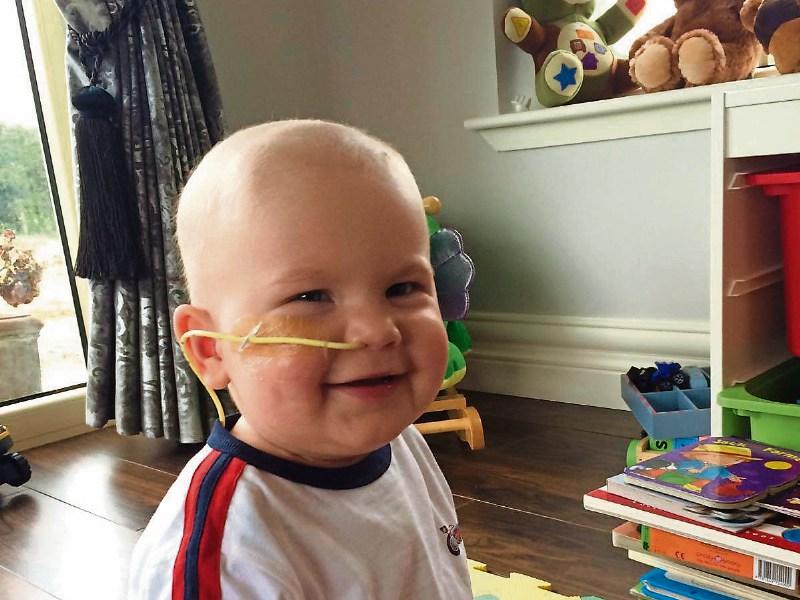 Two-year-old Evan Jones, Newport, ‘Taken from this world but not from our hearts’

TWO YEARS ago Fr John O’Keeffe baptised Evan Jones but this week he had the tragic task of saying his funeral Mass.

A photograph of Evan was placed on top of the tiny coffin in the grief-stricken Church of the Most Holy Redeemer in Newport.

“​Taken from this world but not from our hearts,” was Fr O’Keeffe’s message throughout his moving homily during Mass of the Angels.

The two-year-old boy, who touched the hearts of an entire community, was tragically laid to rest this Monday in Rockvale Cemetery.

Evan passed away peacefully at his home, surrounded by his loving family, on Saturday.

He will be for ever cherished by his loving and heartbroken parents Paddy and Marisa, baby brother Ben, grandparents Tony and Anne Murray and Paddy and Kathleen Jones, uncles, aunts, cousins, relatives and friends.

When Evan was 20 months-old it was discovered that a large tumour was growing in his neck. Up to then he was a happy go lucky and healthy child. Doctors felt that it was too risky to operate so Evan was immediately put on chemotherapy.

Unfortunately as this did not reduce the tumour as had been hoped, it was decided that a high risk operation to remove it was now the only option.

After a long, harrowing nine hour operation the tumour was successfully removed to the delight of everyone. But the happiness was short-lived as the biopsy result confirmed that Evan had a malignant Rhabdoid tumour – a very aggressive and rare form of cancer mainly found in children under two.

The Team Evan Jones committee was formed to raise money for his treatment and a possible stem cell transplant. Somehow Evan remained a happy and carefree child, as the gorgeous photos show, despite everything he had been through.

Aged just two years and three months, his heart breaking battle ended on Saturday but his memory will live on. Such was the love shown for Evan that the committee’s target of €40,000 was far exceeded last year. Over 1,200 took part in a fun run and 450 attended a packed benefit night and auction.

It reads: “Your wings were ready but my heart was not. Rest in peace little Angel.”

Fr O’Keeffe recalled March 1, 2015 when Evan was baptised and the joyous occasion it was.

“He was clothed in his white garment to bring his Christian dignity unstained into the everlasting life of heaven. That came way, way too prematurely for him.

“The reason why he won so many people’s hearts was he was such a brave, brave little boy,” said Fr O’Keeffe.

His thoughts and prayers, as were everyone’s in the full church, are with Paddy and Marisa and their families through this terrible time.

The Limerick Leader’s Facebook page has been flooded with personal tributes.

They include “Spread your wings and fly little man”; “Your little brother Ben will know that you are the best, bravest, big brother ever” and “Beautiful little Angel, my heart breaks for the family. Rest in peace beautiful boy”.