Limerick artist's work on display in the Hunt Museum

Donald Teskey's exhibition is currently on in the Hunt Museum, but the art world has yet to fully recover, he tells Anne Sheridan 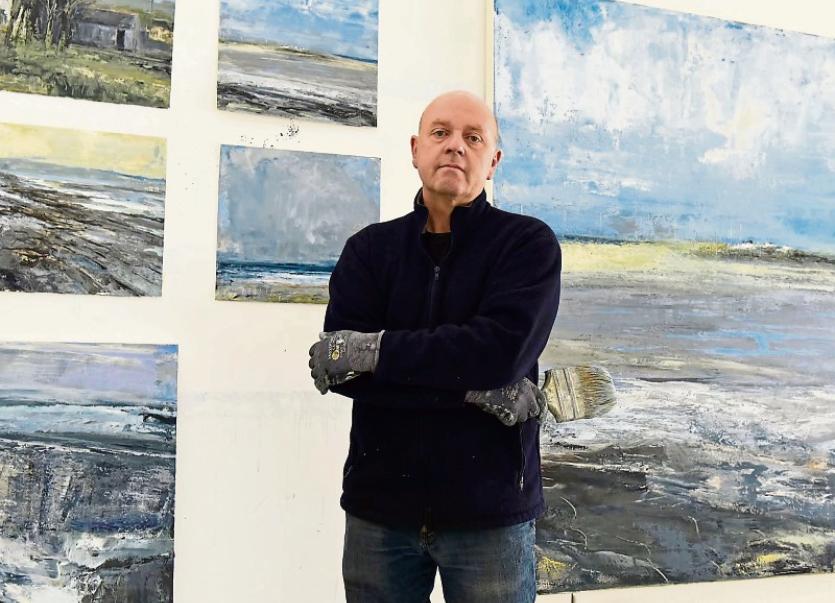 Aged 17, Donald Teskey stood gazing at the works of the great Jackson Pollock and Frank Stella in the Guggenheim and Museum of Modern Art in New York.

Each summer he would return for four years to broaden his mind, his own creative palette, and soak up the work of a diverse array of artists, whose paintings are evidently uniquely theirs.

He was struck by the Italian artist Giorgio Morandi’s still life arrangements, and the haunting realism of Edward Hopper.

Now, Teskey’s own work captivates others. In the Hunt Museum, four red dots have been placed on the wall next to his individual works.

By Sunday week, all 25 pieces will be removed, and the four most coveted canvases to date will find new admirers, in expensive homes, on expansive walls throughout the country and overseas.

There was a time when every work by Teskey, a Rathkeale native who has lived in Dublin since 1979, garnered the red ‘sold’ dot, and in Limerick, where his exhibition, Weather Gauge, is still running, buyers clamoured towards his biggest and most expensive work.

“Not bad, considering,” he said, but certainly not boom worthy.  “It’s very much a reflection of the times,” he says given the depreciation in the art market.

Weather Gauge is a continuation of his seascape theme, inspired by the wild coastline of north Mayo.

When he wished to escape Dublin during the boom, “when traffic became unbearable and people became even more unbearable,” his refuge came when he accepted a residency place in Mayo in 1996, at the Ballinglen Arts Foundation at Ballycastle. “The people, the landscape” continue to draw him back.

And it was an experience that would change his artistic strokes, having previously been focused on dereliction in Dublin city, or more particularly the “wildernesses that exist in the derelict spaces between buildings.”

Viking areas of Dublin, the Guinness breweries, the Liberties, around the Liffey, Amien Street, are still an attraction, as are areas of Kerry, particularly Valentia Island. But none are as magnetic as Mayo, where he sees elements of his earlier cityscapes mirrored in nature.

“The elements of the coast were almost like an echo of what was happening in the city, but in nature. It was so rugged and so elemental there was an almost architectural structure to it.”

Aside from fluctuations in the art market within the last decade, artists of his era have had other challenges to contend with. As an emerging artist in the 70s, he said the Peace Process transformed how Irish artists were considered.

Only after The Troubles subsided did the London market, in particular, become “much more accessible to Irish artists” when they “felt comfortable working with Irish artists”. Doors and cheque books finally opened.

His first London show in UK in 1996 led to a “wonderful relationship with collectors”, which has continued for over 20 years, and where he continues to be represented by Art First.

He first exhibited in Dublin in the Lincoln Gallery, on Lincoln Place, and moved up to the capital on the strength of that show, with his first solo show in the Rubicon gallery on St Stephen’s Green.

Teskey went on to teach life drawing in the art college in Mountjoy Square, now part of DIT, all the while focusing his drawings of inner city dereliction.

His style evolved, “became looser, more expressive”, and he went through a transitionary phase of exhibiting very little while he honed his new style.

His career trajectory, he says, has largely all been highs, the most striking of which was seeing his work tour the US in the 90s for three years, after being selected by the prominent New York curator, Lucy Lippard.

After the Limerick show concludes, another solo show is in the offing at Oliver Sears Gallery on Molesworth Street in Dublin, as well as producing work for art fairs in London and New York.

Having an enthusiastic audience, he says, is a great motivator. It also provides a sense of validation, something, he says, every artist needs and desires.

Best-selling authors may earn a pittance in spite of producing award-winning works, but artists suffer an equally “poverty stricken” fate.

Following recent comments by author Donal Ryan that his succession of award-winning novels have not made him a millionaire, and he has forced him to return to his day job in the civil service to help pay his mortgage, Teskey too echoed his views.

While he has seen individual pieces sell for up to €60,000 and saw sell-out show after sell-out show in the boom, he said he is “absolutely not” a millionaire, and has called for greater State support and philanthropy for those working in both the visual and print arts.

“It is the case for visual artists, that very few can make a living from art, not just artists starting off, but those well into their careers as well who still find it a struggle.

“I'm very fortunate in many ways that my work connects with people on many different levels,” the 60-year-old member of the Royal Hibernian Academy (RHA) told the Limerick Leader.

“Even doing well as a successful artist in Ireland is being able to not struggle basically. I don't think there are any millionaire artists in Ireland, or ever were. If you think as an artist you’re going to make a great living from it, you’re in the wrong profession.

“It takes a really long time to make a living as an artist, and that's if you ever do. You could building up a strong visual identity and still spend your career in poverty.”

In a constantly changing art world, he sticks to what he knows, loves and does best, saying that any attempts “to capitalise on trends would be a terrible mistake.”

“You can be riding a crest of a wave, and then drop out of people's consciousness, but it will eventually come back around again.”

Accumulating a mountain of money has never been this artist's main motivation.

“I never felt that being a commercial artist was central to what I was doing. I wanted to create work that people responded to and reached out to, rather than looking at the price-tag.

“Art is about making someone feel something. If you look at a Picasso or Monet or Van Gogh, it’s not the value of the painting you’re thinking of when you look at it, it’s how it makes you feel.”

While there are some people who remain deeply committed to buying art, Teskey said “vast swathes of buyers just vanished in the recession.

“Now, it's a case of two steps forward, one step back, and it's hard to know what awaits us. It's very hard for young artists at the moment, but I don't know if it’s as hard as when we came out of college in the '70s and '80s, but there’s a whole different world now.”

Teskey's advice to emerging artists is to “find your voice as an artist and stick to your guns, and just hope you can survive, and ride out the good and the bad times equally”.

He immediately moved to Dublin after graduating from a four-year diploma in Fine Art from the Limerick School of Art and Design in 1978, where he studied under Charles Harper, then head of painting, to further his career.

The 1990s were a “wonderful environment for artists”, when there was steady support for the arts, but it changed in the early noughties when a “frenzy of buying took off in the new millennium”.

“From about 2002 on, there was suddenly a new type of buyer, with people interested in buying art, seeing the potential to make some money, and flipping it at auction.

“The auction houses evolved into manipulators of the market. This changed things enormously for artists, because prices needed to go up in line with what paintings were getting at auction, and they doubled almost within a very short space of time.

“The same thing was being replicated in the property market and it got really out of hand. Certain people wanted to become dealers, and you had a whole new class of buyer that you had to be very wary of - you had to protect yourself from being exploited or manipulated, and your loyal customer base as well, who wouldn’t sell your work on for a profit.

“It just got ridiculous and you felt like shutting down and not putting anything out there. And then, for many people, it went back to square one.”

At the same time, it did a huge amount for his profile and others, with his name becoming “a currency” in the art world in Ireland and internationally, which he agrees was one of the “paradoxes” of the time.

“What you really wanted was a nice steady progression like in the 1990s, without going over the top.”

Represented by Oliver Sears gallery in Dublin, Art First in London, and Dolan Maxwell in Philadelphia, his work has also sold at Sotheby’s for over €28,000.

Born in 1956, his family’s ancestors, the Palatines, Protestant refugees from Germany, came to Limerick in 1709.

One of four children born to Maureen and Norman, he no longer has many family members living in Limerick, bar an aunt in Adare. Equally, Limerick hasn’t featured in any great shape or form in his work to date, but he hasn’t ruled out that changing in the future.

“It’s not for the want of looking. There are so many striking and quite beautiful parts of Limerick that I look at and wonder how I can do it, but I’d need to live in Limerick for a while to do it. When I was growing up [in Rathkeale] that whole hinterland was quite influential, and that appreciation of nature and the outdoors was something I absorbed and took with me from my father.”

“The brooding intensity of the sea” in Mayo will undoubtedly prove more of a draw, following on from this series, which Naomi O’Nolan, acting director of the Hunt Museum, has said “are amongst his finest works yet”.