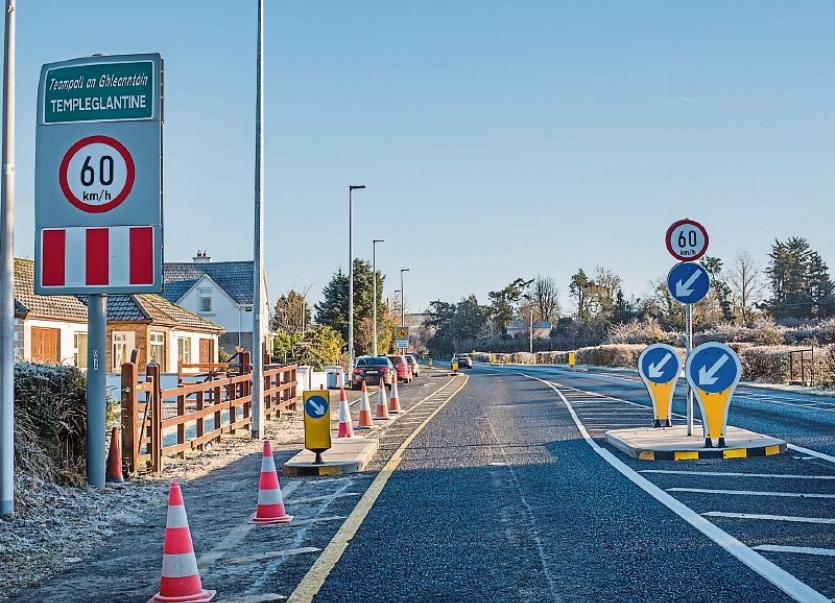 The problematic western approach to Templeglantine on the N21

A REVIEW of traffic calming measures on the N21 at Templeglantine has prompted proposals for changes to the existing system.

At a meeting of Newcastle West Municipal District last week, councillors were assured that the proposed modifications would solve the problems highlighted by them since the project was completed in 2014.

Councillors had called for a review because of mounting concern about accidents and near-misses, at the start of the traffic calming measures at the west end of Templeglantine.

The single biggest problem, Cllr Michael Collins said, was the line of the road at the Abbeyfeale side of Templeglantine. It forced traffic to the right almost into the path of oncoming traffic, he explained.

As part of the review, council official Deirdre Clarke told the councillors, day and night times visits were made to Templeglantine and a speed survey and accident survey was carried out. That survey showed that 85% of cars drove at 74kph or lower while 85% of trucks drove at 72kph or lower in what is a 60kph zone, she said. The data for accidents, given just one year of operation, was insufficient to draw conclusions, she added.

“I think that is a waste of money,” Cllr Liam Galvin protested. The design was wrong the first day, he argued and the modifications would not change that.

Engineer Ger Carey, however, explained that the roads authority, Transport Infrastructure Ireland was “not keen” to straighten the line of the road from the west. Rather, he said, they were very keen on chicanes, forcing traffic to travel through an S shape and ultimately to slow down.

But Cllrs Francis Foley and Seamus Browne said they were prepared to accept the professionals’ advice. “at face value”.

poses placing bollards near the pedestrian crossing in front of the Devon Inn Hotel to improve sightlines for drivers and ensure greater safety for pedestrians.