'John 3:7' returns to the terraces after two year hiatus

Castletroy man Frank Hogan preaching 'the heart of the gospel' 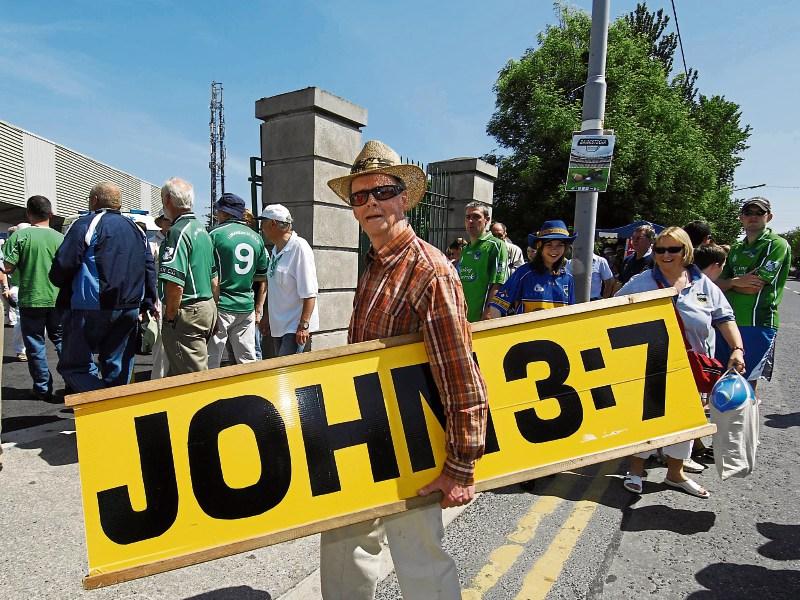 “DO not marvel that I said to you, you must be born again” - John 3:7. These are the words that Frank Hogan, Castletroy, has preached across countless GAA terraces over many years with his famous sign.

Frank Hogan describes himself as a great hurling fan going to many a GAA game. But recently he went through a two year hiatus due to a breakdown in health related to his heart.

“I was up at a Mayo game in Castlebar and I was not feeling well. I got a taxi to take me to the bus but I collapsed on the floor of that taxi. A Garda came and gave me CPR and only for her I was gone” said Frank.

Despite this setback, Frank Hogan has set his mind to coming back and preaching the verse that he calls “the heart of the gospel”.

”Thankfully I was there to see Kerry win their 37 in 2014. It was appropriate given that my message was chapter 3 verse 7 from John’s gospel.

“I like holding it up in front of RTE, it’s like a silent witness, it has a mystery surrounding it and people can look it up if they want."

However this was not always the case, Frank initially started off with a John 3:16 sign but “people kept on asking me at a Michael Jackson concert, touching my arm all the time and asking about it. It is a very long verse so I couldn't get it out. That’s when someone showed me John 3:7”.

The influence of John 3:7 goes far beyond the GAA community as Frank explained that “people are holding up signs of the passage on streets of Romania and India, people in Israel are also doing it but instead with John 3:22”.

Over the years Frank has stood amongst many fans from all 32 counties in Ireland at different Gaelic games events. He mentioned that his favourite fans belonged to Cork, Kerry, Mayo, Derry and Kilkenny .

When asked what Frank is most looking forward to about his return this year, he responded that it would be Tipperary winning the All-Ireland final in hurling - but he wouldn't mind if Limerick won it either.