WATCH: Limerick schools ready for the 10@10 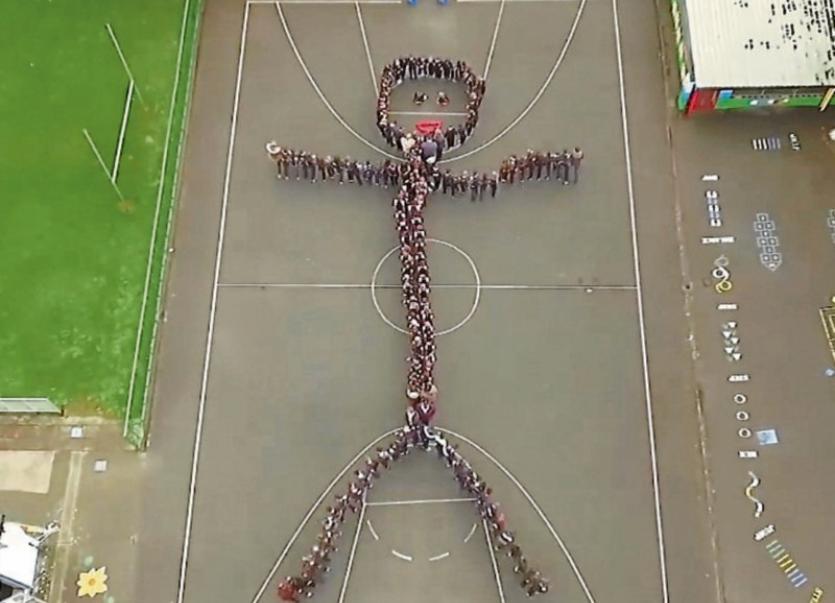 NOT ONLY does Limerick have a leader on Operation Transformation in Marie Grace but schools are pulling out all the stops to promote 10@10.

It is a fun and simple classroom programme for pupils across the country to do 10 minutes of exercise this Friday, February 10 at 10am. It also celebrates Operation Transformation’s 10th anniversary.

Knockea, Caherconlish and Caherline National Schools are just three to sign up. In Caherline they made an amazing aerial video of a giant stick man - doing jumping jacks and a keepy uppy!

The 181 boys and girls all took part in the display. It was filmed using a drone and directed by teacher Bridget Lambert. The school made the video for Operation Transformation's 10@10 which takes place tomorrow.

Schools can download an exercise video at www.rte.ie/ot or they can decide on their own creative way to get moving like Caherline NS.

Boys and girls from Knockea and Caherconlish appeared on last week’s show. Eoin Maloney, a teacher in Caherconlish, said it is a great idea to help get children moving.

“This Friday, Caherconlish National School will be doing the mile challenge as shown on last Thursday’s episode. We’ve measured that 13 laps around the school is a mile and pupils from all classes will walk, run or jog around the school in order to hit our target of one mile.

“We know that if we can make exercise enjoyable and get children moving during the day then they are more likely to be healthy and make better choices. We’ve been doing this for a while now and it is a a regular part of the school day,” said Eoin.

They contacted the show before Christmas to tell them about the different activities they provide to help get pupils active, such as the mile challenge, fitness club, pilates and RDS Science Projects, which always have an active theme.

”We had brilliant fun from the moment the film crew arrived and we really loved seeing all our faces on TV last Thursday evening,” said Eoin, who encourages all schools to get moving this Friday!

Niall Shanahan, a teacher in Knockea National School, said they were delighted to welcome Operation Transformation.

“Before Christmas the whole school performed the Haka in the gym and we sent on that video, along with others in the hope that it would be shown on TV. The children were very excited when we got the call that they would be calling to our school,” said Niall, who added that they are hoping to get the Health Promotion Flag this year.

They have a busy few months ahead as activities like super brain yoga, walk a mile with a smile, 30 day activity challenge, zumba, yoga and a family fun day in May are all in the pipeline. They will also be exercising the brain with meditation and mindfulness.

Before Christmas pupils did a 5km run in UL in aid of the homeless and for the 10@10 they will be doing zumba dancing which the children “really love” said Niall.

Operation Transformation has teamed up with Active School Flag to promote physical activity in primary schools. Any school that completes the 10@10 will get a tick towards gaining the blue flag,