Over 100 protestors voice opposition to US President's anti-immigration policies 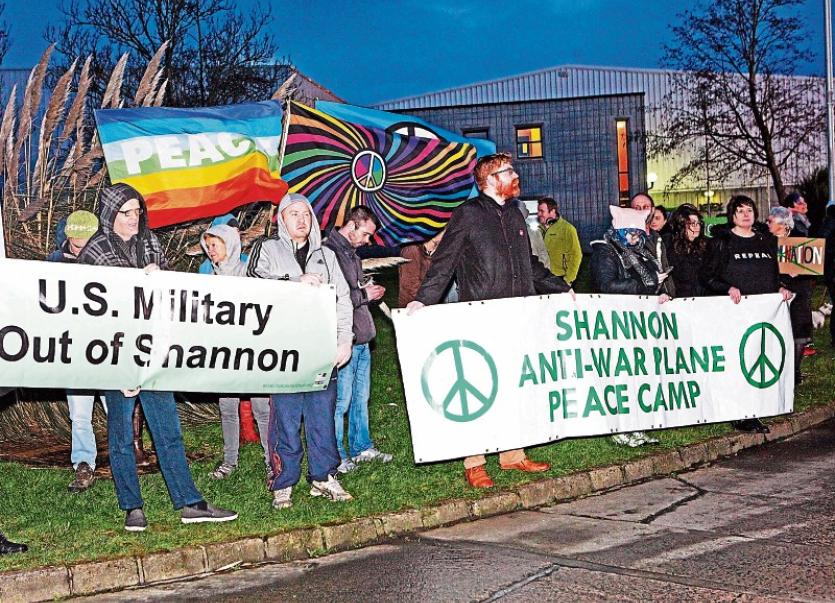 Around 100 people took part in the protest at the entrance to Shannon Airport - Pictures: Dave Gaynor

SOMETIMES the world is most clearly seen through a child's eyes.

Luke O'Neill, age 5, was among over 100 protestors who turned out at Shannon Airport this Thursday evening to protest not just against US President Donald Trump's anti-immigration policies, but against the president himself.

What does he think of the most powerful leader in the Free World?

"I know he's the new president, but I think he's mean and we should to stand up to him," said the little boy from Pallaskenry, county Limerick, with a shock of golden curls, and carrying a banner declaring 'Love trumps hate'.

His mother, Alanna, laughed. "I don't know where that came from. I haven't prompted him, I swear," she told the Limerick Leader.

"It's just ridiculous; it's just racism," she said of Trump's travel ban against people from seven predominantly Muslim states.

"There's no empathy. It's just wrong on so many levels. The fact that it's happened before, and we've read this from history, and said 'If I was there', this is our chance to stand up. We're all one race, the human race. What he is doing is pathetic; it's disgusting," said the Galway native, and a regular protestor with the Shannonwatch group at the Mid-West's translatantic gateway to the Americas.

Five-year-old Luke O'Neill from Pallaskenry: 'Trump is mean and we have to stand up to him', at Shannon Airport protest, @Limerick_Leader pic.twitter.com/kObFkFoE0M

Gerben Uunk, a former election candidate with the Green Party, created his posters on the back of his old campaign posters, with the banner: 'No shamrocks for racist langers.'

The Dutch native, who lives in Newmarket-on-Fergus, county Clare, said he moved to Ireland because of its "supposed" historical neutrality in world affairs.

Another protestor, Joanna Thompson, from Belfast, who is opposed to Shannon Airport being used by the US military as a stopover en route to the Middle East, said: "I think Trump is a disaster, but I think Obama, the Clintons and the Bushes were disasters for the world as well. The US military's bombing campaign in the Middle East is causing the refugee crisis, and now we're banning those same people from seeking a safe refuge."

Sarah-Jane Hennelly, chairperson of the Social Democrats in Limerick city, said she was there to stake her general opposition to Trump in general.

"I personally and fundamentally disagree with his views. There is a huge amount of anger and shock and disbelief out there," she said.

Leonie Kerins, director of Doras Luimni, the Limerick based human rights and support group for all migrants living in the Mid-West, said they are "shocked, horrified and surprised by Trump's executive order, and the rapidity with which it was brought into force.

Folk-singer Emma Langford, from Limerick, said: "I can't stand absolutely anything the man does. He has zero sense of humanity. Everything he does is founded in racism, misogyny and prejudice, and I'm not willing to tolerate it. We need to be the voice for people who can't stand up for themselves and be heard.

"I am weary of so many of our politicians pandering to what the US is doing. I have mixed feelings about the Taoiseach meeting Trump on St Patrick's day. I understand that there's a certain amount of diplomatic expectation that has to be met, but at the same time he should express our beliefs as a people and as a nation, and have a chat with him about his nonsense," she said.

"I don't think Enda should meet Trump - it's just for economic interests and I think a lot of Irish people would take an economic hit to make a stand such as this."

Tracey Hestor, from Corofin, north Clare, said she believes Trump is a "dictator, misogynistic, narcissist. I know he was voted in in a democratic society but I don't think he's being democratic about what he's doing."

American Janet Beuell, from Boston and living in Corofin for the past four years, said she was present to "represent my own people and the reasonable people who did not vote for Mr Trump. He has come in as the least popular president ever. I am distressed that my country is looking the way it is, and we did lose the popular vote. I am scared for the world. Time will tell."

John Lannon, of the Shannonwatch group, said: “Shannon and Dublin’s complicity in allowing the US to deny entry to approved refugees, asylum seekers, visa holders and even US legal residents is shocking.

“We call on Taoiseach Enda Kenny to express Ireland’s revulsion at the bans imposed by President Trump, and to ensure that the Irish airport authorities and Gardai do not facilitate this unjust and discriminatory order in any way,” he added.

US immigration pre-clearance at Shannon Airport is currently implementing the ban, despite claims from anti-war groups that it puts Ireland in breach of Irish and EU anti-discrimination laws.

Also present at the protest, Limerick Anti-Austerity Alliance councillor Cian Prendiville said that Trump's travel ban "is an openly racist act" and targeted predominantly at Muslims, whom he said, "have been consistently scapegoated and targeted by Trump."

There have been widespread calls in recent days for both pre clearance facilities in Shannon and Dublin airports to be reviewed in light of Trump’s order that halted the entire US refugee programme for 120 days, indefinitely banned refugees from Syria, and blocked entry for 90 days for citizens from Iran, Iraq, Libya, Somalia, Sudan, Syria and Yemen.

Earlier this week, the former chief executive of Shannon Airport, Neil Pakey, voiced his opposition to removing US pre-clearance facilities in Shannon and Dublin, saying they are are of "massive strategic importance for Ireland" and "a unique selling point for business in the region."

“Shannon and Dublin are the envy of airports across Europe. It does make Ireland more competitive,” he said.

The protestors, however, called for the morality of Ireland, a nation of emigrants, to trump any monetary gain.