'Taoiseach should meet with Trump on St Patrick's day', urges Minister for Finance 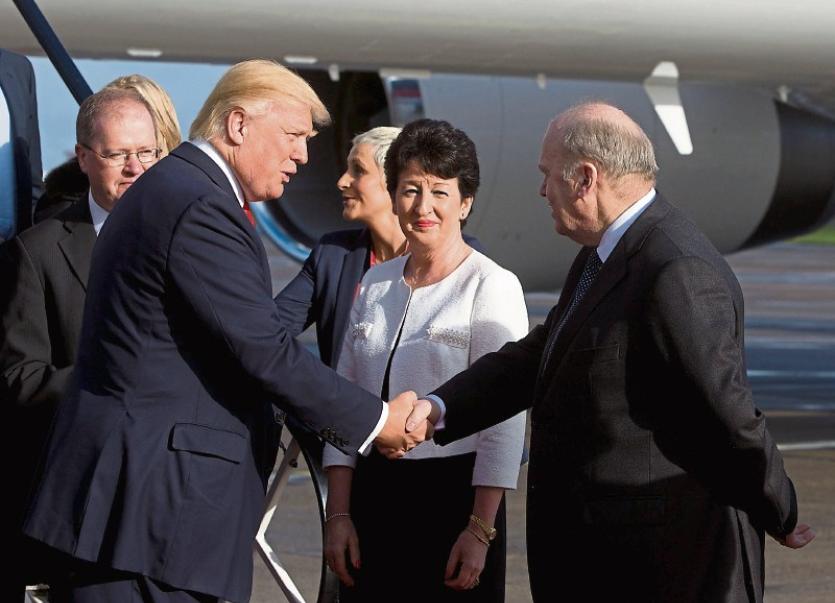 THE TAOISEACH Enda Kenny should travel to the US on St Patrick’s day to meet with President Donald Trump, the Minister for Finance Michael Noonan has said, inspite of growing protests and international condemnation following Trump’s ban on Muslims entering the States.

Speaking to the Limerick Leader this morning, Minister Noonan said: “I think the Taoiseach should visit. State visits aren’t always organised on the basis of friendships, and the Taoiseach will go and have a private conversation with him and give the Irish view on things.

“Of course he should visit. He’ll be highlighting his concerns around a range of issues and he’ll have a full discussion as he always does when he visit foreign leaders,” said Minister Noonan.

President Trump's ban on refugees and immigrants from entering the US from seven predominantly Muslim countries has led to mass protests and international condemnation, with protests due at Shannon Airport and the Dublin Embassy this week.

Over 28,000 signatures from the Irish public have now been added to an online petition, against the Taoiseach travelling in their name to present the traditional bowl of shamrock in the White House on St Patrick's day.

The Minister for Finance has been made aware of the petition and the growing concern amongst the public, but stressed that the visit should go ahead.

A protest is also planned for Shannon Airport this coming Thursday, as it is one of two hubs, alongside Dublin, which has US pre-clearance facilities, the only airports in European that have these facilities.

Sinn Fein deputy Maurice Quinlivan said he believes that Enda Kenny "seriously consider" his meeting with the US President on St Patrick's day.

But other Limerick deputies - particularly those within Fianna Fail - have urged the public to recognise Ireland's dependence on the US for job creation, and particularly the wider economic landscape post-Brexit.

"It's deeply concerning what he has done," said deputy Quinlivan. "I was undocumented in the US in the past myself and can only imagine the trauma of what people are going through.

"There is no logic to what he is doing. Let's call it what it is - it's racism - and the Taoiseach should seriously consider travelling to the US. What happens in the next few weeks may change his mind. If he does go, he should urge Trump to lift that ban, and address the 50,000 undocumented Irish we have there," he told the Limerick Leader.

Speaking from a conference on Brexit, in Leitrim this morning, he said Ireland also has to weigh up its economic position as "we are being squeezed in the middle".

Fianna Fail deputy Niall Collins said "we strongly disagree with the policy being adopted by President Trump's administration. Stopping someone from entering the USA on race and religion is unjust and unacceptable.

"However, each country decides on its own immigration and security policy. Pre-clearance is carried out by US authorities in Dublin and Shannon and allows both airports to be hubs, easing passage for travellers from Ireland when they arrive in the US. Rejecting this facility would serve only to make travel between Ireland and the US more difficult and would be a premature reaction," he said.

"These are very early days for President Trump's administration and it is important that the Government closely monitor its progress. Cutting off diplomatic and political contact would be premature and short sighted," he said.

In relation to St Patrick's Day, he said "it is our view that this annual opportunity to engage with the US presidency is of major strategic importance to the country and should be maintained.

"Tens of thousands of Irish people are employed by overseas companies in Ireland. Maintaining professional relationships with the Governments of other countries is central to the country's industrial policy.

"The upcoming visit to Washington DC should be used as an opportunity to press President Trump on his latest changes to stop people from the seven countries he has listed from entering the USA, and also on the plight of undocumented Irish and to explain in clear terms the mutual advantage to both our countries of the presence of US companies operating in Ireland," he said.

Fianna Fail deputy Willie O'Dea said while he disagrees with Trump's policy, he said "Ireland is very economically dependent on the US, and the Taoiseach will have to look at the bigger picture.

"It's a difficult decision. While we disagree with what Trump is trying to do in his policy platform generally, we have to bear in mind we could be in a difficult position in time depending on how Brexit plays out."

The Social Democrats in Limerick city have also called on the Taoiseach to clearly outline views of the Irish people if his State visit goes ahead in March.

Former general election candidate and national executive vice chair, Sarah Jane Hennelly, said “a ban on entry to a state on the basis of religion is fundamentally wrong - be it on a political or a human level. There is zero evidence to show that these people pose a heightened threat to the state. We as a community, as a country and as a people cannot stand idly by whilst human rights and basic common decency is undermined in this way."

The Shannon Watch group will hold a protest at Shannon Airport this Thursday, February 2, at 6pm. People are urged to bring banners and placards.

Minister for Children Katherine Zappone has said that the operation of US immigration pre-clearance at Irish airports must be “urgently reviewed”, after experts in human rights law warned the application at Irish airports of the US ban on people from seven mainly Muslim countries may be illegal.

The online petition is here: https://my.uplift.ie/petitions/shamrock-not-in-my-name?bucket=&source=twitter-share-button