John Moran: O'Connell Street can be the 'new living spine' for Limerick city

Plans to regenerate the main thoroughfare should 'put liveability first, access second and then deal with traffic management' 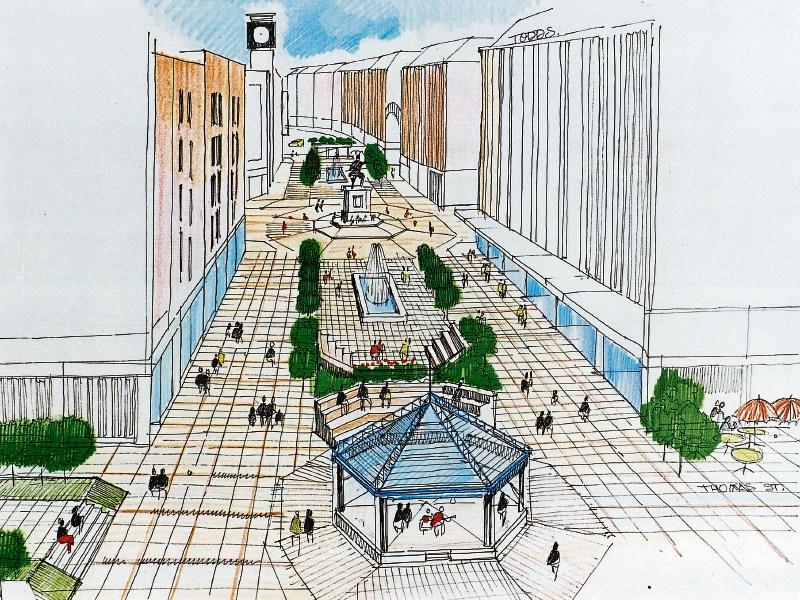 A concept for O’Connell Street commissioned by Tadhg Kearney in 1997, below, a graphic by Ailish Drake

RECENTLY in the Limerick Leader I wrote about the importance of making the right choices for Limerick’s new ambition.

Such an opportunity to reshape our city streets presents itself early in 2017 with the consultation on the future of O’Connell Street.

On-going success for Limerick requires our city to be one of the most attractive places and communities. We talk affordability, sustainability and quality of life.

How we use our public spaces is key to these in a city.

They are where we relax, play, work and shop but most importantly where we mingle and chat with our neighbours and friends.

In a world of growing inequality, our public spaces and buildings must be used to provide amenities and opportunities on a fully equal footing: We should not deny this to the inhabitants of our city.

A group of my friends have been debating what O’Connell Street could become.

We looked at amazement at concept drawings produced some 20 years ago. The pictures one of which is reproduced here speak of that lost opportunity.

We talked about how the vision and visuals of those plans impact our views of the latest five consultation options.

We reckoned now is the time for a similar ambition.

Two years ago, a little urban garden was created in front of Penneys, displacing a taxi rank which dominated the use of that space.

It was a temporary pilot to see if people would engage differently with the space if the options changed and it has made a positive difference.

With courage and a new approach, Mary Hayes of Limerick City and County Council and her team first interrogated the best purpose for that space. Then they accommodated any others displaced and these latter agreed in the common good.

In the same way, the plan for O’Connell Street must begin with a vision about how we use the space. Logistics can then follow.

People may quibble with our group’s musings. Indeed we ourselves had many differences of opinion about the detail. But we quickly found agreement on core principles. We wanted to throw these into the public debate to see what others think.

Primarily, we want O’Connell Street to become a destination not just a street.

Less a linear tool to get cars in one side and out the other but a series of distinct zones from Cruises Street all the way to the Crescent where people will shop, play and relax.

Three reimagined zones! Each overlapping with one another but with a newly inspired feel to each. 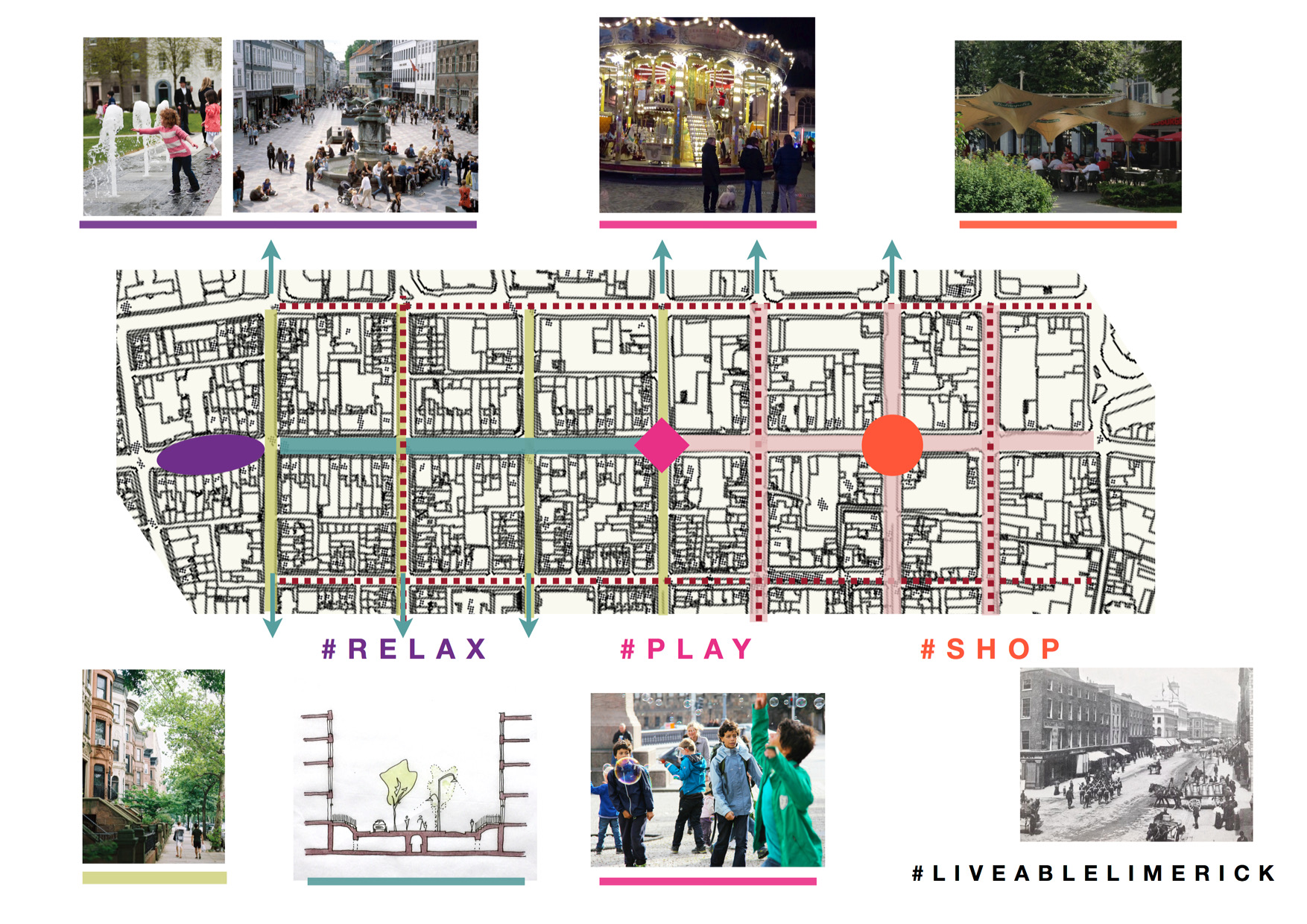 Firstly, a core retail zone clustering around the Bedford Row/Thomas St area. A zone for shopping, banking, grabbing a coffee or snack but also to meet and chat. A sort of in-town shopping centre full of energy and bustle where out-of-town and local shoppers browse specialty and other shops.

Next, approaching Roches Street, an entertainment zone – where people dine, meet in local pubs or even drop into a play at the Belltable or into the new rugby experience. A place of fun and community.

Finally, from Cecil Street to the Crescent, we saw a third historic “residential” zone where people live, work and relax.

For this later, we also envisaged tree-lined perpendicular streets (Cecil Street, Glentworth Street, Hartstonge Street and the like) with refurbished Georgian buildings housing offices at ground level and a new influx of city residents above.

This third part, reconstructed visually to better align with its early 19th Century heritage, someday carrying a UNESCO designation, comes alive with cobblestones, new lighting, central garden spaces and art and terminates at a core “square” at the Crescent.

Benches provide a resting space for weary visitors or to quietly read a book (or Kindle!). The space is animated with amenities for kids or with space for street fairs like we saw during the Limerick 2020 street festival.

Along the route, central nodes at key intersections allow people to stop and chat or watch a street performer or put the kids on a carousel or catch-up by a fountain or street garden.

Looked at this way, our room filled with excitement.

Looked at this way, we could see how people working, living or using our new zones would revisit their expectations about 24/7 access to their front doors.

Looked at this way, living in our new central core and walking or grabbing public transport to work became quickly a desirable alternative. The fear of how to earn the extra 6,000 euros to keep a car on the road to get to work or get the kids to school disappears.

Looked at this way, walking into these new exciting zones from a bus or parking at a transport hub at Colbert Station seemed no longer as much of a compromise - just we are prepared to leave our cars in the shopping centre car parks and walk to the shops ranged along pedestrian aisles inside.

We started to dream and realised that unlike 20 years ago, it is within the grasp of our generations to make these dreams a reality!

I sense too that the design teams also want to do something amazing that will outlive us all.

But strangely, for something so important, few of us seem to have wanted to engage in the consultation.

The election of President Trump reinforces the importance of participation and voting when the opportunity presents itself. Vocal or vested minority views must not trump the majority. For example, did you know that 61% of households in the city centre do not own a car?

Liveability is no passing trend in urban planning for 21st Century cities. This is our #LiveableLimerick moment. Let’s seize it with all our energy!