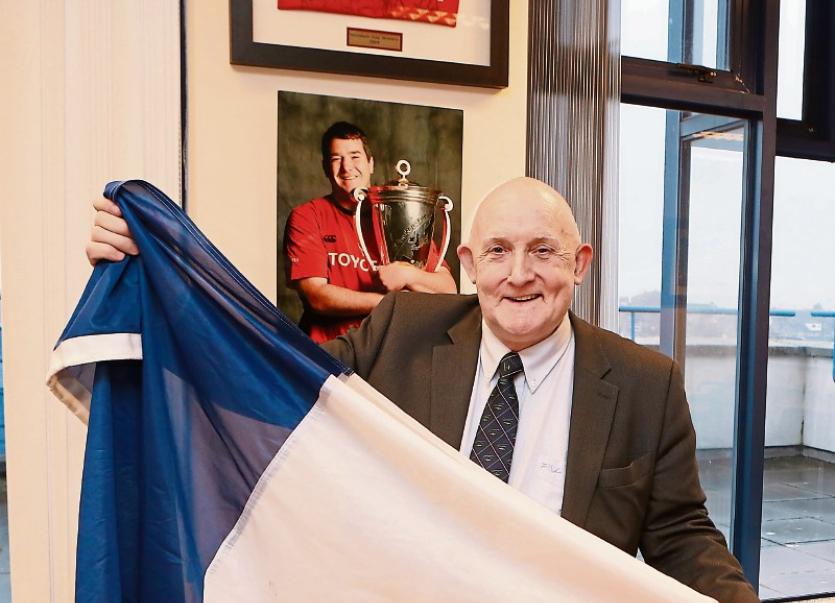 Mayor Kieran O'Hanlon with the French flag that will fly over City Hall Picture: Press 22

A RECORD attendance for a European match will be set at Thomond Park this Saturday evening as Munster face Racing 92 in the Champions Cup.

While the province has already secured a  place in the quarter finals of this year’s competition, a victory over the Top 14 champions will guarantee a ‘home’ quarter final in early April.

In addition to boosting Munster’s prospects in the competition, a home quarter final would be worth well in excess of €10m to the local economy.

An economic impact study, conducted by BDO in 2009, estimated that season’s home quarter final (Heineken Cup) against the Ospreys generated €10.5m for Limerick.

According to the study, an extra 280 part-time jobs were created over the weekend of the quarter final while more than 3,900 bed nights were booked by visiting fans.

Donnacha Hurley, general manager of the Absolute Hotel, says a home quarter final would provide a major boost for the hospitality sector in Limerick.

“Not only would it generate a phenomenal amount of business for my hotel but it would also generate a great buzz around the city so it would be win win,” he said adding that some people are already making plans and have booked hotel rooms in the city in anticpation of a Munster victory on Saturday.

Munster have played in two home quarter finals since 2009 (Ulster in 2011 and Toulouse in 2014) and victory on Saturday will see Thomond Park host its first quarter final since the establishement of the Champions Cup.

As was the case with the St Stephen’s Day clash against Leinster in the Guinness Pro 12, an additional 200 temporary seats have been installed for Saturday evening’s match, which kicks off at 5.30pm.

Munster Rugby has confirmed the fixture, which will see Ronan O’Gara return to Thomond Park for the first time as a coach, is a complete 26,200 sell-out – making it the fifth full house of the season.

Meanwhile, the Mayor of Limerick City and County, Kieran O’Hanlon has asked that the French flag be flown outside the council offices this Friday in recognition of the generosity which was shown by Racing 92 supporters last October and again earlier this month.

“I was struck by the outpouring of support and aid Racing 92 and their supporters offered to Munster Rugby fans upon hearing the tragic news of the passing of Anthony Foley.  This support was repeated again only a few weeks ago when some supporters opened their homes and welcomed Munster Rugby travelling fans a place to stay for the refixed match,” he said.

"To mark this generosity, I have asked for the French flag to be flown outside council buildings in Merchant’s Quay on Friday, as a thank you to the club and supporters for all you have done for Munster supporters during this difficult time."

In another gesture of goodwill, Dolan's Pub has offered a free breakfast or lunch to any travelling Racing 92 supporters, while Bobby Byrnes is offering a free pint to Racing supporters the night before or day of the game.

The supporters club is also to form a guard of honour with their Racing counterparts for the team buses arriving at the stadium, and will carry a flag onto the pitch also.

Gardai say a traffic plan will be in place around Thomond Park from Saturday lunchtime and all match-goers are being asked to use public transport or to walk to the stadium where possible.

Saturday's match will be televised by Sky Sports and will be broadcast on radio by Live 95FM and RTÉ Radio One.