'We have a new life here': the Syrian family who fled their homeland 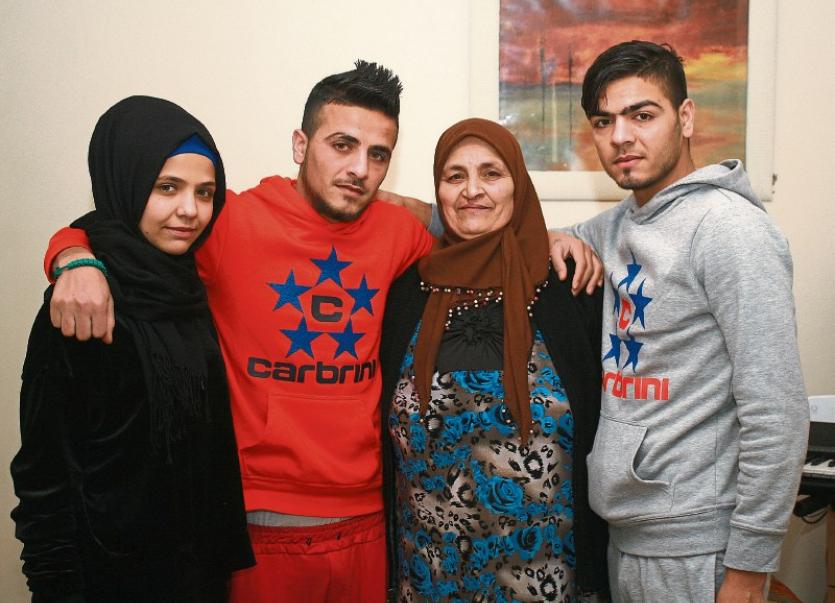 Najah, Moustafa, Khazouna and Khaled opened up to reporter Fintan Walsh, below

A SYRIAN family resettled in Limerick have opened up about their experiences with Isis terrorists and a destructive war that forced them to flee their home in Aleppo.

In an exclusive interview, the Ibrahim family, who moved to Limerick four months ago, described their fear of death during frequent air strikes and their intimidating experiences with Isis recruiters in their village.

During the five years of the Syrian conflict — a dramatic Civil War and Isis siege that turned Aleppo into a terrifying warzone — they lost three close family members to foreign air strikes, Isis attacks, and Assad’s forces respectively.

Speaking to the Leader, widowed mother Khazouna Yousef and her son Moustafa Ibrahim, 23, said that they “feel so safe” in Limerick, their new home.

“Our neighbour next door, when we arrived on our first day, he came over and introduced himself. We then told him that we are Syrian refugees, and the next day, he brought over a cake for the family. He even offered to help if we ever needed a hand with anything.”

The Ibrahim family arrived in Ireland in July 2016, as part of a UN-directed resettlement programme, in response to the Syrian refugee crisis, where more than one million Syrians were forced to stay in camps in the Lebanon and Jordan.

Limerick City and County Council, which chairs the programme in the city and county, has confirmed 25 more refugees will be resettling in Limerick in the coming weeks. It is understood the programme will now be extended.

The refugees have the same rights and entitlements as an Irish person, under the 1951 Geneva Convention. Services provided to the refugees include healthcare, education, social housing, and other services provided by the gardaí, Jesuit Refugee Service, West Limerick Resources, Paul Partnership, LCETB, and Túsla.

‘We have a new life here’: family speak to reporter Fintan Walsh

KHAZOUNA Yousef, a widowed mother, sits next to her son Moustafa in their Limerick city home, quietly recounting their five years of horror from the Syrian conflict, the most prolonged and horrific war this century.

“The last image I have of Aleppo is demolishing houses and airstrikes everyday. It is still fresh in my mind.”

Khazouna’s chronicle is one of heartbreak, resilience, but also great fortune. It is the story of a mother who protected her seven children through Isis’ reign of terror, the claustrophobic Lebanese refugee camps, and a journey across the world to find sanctuary in Ireland.

I join the family for a sweet afternoon tea; six steaming glasses laid on the coffee table in a comfy living room, as the sound of a rumbling washing machine rolls through the house. 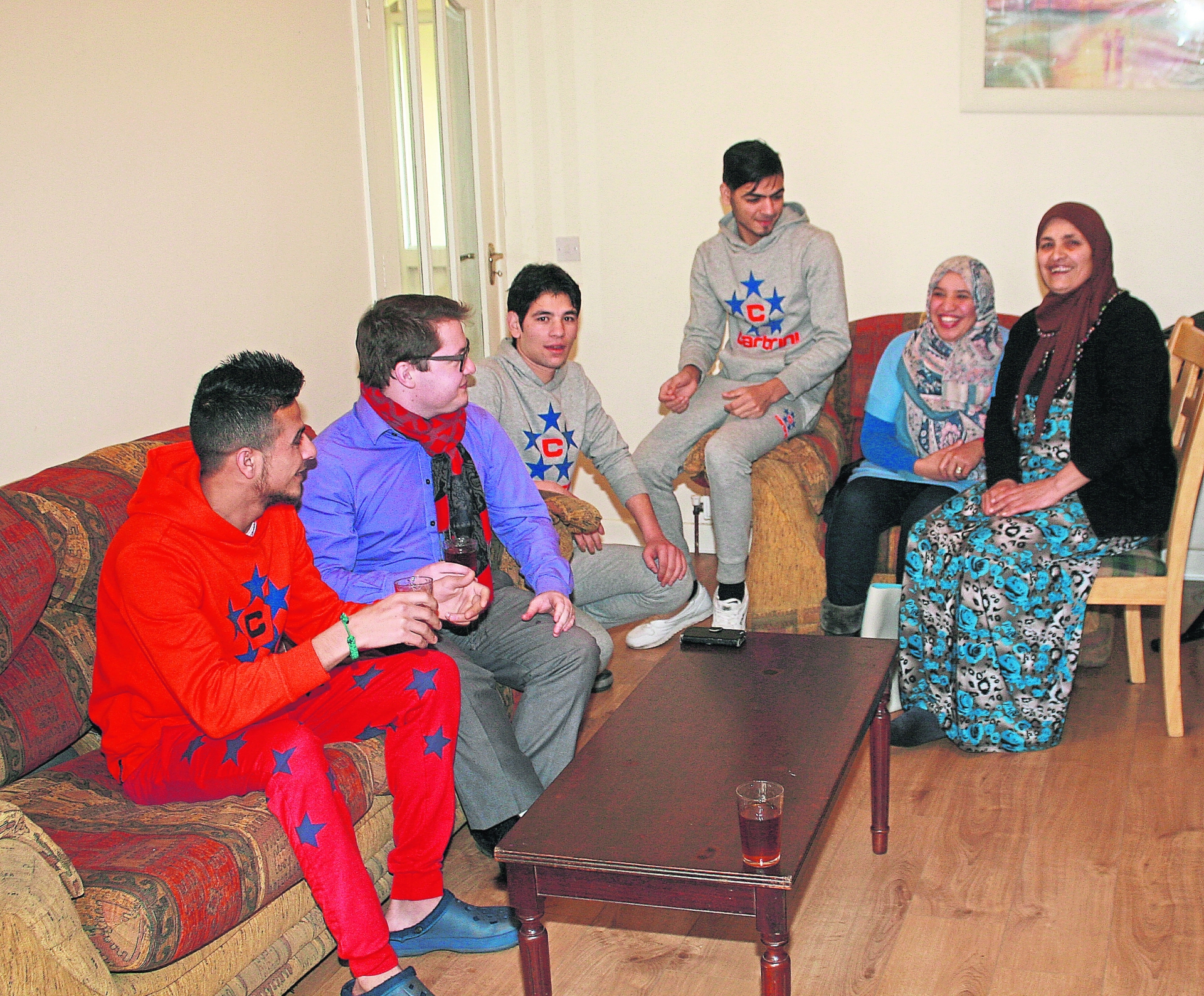 And though Moustafa Ibrahim, 23, and his composed mother are the chosen speakers, we are joined by attentive brothers Khaled, 21, and Muhammad, 12, sister Najah 17, their cousin Saib and friend Sussein. Three sisters are missing from the picture, as they are married in Turkey and the Lebanon.

To help with the language barrier, Mary Immaculate College student Enass Khalifa is our Arabic-English translator. Enass, 35, of Accord Translations, hails from Libya and is specialising in Seamus Heaney’s poetry, as part of her MA degree in English.

Their Limerick city house has been their new home for more than four months, since moving to Ireland through the UN-directed Syrian resettlement programme, and they are some of 72 Syrians benefiting from the initiative in the city and county.

“If you compare to what we were putting up with in Aleppo, our life is so much better here. And we have nothing to worry about. We feel so safe over here, but we lacked that in our home country,” Moustafa starts.

And though they had endured four years of a Civil War on their doorstep, the violence and bloodshed that Isis – or Daesh – brought to their neighbourhood prompted them to flee the country.

Three close family members and “most neighbours” died as a result of airstrikes, by government forces and Isis. In February 2011 — a month before pro-democracy protests started in Syria — Khazouna’s husband, Ibrahim Ibrahim died after a battle with cancer, leaving her with seven young children. This was the second bereavement for them, after losing their eldest brother Juma.

The father, a wealthy farmer, left behind him six hectares of farmland, and with it many cottages of cows, birds, beagles and rabbits. They were “well-off”, as Aleppines go.

But the hardship of their heartbreak was soon to be compounded by rebellion on the streets, after controversial President Bashar al-Assad’s forces started to incarcerate and, very frequently, shoot those who opposed his rule.

This prompted the formation of a new rebel group, the Free Syria Army, who took control of Aleppo’s police stations, after forcing Assad’s army out of the city during a strategic coup.

However, this ephemeral siege was scuppered by Isis’ invasion, whose foreign forces gradually took ownership of Khazouna’s beloved homeland.

Their anarchic order was to enforce their restrictive and conservative Muslim rules, recruit young men to join their jihadist cause, and fight Assad and any enemy of Islam.

Moustafa, just turning 18, was one of the many young men intimidated by the terrorists, who were stationed nearby.

“When they came to Aleppo, they started to communicate with all the young boys, teaching them about the jihad.

“They were always trying to get us on board. We didn’t know who they were, as they weren’t Syrian people. But the people who were from my village were from Pakistan, Saudi Arabia and Iraq.

“Then they started putting up borders in our way. For example, when I was going home from school one day, I was forced to pass through them, and I was forced to have a seat and chat with them. They were looking for me to join their organisation to take up arms.  And in order to avoid their violence, I had to say ‘hello’ to them. I didn’t believe their ideas or their thoughts, but I didn’t want them to hurt me or my family,” he explains.

But when locals resisted their propaganda, they began to force the Aleppines to attend the Mosque, quit smoking, and have all women cover their faces. Any more resistance and you were punished.

Khazouna, 51, said that living in an Isis-run society proved to be “more expensive” with the standards of living dropping dramatically.

“It was difficult for me because I was thinking for the kids’ future during the war. Living costs started to be more expensive. And after Isis entered Aleppo, I told myself I have to get out of here.’”

The city, which once marketed itself as a tourist hotspot in the Middle-East, then became shrouded in dust and debris from Isis’ destruction.

“It was a beautiful city. It was very nice and comfortable for us. In our own village, there were many tourists over there every year. And Aleppo was so nice, but after all this, it is nothing,” she says, jaded.

“So, was there always a fear of death?” I ask, and in unison, they nod and say “akid”, meaning “for sure” in Arabic.

Though the Ibrahims survived the trauma of the conflict, a number of loved ones and locals did not.

Two cousins were killed during the battles in Aleppo; one by Assad’s soldiers, and one by Isis. Khazouna’s brother was tragically killed by a foreign air strike.

“And he left six children behind,” she adds after a brief silence.

When you’re in a warzone, like Aleppo, how do you bury your loved ones with dignity, I ask.

“At the beginning, the families receive the dead bodies of their relatives and they bury them according to their traditions. But after it got so much worse with Assad and Isis, you had to leave the bodies and bury them altogether in the same place.”

They add that it was also an “incredibly difficult time” to leave behind the dozens of animals and pets that they had raised for many years.

After fleeing their homeland, they stayed in the Lebanon for more than a year, first residing in a cramped refugee camp, which was originally built for Palestinian refugees. Once they familiarised themselves with the area, they acquired work, earning enough money to rent their own home.

An official from Limerick City and County Council is the chair of the local programme, which facilitates education, healthcare, social housing, and much-needed services to help the refugees settle in. Each refugee receives a welfare payment of €100 a week.

And they are “very happy” with the “quiet and friendly” neighbourhood, Moustafa chirps.

“We are much happier than we thought we would be. We have been given a new life over here. We thought that it would be extremely difficult to face, moving to a new country, with a culture and everything being completely different, but no, we found it really easy to settle in and to progress in any situation.”

Khazouna has a vision for her children here, she says. “I would like my kids to have a good education, and I want them to have the best opportunities in life, and to build their own life, and to be happy over here.”

Before I close the notepad, one of the siblings concludes: “We are just so proud of our mother.”