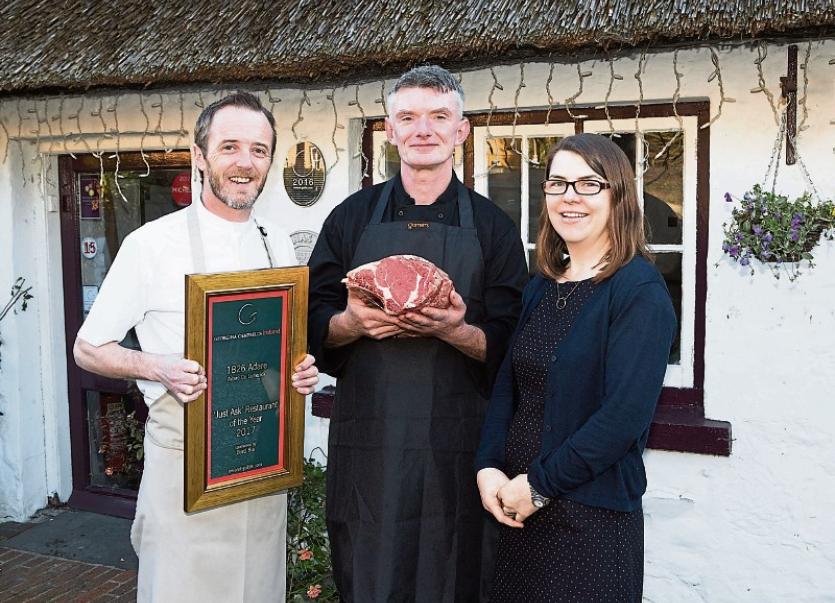 AN ADARE restaurant is gearing up for another stellar year after being awarded the Bord Bia ‘Just Ask’ Restaurant of the Year.

For 1826 in Adare, this is not the first accolade, with the restaurant’s prestige ever-rising since its inception in 2013.

The restaurant will also feature on a new programme by celebrity chef Neven Maguire this month, which will be shown on RTÉ One.

“Naming the suppliers and using local and everything like that has been part of our philosophy since the day we opened the doors, so to get recognition for that is phenomenal, so we’re really really delighted,” he added.

A small team work under the management of husband and wife duo Wade and Elaine Murphy, and sourcing ‘local’ ingredients is a huge priority at the restaurant.

“I have a saying that a restaurant is only as good as its team, and that team includes the suppliers,” said Wade.

“But if it’s Irish produce, which I’m a supporter of, I don’t have a specific thing where everything must come from within a certain mile radius,” added the chef, whose food has won numerous awards.

The new RTÉ programme Neven’s Irish Food Trails will show Maguire meeting “a fascinating and diverse collection of chefs, craftsmen and food producers”. Neven will also demonstrate his own recipes.

At 1826, which will be featured in the series’ first episode on January 18, Wade will be sharing a recipe for rump of lamb with sheep cheese polenta chips, cavalo nero and salsa verde.