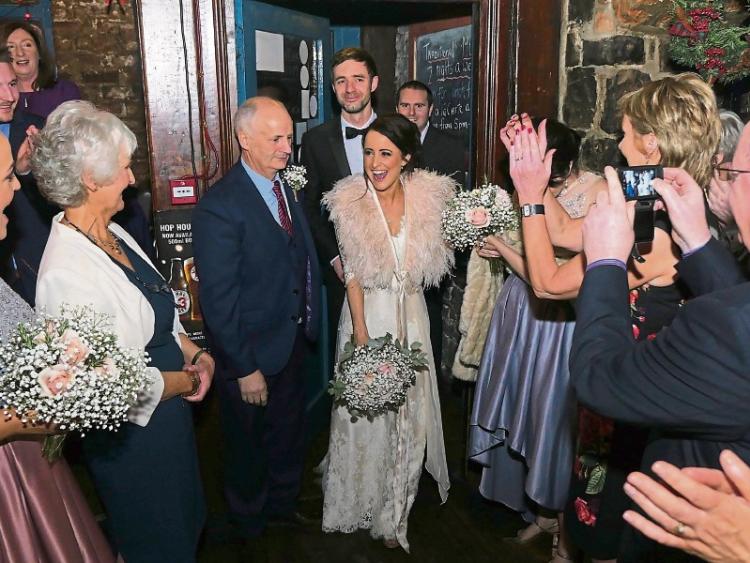 The look of love: Niamh Dunne and Sean Og Graham

WHAT a day in the life of Caherconlish trad-artist Niamh Dunne as she tied the knot with the love of her life and Ed Sheeran revealed she and her band Beoga are to feature on his new album.

Niamh and fellow Beoga band member Sean Og Graham were married in a humanist ceremony at No 1. Pery Square on Friday and held the reception in the perfect location for musicians: Dolan’s.

Niamh – daughter of Aideen O’Rahilly and renowned piper Mickey Dunne – said Sheeran was "every bit as sound as he seems”. “He’s a great person. Beoga are delighted to have had the chance to work with him, and are looking forward to the next part of the adventure,” Niamh told the Leader.

“We had a great few days hanging out and writing some music together.”

The link-up with arguably the most popular singer-songwriter on the planet came through Foy Vance, a great friend of Beoga’s.

“He does a lot of co-writing with Ed. So it was Foy that introduced our music to Ed. And when Ed wanted to write some stuff about his Irish roots we got the call! I can't reveal too much about the tracks yet, I'll leave that to Ed Sheeran himself.”

Speaking on BBC Radio 1  just hours before Niamh and Sean Og were due to walk down the aisle, Sheeran said Beoga were “really, really talented”.

“They came to my house to stay and we made some songs. Two of them have made the record. It’s jammy, it’s folky,” the superstar musician outlined..

Niamh’s mum, Aideen, said it had been a “whirlwind few days”.

“It has been wonderful. The wedding was just amazing, it was such craic, such fun. They are such a lovely bunch of people. Her dad is very proud and Sean Og is the best - he is absolutely super, you couldn’t meet a nicer man,” said Aideen.

One of the guests at the reception in Dolan’s was Oliver O’Connell, a close friend of Mickey’s, who has known Niamh since she was a baby.  He described the 'special' reception in great detail after the couple tied the knot.

“But strangely the atmosphere in that room was something different. It was a cauldron that was brimming on an open fire where you waited for the contents to boil over and spill, and spill over it did as the next arrival was one Finbar Furey. Within minutes the suited guys and glamour girls arrived, Ceili band members, solo artists, well known trad groups, sean nos singers, Irish dancers.

“The stage in Dolan’s was covered in smoke, the room was packed tight, everywhere you looked there was an awesome musician and then the room erupted when out of the smoke walked Finbar Furey with five string banjo in hand. Niamh and Sean Og took the floor to rapturous applause for the first dance, Finbar sang The Last Great Love Song and the room went silent,” said Oliver. He said it was not just a wedding.

“It epitomised everything that is good about us as a people and a nation, this was not X Factor, Big Brother, or I’m a Celebrity, this was raw, pure, honest, real, a spiritual happening that enriched us all, and I am happy that I was part of something special.”