Redemptorists in Limerick due to file €1.2m plan for city site 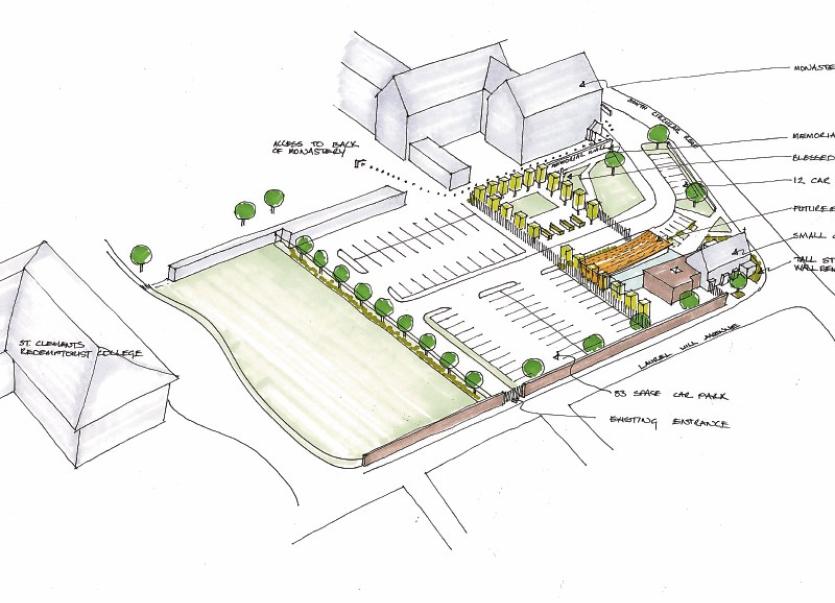 An architect’s impression of the plans for Mount St Alphonsus

THE REDEMPTORIST Order in Limerick will apply for planning permission this week for a €1.2m redevelopment of the church’s surroundings on the South Circular Road.

The plans, designed by Carr Architects, will allow for increased car parking facilities, and landscaped gardens, following the demolition of the old St Clement’s College site.

In particular, the order has highlighted that a greater number of car parking spaces are required for the growing congregation at weekends, and during the Annual Solemn Novena in June, which attracts upwards of 10,000 people during each of the nine days of the religious ‘festival’.

“This is the final instalment, as it were, in our planning for the future the Redemptorists here in Limerick,” said rector Fr Seamus Enright. He said they are delighted that they are “bucking the trend” in Mass attendances, but other challenges remain.

“We do, of course, need new members if we are to survive into the future but that is outside our control,” he told the community, in a newsletter which laid out their plans.

The architects drawings have been displayed at the monastery in recent days.

The proposed works follow the renovation of the interior of the church, and the refurbishment of the monastery. Over the coming three years, an additional €500,000 will be invested in the upkeep of the church.

“We explored a number of options before deciding to demolish the old college building but nothing came of our efforts. The building is not fit for purpose,” he said, adding that it is not safety compliant.

Part of the demolished site – approximately one third - will be used by the new school campus at St Clement’s to give it “more breathing space”, and the remaining two-thirds will be used for gardens and car parking.

The latest €1.2m works will be paid for by the Redemptorist Province.

If granted planning, they hope to demolish the building during the summer months, when schools are closed, to minimise any inconvenience to local residents.

The Redemptorists are one of the few orders in Limerick that not only has survived the upheaval in the Catholic Church, but is actually beginning to thrive in recent years.

Only the Augustinians on O’Connell Street have managed to outlive the Redemptorists in Limerick, surviving nearly four centuries here to date.

The Redemptorists, who have been in Limerick for over 160 years, have begun using marketing and social media forums, including Facebook and Twitter, to reach out to more people, as well as developing an up-to-date website, and live-streaming masses to their congregation.

The Redemptorists have a presence in India, Brazil and the Philippines, and they now wonder “whether the time has come to invite some of those priests [native to those countries] to come here?”