Walk this way:  Large crowds attend 5k events in the city and county over the weekend 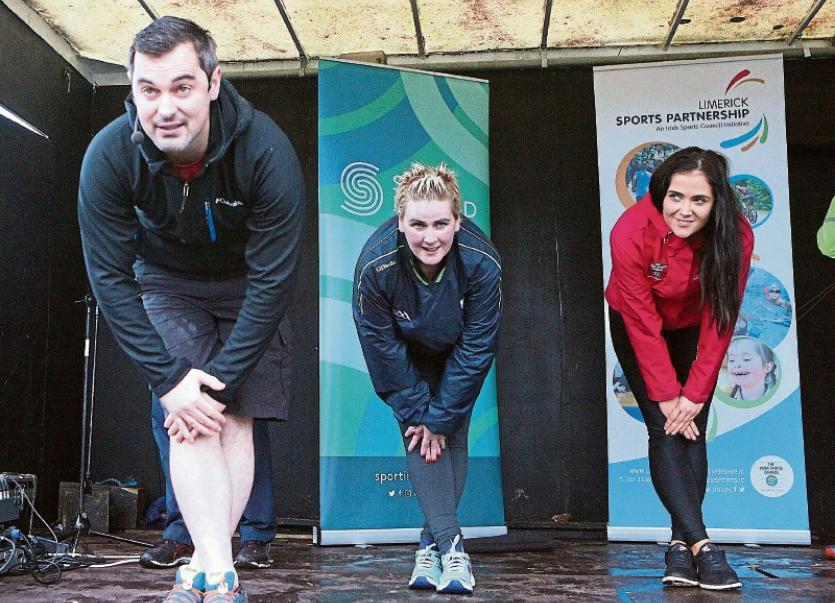 Karl Henry, Marie Grace and Elaine Shea limber up before the walk

MARIE Grace – the Limerick leader on Operation Transformation – has the whole city and county behind her.

Men, women and children came out in their droves at the weekend to take part in 5k walks in the city centre and at Knockane GAA club in Marie’s home parish of Pallasgreen/Templebraden.

Marie led the way in Knockane as she aims to hit her target weight loss of 4 lbs this week.

The tenth series of Operation Transformation aired on Wednesday night when the public were introduced to the five leaders.

Marie touched the hearts of the nation when she opened up about losing a baby after she was born prematurely and the affect this has had on her and husband Fergal. “I suppose I lost a piece of myself when I lost her,” she said. The 32-year-old hairdresser said the weight really began to increase after baby Michaela died in November 2014.

The couple have two young daughters Lily Mai and Daisy and Marie wants to lose some pounds for herself and her children.

Five foot five inches in height, her starting point on Operation Transformation was 14 stone 1 lb. Her dream is to get back to 11 stone.

“I never would have been eight or nine stone. I normally would be around the 11 stone mark and that was fine. I didn’t really have weight as such but now I’m 14 stone 2 lbs. My ideal weight would be 11 stone,” said Marie, who didn’t think she had any chance of making the show.

“Then they rang from RTE to say they would come down to meet us. My sister Michelle said, ‘Oh my God you could be in with a chance Marie’ and I said, ‘I don’t think so, surely there are other people more worthy of it than me’,” recalled Marie. Then she was invited to the final group of 18 get together in Santry.

“I came home and said there are definitely more people that deserve it than I would. I really didn’t think I would get on,” she said. A few weeks later Kathryn Thomas arrived on the door step of N&R Hair Studio to give Marie the good news.

And on Saturday Marie was leading the way on a 5k walk in Knockane on Saturday.

She decided to apply for the show after she coudn’t fit into a dress she bought for Daisy’s christening eight months earlier.

“​I decided at that stage I had to so something about it,” said Marie. She certainly has and Marie has the whole city and county behind her.