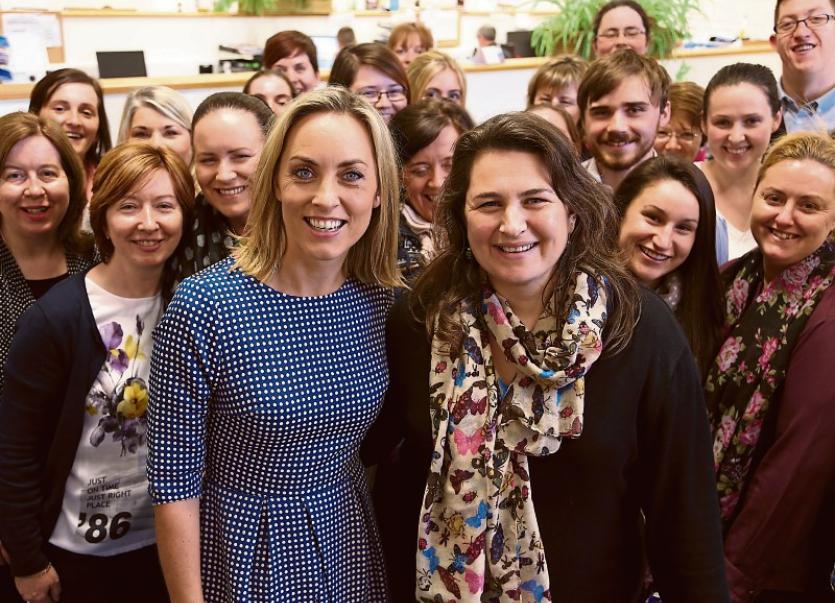 Clare with with Kathryn Thomas and her work colleagues

“I DON’T regret a minute of it,” Clare Scanlan, one of last year’s Operation Transformation leaders said this week as she and her family face into the new year armed with a healthier and more active lifestyle.

“I loved the whole experience. It was a wonderful, wonderful journey to be on with the crew and camera man and my family,” said Ms Clare, originally from West Cork but now living with her husband Tom and their two children in Monagea.

Clare won the nation’s heart when she revealed on the RTE programme how the sudden death of her first-born Darra in 2011  had affected her, emotionally and physically. But she also revealed her determination to lose weight and to develop a healthier lifestyle for herself and her family.

“It was a cry for help from me, I suppose, because I was at a very low ebb when I did apply and ultimately it was to lose weight,” she said.

“The psychological part for me was a big step,” Clare acknowledged.

Her journey began at the beginning of 2016 when she started her programme of diet and exercise and was blown away by the numbers who turned up for the first local Operation Transformation event when 1,200 people did a 5k walk/run in the Demesne in Newcastle West.

“It was very busy. Busy is how I would describe it,” Clare said. “There were quite a few events such as walks and charity events that people asked me to attend. From that point of view, I had plenty incentive to keep me going.”

Diet-wise, all during the summer everything was fine, she continued. She was walking, cycling, doing everything she should do. But a holiday in September upset her plans a little and Christmas was “a bit of a disaster”.

And with a busy job and busy family life to juggle, and with dark mornings and evenings,  she has, she admitted, struggled a bit lately and has put back up a few pounds.

But she is adamant that her previous pattern of yo-yo loss and gain has stopped. “I find I am more educated in what to eat. I make better choices now,” she said.

Now also, if she eats out, she finds she is picking the better option. “Before I wouldn’t have given it a thought.”

As a family too, Clare continued, their lifestyle has improved. They are more active, more careful about what they eat. She finds too that now she also makes more family together time, even if it is playing cards or playing a board game.

One of the huge benefits of being a leader was the huge professional back-up she received. But was it difficult to be so exposed in the public eye?

“It is important to be honest. I am not saying I found it easy always. But I got so much positive feedback. I think people really saw that I was honest, that I was open, I hid nothing. I didn’t disguise anything. I got great support. People are really kind. We forget that when we are so busy.”

And she was very happy with her result in losing over two stone.

“I am looking forward to starting again,” Clare declared this week.  “I plan to follow one of the leaders this year.”

“I am in a totally different head-space and ready to go. My mental space is different. I can attack that now again.”