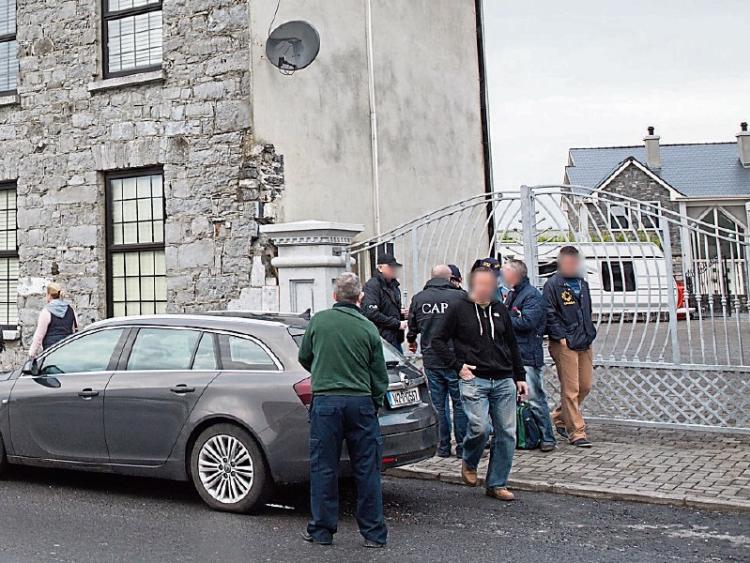 The scene in Rathkeale during the early morning search last month

A FATHER and son who became aggressive towards gardai carrying out an early morning search at the family home in Rathkeale last month were fined €300 each when their cases came before Judge Mary Larkin at Newcastle West court this Tuesday.

When gardai were carrying out the search, Inspector Alan Cullen said, both defendants became aggressive towards gardai and had to be restrained and arrested. “There was no question of assault,” he said.

The search warrant, the men’s solicitor Ted McCarthy explained,  was effected at 5.30am and there was a “considerable amount of upset in the house”.

“Mr O’Donoghue Snr didn’t object to the search but he was of the understanding he and another member of his family could be present during it. That didn’t turn out to be the situation. He and others were confined to the kitchen,” Mr McCarthy said.

When O’Donoghue objected it “turned into some sort of argument”.

“This incident occurred two hours after the search began,” Mr McCarthy continued. “Up until then he was cooperative. He accepts he lost his temper.”

Seeing his father being arrested, his son Fred “out of loyalty to the father, stepped in and tried to dissuade the authorities from arresting his father.” Then he too was arrested.

“They didn’t object to the search per se,” Mr McCarthy stressed. “They were cooperative up to then. They do apologise. “