End of an era: UL pays tribute to Chuck Feeney after donations of more than €170m

Ed Walsh hails philanthropist as 'most remarkable man I ever met' 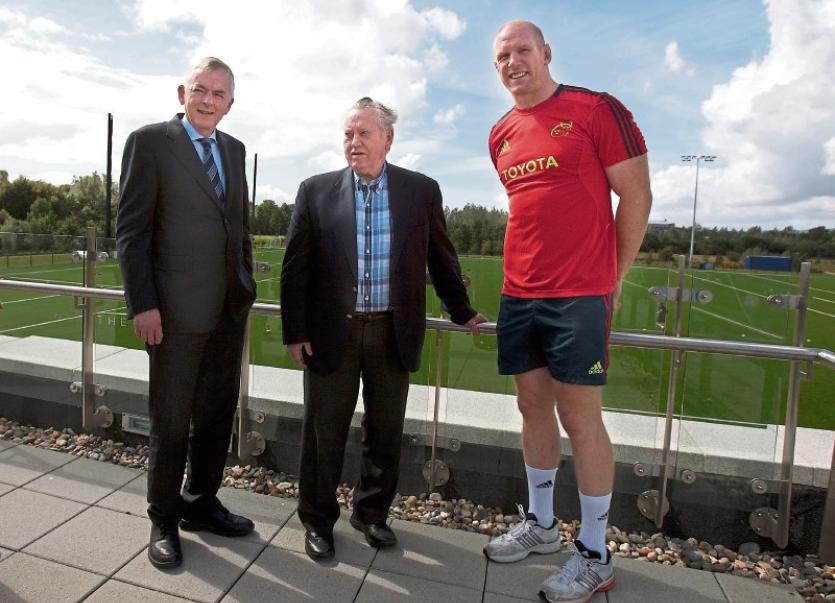 Don Barry and Paul O'Connell with Chuck Feeney in 2012

THE FOUNDING president of the University of Limerick, Dr Edward Walsh, has described Chuck Feeney, the Irish-American philanthropist and former secret billionaire who has now signed his final cheque, as "the most remarkable man I have ever met."

New Jersey born Feeney, 85, who was behind the concept of duty-free shopping in the 1960s, has given more than €1.5 billion to projects across Ireland via Atlantic Philanthropies (AP) over the past three decades.

The last payment from AP has now been signed off, after Feeney pioneered the concept of 'giving while living', fulfilling his "life-long ambition" to give away his fortune of some €7.6 billion.

UL has received more than any other Irish third-level institution - in excess of €170m - with Dr Walsh describing his first introduction to him in the late 1980s as "a wonderful stroke of good fortune".

"It's probably understating it to say that he is the most remarkable man I ever met - living modestly and yet encouraging others in a variety of ways," he told the Limerick Leader.

His first introduction to him came during the Troubles, and it formed the beginning of a long friendship, during a time when Dr Walsh led the fledging university from 1989, formerly the NIHE Limerick, for 28 years.

"At the height of the IRA atrocities, after the Enniskillen bombing, Chuck Feeney came to Ireland. He was horrified at what he had heard, and saw education as the means of creating a better future for Ireland.

"We had formed the Irish-American Partnership and received an anonymous gift. At the time, it seemed enormous - it was for £50,000 - and we were wondering who it was from. I met him, invited him down to Limerick.

"He was a rather nondescript character, but when he came into my office it was clear that he had done an enormous amount of research and was amazingly well-informed about the issues in Ireland at the time, and the difficulties the IRA were creating.

"He then arranged for me to visit Cornell University with him; one of the great Ivy League universities in the United States, and it was agreed that the president of Cornell would visit Limerick to sign a co-operation agreement, between NIHE Limerick and Cornell, just months before the NIHE was even established as a university [in 1989]. It soon become quite clear that we were interacting with a man with enormous and unusual abilities."

A strict confidentiality clause applied for many years as he began donating millions of pounds to UL, with the first major construction on campus being the University Concert Hall, which Dr Walsh said left many in other institutions "dumb-founded" as to how UL had acquired such funds.

"For many years, UL was the only university in Ireland to receive funding. He was hidden away in the Concert Hall building when it opened, and no one knew him or recognised him, so we had lots of fun together behind the scenes, in trying to keep his name from the local and national media.

"Other people simply couldn't believe how we were in a position to develop a world class concert hall and the first on campus in the country, and that student residences were rising out of the ground, and laboratories were being built, especially in such lean and hungry years. Over time, the greater the jealousy grew - particularly in Cork and Galway," he said, with a laugh.

Over the years, he said that Chuck has become a close family friend, along with his wife Helga, and they have often travelled to his home in Newport, county Tipperary.

He recalled him coming in his front door and producing from underneath his raincoat a cheesecake he had bought in New York before he flew over.

"Everyone knows that Chuck Feeney has given enormously and hugely financially, but he also has helped individuals and organisations in ways that are outside the realm of finance. It's great that he has lived to see the fruits of his efforts globally. We are all hugely fortunate to be associated with this wonderful man," he told the Leader.

Even from its inception, on June 1, 1989, when the University of Limerick bill was brought through the Seanad, Feeney championed the UL cause, flying in crates of champagne from the United States that morning for a major celebration in Castletroy.

Among the most recent projects to come to fruition, supported by AP, is the science-led Bernal Institute, with AP contributing more than €26 million towards the design of a new building, capital work and the recruitment of academic chairs.

“Chuck Feeney will long be remembered as one of the greatest philanthropists of our lifetime,” said David Cronin, chief executive of the UL Foundation.

“The total figure gifted by AP to University of Limerick Foundation exceeds €170m and has been transformational to our campus, the city, our region, our country, our students and future generations,” said Mr Cronin.

UL president Don Barry said that Feeney helped UL “to set greater goals than we could imagine for ourselves and to drive us on with the belief that anything is possible.

“Through his philanthropy the university has had the means to thrive and grow at a rapid rate," he said, with the UL campus growing exponentially in physical size during Chuck's involvement with UL.

“His deep commitment to the advancement and success of UL has led to the development of a young, energetic and enterprising university with a proud record of innovation in education, and excellence in research and scholarship,” said president Barry, who is due to step down this May when his ten-year term comes to a close.

He said that his generosity led to the development of “iconic projects such as the Living Bridge, the Glucksman Library and the Graduate Entry Medical School, to name just a few”.

“Through his phenomenal vision the Irish World Academy of Music and Dance, established in 1994, has been developed into a world-renowned academy and a global centre of academic and performance excellence, enhancing UL’s role as a major centre of artistic and cultural creativity,” he concluded.

In 2012, UL joined with the eight other universities on the island of Ireland to honour philanthropist Feeney, with an honorary doctorate of laws – the first time such an honour has been conferred jointly by all the universities.

He also provided funding towards the €2m residence for the university’s president’s residence on campus, which was a source of controversy at the time and dubbed ‘lavish’ and ‘extravagant’.

Milford Care Centre in Castletroy, which provides palliative care, and the Limerick-based support agency for all migrants in the Mid-West, Doras Luimni, have also been recipients from the former so-called “secret billionaire”.

Milford Care Centre received some €5.4m from Atlantic Philanthropies over a three-year period.

Mary Immaculate College received €407,000 from Atlantic Philanthropies in 2001 for a project to address disruptive pupil behaviour in primary schools in disadvantaged areas.

In its 35-year lifetime, AP has invested €7.6 billion in philanthropy, much of it to construct university and hospital buildings and medical research facilities around the world, especially in the US, Ireland, Vietnam, Australia and South Africa.

At a ceremony in New York last month, Chuck and his foundation approved a final grant of $7 million (€6.7 million), to his university, Cornell, in upstate New York, which was the recipient of his first donation in 1982.