Lots done, but more to do for Men's Shed project in Limerick 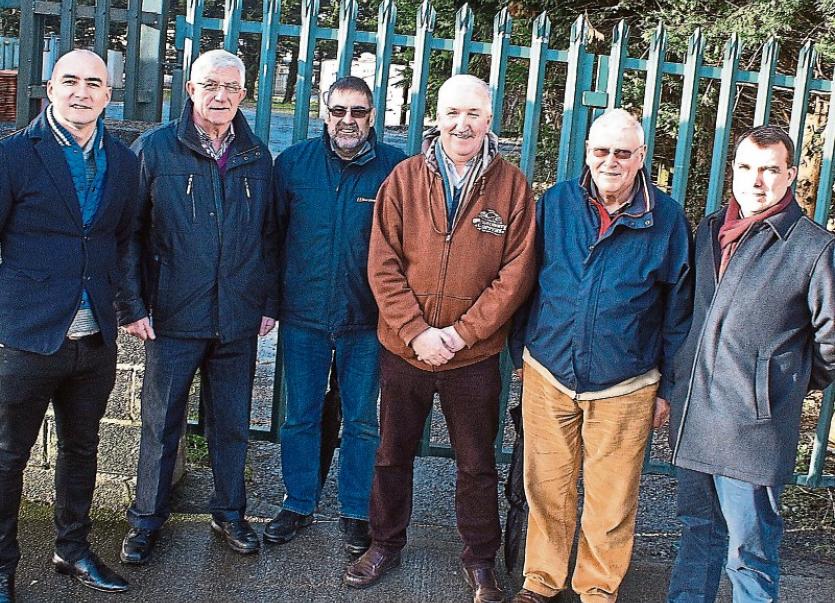 Pictured are the committee Denis McMahon, Pat Lynch, Sean Dalton, Denis Ryan, flanked by Cllrs Daniel Butler and James Collins at the site of the Men's Shed in Dooradoyle

That’s the view of the group behind the delivery of a Men’s Shed facility to serve the sprawling suburbs of Raheen, Dooradoyle and Mungret, as the New Year approaches.

It was 12 months ago this week when the Limerick Leader unveiled plans for such a facility at St Nessan’s Road in Dooradoyle.

But in that time, the group, chaired by Sean Dalton, have secured planning permission to erect a modular building on council land off this road.

And they have also secured the backing of the seven City West councillors – who agreed to donate tens of thousands to the cause – as well as JP McManus, who the group says has made a significant donation to the scheme.

But more is needed to ensure the dream of the six-strong committee, who meet each week at varying locations, becomes a reality.

“Money is the king,” Sean admits, “The nest present for us would probably be if a company or individual decided to sponsor an event or donate something to the shed.”

A relatively new concept, a ‘Men’s Shed’ is a dedicated, friendly and welcoming meeting space where men can come together and undertake a variety of activities or just socialise with their peers and enjoy a coffee or game of cards.

An underlying issue – especially at Christmas – is loneliness among older men, Sean says.

“We have had a huge amount of feedback on this from people. There is a big emphasis on men and isolation among them. Community is the antidote to isolation. When you’re in a community, you’re never isolated,” he explained.

The group has also had many expressions of interest through its Facebook page from the wives of men who, he jokingly suggests, want to get their less better half out the house!

The Dooradoyle Men’s Shed project is different to many of its counterparts nationwide, Sean adds.

“We had to work very hard to secure the site [at St Nessan’s Road]. We are probably a victim of our own success in that most Men’s Shed projects take up an unused building. We didn’t have that luxury. We have had to find a site and build our own shed,” he explains.

While the group is a good distance towards raising a six-figure sum to get the Men’s Shed project on the move, Denis McMahon, treasurer, admits he is disappointed in the lack of response from Ireland’s drug companies.

“We are disappointed with the response of some of these companies who are living off us with all their medicines. We have approached some of these firms through our GPs, but heard nothing back. We are all users of their products, and it would be nice for them to give something back to us.”

The Men’s Shed committee did not know each other at the start of this process, and one of the most pleasing things for them all is the friendships formed among themselves.

“We dearly love each other. We bait the s***e out of each other at times, but it has been wonderful to meet these people. We have been great support to one another,” Denis said, “This is exactly what Men’s Shed is all about: men supporting men.”