Limerick man's no beer year is a charitable learning curve 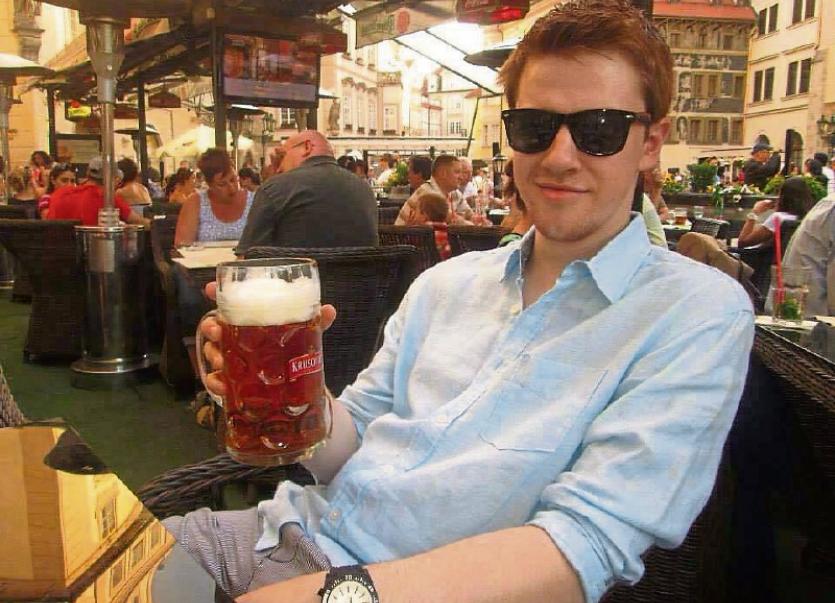 Michael Tynan, from Caherelly but now living in the city, who gave up alcohol for 2016 for Mikey's Year of No Beer

ONE Limerick man is coming near the end of a year in which he set himself a very personal challenge, but it has all been in aid of a worthy cause.

Michael Tynan, from Caherelly, was not adverse to a couple of pints before last New Year’s Day, but the 24-year-old social worker has given it all up for the entire year to help in the fight against child sex trafficking.

Having raised just over €1,000 for the charity Free to Shine, which empowers young girls with an education, he is on the home stretch but is appealing for more donations before his marathon year is over. But why this particular sacrifice?

“It was kind of a cross between two things at the time, I saw the charity Free to Shine on Facebook and I thought it was brilliant what they did, and I wanted to donate or do something for them, but of course I just put it on the long finger, thinking I couldn't do anything of note for them,” he said.

“Around the same time I'd been in Poland at a festival, and a few people had commented how much ‘you Irish’ drink. It kind of hit me in a weird way, like we couldn't experience a big event without getting drunk enough to forget half of it. I was thinking of it for ages and I wondered, kind of as a social test for myself, what would happen if I completely stopped drinking — what had I been overlooking when on the sauce?”

Admitting that it was tough at the start, ‘Mikey’s Year of No Beer’ flourished, but his lifestyle has had to change to accommodate the lack of a drinking habit.

“I tried not to change where or when I went out, but generally I found that all along I'd been going to places with deafeningly loud music where you can't hold a conversation with anyone.

“I was going to these places sober and realising that their sole function was to get drunk in,” he added.

Free to Shine is an Australian non-profit organisation that work primarily in Cambodia. Michael tells me that they identify young girls that are in danger of being trafficked and give them the means to an education.

“I suppose it drew me in because of how incredibly different my life and my childhood is from theirs,” he said.

“We're in a first-world country and are partially blinded to what goes on elsewhere in the world, and for me it's important to know that these things go on and that something can be done,” he added.

His social life has changed since he stopped drinking, despite his efforts to carry on as before.

“We've got a huge drinking culture in Ireland. I started as a teenager, as most of us do, drinking bottles of cider in friends’ houses when their parents weren't home.

“We were too old to be kids, but too young to be adults, and we were bored because we had no identity, no age-appropriate hobbies. It's a common thing for Irish teens to binge-drink, and it sets us up with habits for our 20s and 30s and so on.

“Everything I went to this year, weddings, birthdays, funerals, concerts, festivals, holidays — they're all considered boring or a bit of a failure if we don't have a proper session before, during or after. After a few weeks of forcing myself to go out I realised alcohol doesn't always equate to fun,” he said.

After a comedic run-down of all of his usual hangover symptoms, Michael settles on the benefits of a booze-free lifestyle, but he is going to enjoy a tipple on January 1.

“It makes a difference to the wallet and the mental health, I used to wake up with unreal fear after a night out,” he said.

“I can't wait to drink a pint of Guinness after the New Year rolls in, and a pint of Treaty City Ale too.

“My relationship with alcohol definitely has changed though, if I had a tough day at work I'd go have a pint to deal with it — then Donald Trump got elected there last month and I didn't even consider getting the bottle of Jameson out,” he said.

Of his own fundraising efforts so far, Michael said that “there's enough in this fund to keep three kids out of sex slavery — get past the €1100 mark and we've changed a fourth little girl’s life”.

Michael’s fundraising campaign, ‘Mikey’s Year of No Beer’, is still accepting donations, but the campaign will close shortly after the New Year.