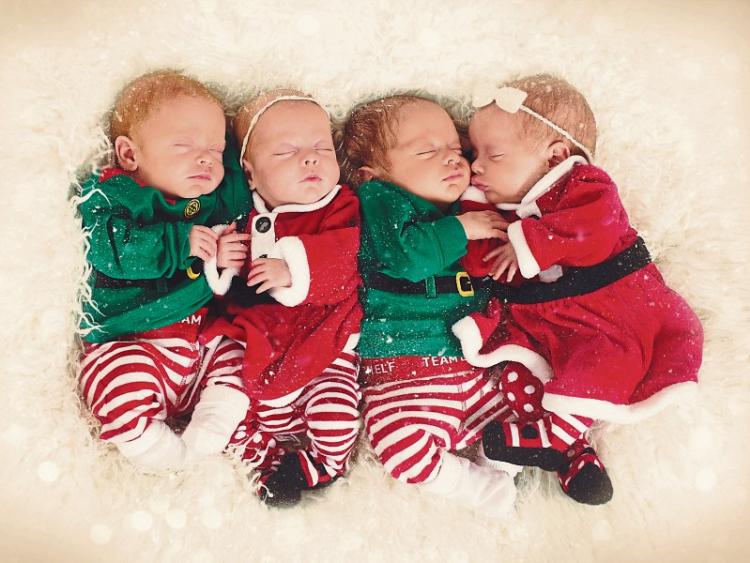 THESE fab four have to be Santa’s cutest little helpers!

And mum and dad, Lisa Fenton and Wayne Downey have got the best present of all – after being born at 31 weeks on October 5 – Kayla, Maxwell, Alexander and Ashley are now home from University Maternity Hospital Limerick’s neonatal unit.

“They are flying it. They are home almost a month now and are doing really, really well. The biggest is 8lbs and they are all around 7 or 8lbs,” said Lisa.

The question on every parent’s lips is, ‘How are they sleeping?’

“Every four hours they are feeding so we are kind of taking it in shifts between myself and Wayne. We have to at the moment, that is the way it works. I will do the morning and all day – Wayne goes to bed at around 6am and will stay in bed until 2 or 3pm. I can go to bed that evening around 9pm and stay in bed until around 6am. Wayne is able to handle the feeds himself on his own at night.

"They are very good babies. We have continued doing everything they were doing in the neonatal unit - we haven’t changed the routine so that has really benefitted them,” said Lisa, from Caherconlish – also where Grace and James Slattery and their quads reside.

Incredibly, Lisa and Wayne managed to move home while their quads were in hospital so they are really looking forward to spending a quiet first Christmas in their new house with their new babies.

Lisa and Wayne wish to thank everyone who has helped them on their journey – from the staff in the Maternity who took such good care of their little ones and now that they are home for the ongoing support.

Lisa can’t say enough about their families, daily home help and public health nurse from the HSE, Barnardos and Community Mothers, who each come in two mornings a week, to help with the countless jobs of caring for quads.

“It is a massive help that makes it a lot easier for us to be able to focus on the babies,” said Lisa.