OPINION: Ups and downs but all in all 2016 was a good year for Limerick 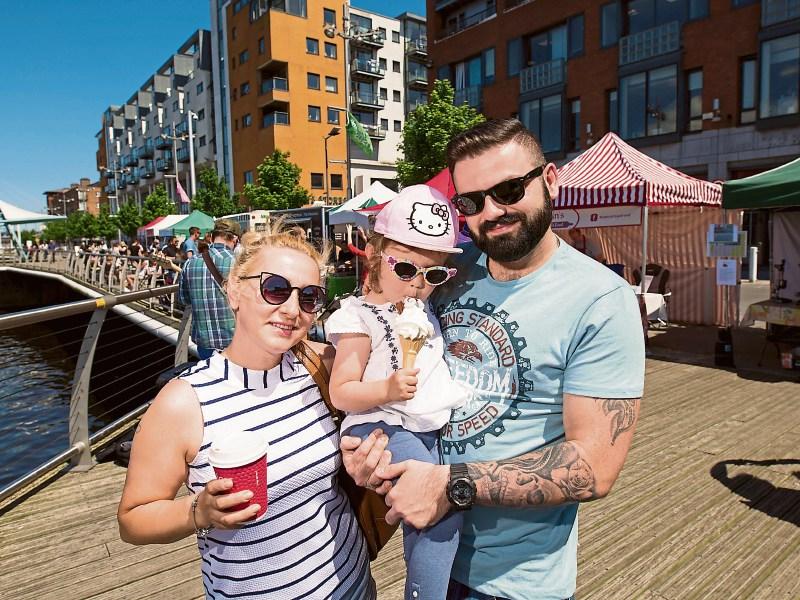 Irena, Maja and Michal Oleynik at the street food market during the summer

CHRISTMAS is always a time for taking stock of the year gone by. It was a year of many major talking points with Brexit, Trump and Syria dominating the headlines.

In terms of our public realm and natural assets it was a great year.

2016 saw renewed focus on how our Georgian city might take shape into the future. Our new look canal walkway won the hearts of many, our city quays project won a National Engineering award.

Team Limerick Clean-up almost scooped a major European award, the Great Southern Trail confirmed a €1.3m upgrade, Bunratty saw a €1m investment. Streets like Little Catherine Street got a lick of paint and have thrived ever since.

The Urban Garden on O’Connell Street put a new focus on how public space usage can be changed for the better.

Food markets took over the city quays on Wednesday afternoons.

The launch of Limerick Twenty Thirty saw the creation of a dedicated vehicle aiming to bring €500m in investment to the city, to create 5,000 new jobs and to overhaul the region’s investment infrastructure over the next five years.

The International Gardens on Henry St is now in construction phase.

An ultimately positive review of Regeneration shows a lot done but a lot still to do.

We saw a renewed focus on the city from private investors.

Most notably was Rudi Butler’s intention to create a major commercial and residential development on the city quays.

Work has begun on the first element of a major restructuring of the port of Foynes, part of a €50m investment in transforming the port into one of the biggest bulk harbours in Europe.

Our newfound confidence saw us feature as the cover story of a major European business magazine.

On the jobs front we saw another positive year with jobs announcements and new investment from companies such as WP Engine, Acacia Communications, Trusource Labs and Fazzi Healthcare.

The total new job creation in Limerick city over the past two years totals over 2,500 with Michael Noonan predicting a further 1000 new jobs in 2017.

The local authority put a renewed focus on making Limerick and its surroundings a leading food production hub with the launch of new Food Strategy.

We launched a new platform to connect us to the 3.5 million people of Limerick descent around the world.

The city mourned the loss of two of our giants.

We bid farewell to the legendary broadcaster Terry Wogan in January and October witnessed unprecedented scenes as the city celebrated the life of Munster Rugby great Anthony Foley.

In what once would have been seen as unprecedented we saw Limerick ex-Pats in Dublin come together to sell the new Limerick message to the world.

Ireland saw a bumper in year in tourism.

The effect was seen here in Limerick with King John’s Castle opening its doors to special events, concerts and beer festivals.

Retail continues to need a boost but the hospitality sector in Limerick saw huge investment with new pubs and restaurants popping up all over the city.

Adare Manor enters the final phase of its redevelopment with the words ‘Ryder’ and ‘Cup’ on the lips of many.

John Moran threw out the idea of Limerick as Ireland’s second city at Limerick Chamber’s Business Strategy Conference. The idea has gathered legs throughout year.

The University of Limerick continued to show almost unstoppable growth. The campus saw the opening of the €86m Bernal Institute, the Munster Rugby Academy and cranes in the sky bode well on campus for 2017.

Limerick Institute of Technology won planning permission for a major development of its new campus at Coonagh Cross.

Culturally we didn’t win the coveted prize for Limerick 2020 but the process of our cultural rebirth has reaped rewards.

We saw the reopening of Belltable venue. Troy Studios development was completed with real anticipation for what might come in 2017.

Riverfest received a new lease of life with other festivals such as TomCat and Elemental planning big things for the new year.

Limerick’s own Ruth Negga graced the cover of Vogue and was nominated for a Golden Globe.

The charity Narrative 4 opened its Global Headquarters on O’Connell St.

Just up the road we saw the announcement of a €10m International Rugby Experience to be led by JP McManus and Paul O’Connell.

Thomond Park was confirmed as being part of Ireland’s 2023 Rugby World Cup bid, a bid that received a significant boost during Ireland’s Autumn series campaign.

Limerick FC seemed unstoppable. Munster Rugby returned to winning ways. We sent Sinead Lynch to the Olympics. We even had our own Shergar, albeit doggy style and with a happier ending. Live 95fm raised over 100,000 for kid’s charities. A plastic bag wearing Limerick native becomes the national speaker of sense.

All in all, it wasn’t such a bad year. To all the readers of the Limerick Leader have a very happy Christmas and here’s to a 2017 that brings us all the happiness and prosperity this city deserves.