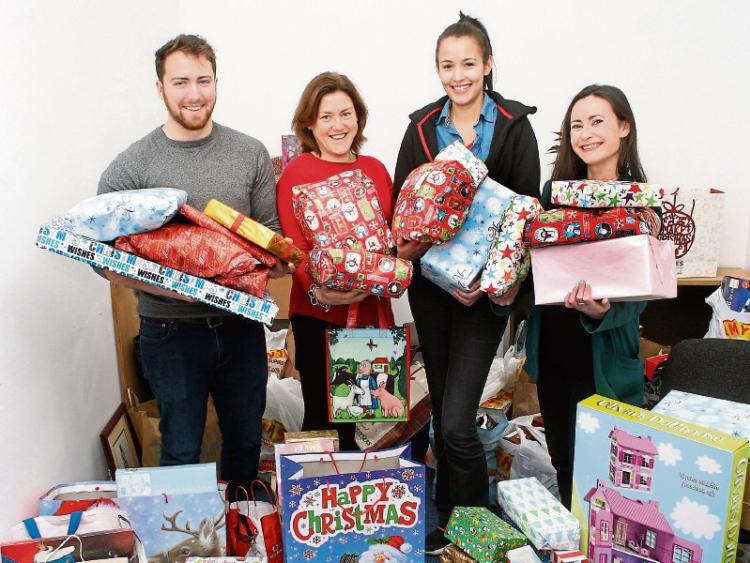 Brian Vandamme, Leonie Kerins, Nicole Stuart and Aideen Roche with some of the donations

FOR ADULTS living in the direct provision system in Limerick and across the country “Christmas is just another day”.

But for children it still needs to be special.

Each year, Doras Luimni, the local support group for all migrants in the Mid-West, issues an appeal at Christmas for gifts for children and their parents.

But they have never witnessed such a response as they have done this year, following an article in The Irish Times by Kitty Holland, detailing the guilt and anguish that parents feel as they cannot afford to buy the Christmas presents they would like for their children – if any at all.

For the first time, this year Doras believes it will have gifts for all 450 children and adults across Limerick’s direct provision centres – in Knockalisheen, on the Clare border, in Mount Trenchard in Foynes, Hanratty's on Glentworth Street, and Westbourne on the Dock Road. In Knockalisheen, there are 47 children – 23 girls and 24 boys – aged from under six months up to teenage years.

The level of donations has been so great that they have kindly been given another office space in their building to store all the goods before they play ‘Secret Santa’.

“We’re really hoping that we’re going to have something for everybody this year. The response has been truly over-whelming. My phone has been ringing non-stop, and we are waiting on gifts from as far afield Australia.

"We’ve asked for donations before, but we have never seen anything on this scale,” said Aideen Roche, communications and campaigns officer with Doras Luimni, a charitable organisation.

The gifts donated and due to be distributed in the coming days include Dunnes Stores and All4One vouchers for adults, as well as phone credit.

For children, a doll’s house, dvds, Lego, a cupcake playset, Bratz dolls, and puzzle games are among the items received, and more are still coming in.

“Phone credit is such a life-line for people, particularly for single males, who have been forced to leave their wives or children back home, and it’s needed all year round – not just at Christmas.

Journalist and broadcaster Deirdre O'Shaughnessy, from Kilfinane, posted the Irish Times' article on her 'Deshocks' Facebook page, on the her blog bearing the same name, and couldn't believe the phenomenally generous response from the public.

She felt moved by the article, which detailed the heartache that many parents in direct provision system endure at this time of year, particularly after the birth of her son recently. She collected nearly 50 gifts in Cork city to cover all the children in direct provision in Limerick, and delivered them to the delighted Doras staff on Limerick's O'Connell Street this week.

- Doras Luimni will continue to accept donations of money, vouchers, and children’s gifts over the Christmas period. To make a donation, call (061) 310 328, or see dorasluimni.org.