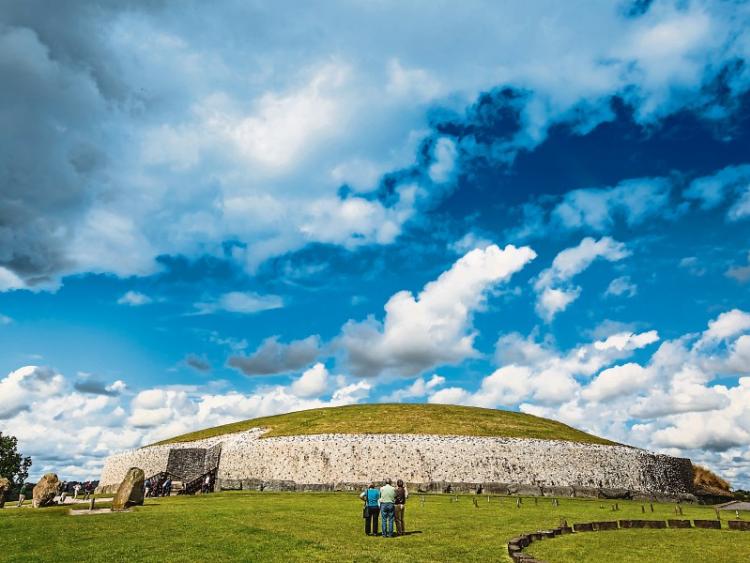 The megalithic passage graves at Newgrange or Brú na Bóinne

ALMOST half a century ago, an Abbeyfeale man became “the first man since ancient times” to have witnessed the light of the sun penetrate the darkness of the burial chamber at Newgrange on the morning of the Winter Solstice.

The man, Professor Michael J O’Kelly, but better known to his friends as Brian, had begun the excavation of the megalithic passage graves at the Newgrange site five years beforehand.

It was a dig that was to establish his name worldwide  and put Newgrange back on the map.

But the rediscovery of the Winter Solstice phenomenon came on the back of a hunch and based on persistent local accounts.

During early excavations, Michael J and his wife, Claire, also an archaeologist, often heard from local visitors of a tradition, that the rising sun, at some unspecified time, would light up the triple spiral stone in the end recess of the Newgrange chamber.

Unfortunately, no-one could be found who had witnessed this but it continued to be mentioned and the O'Kellys assumed, at first, that there was a confusion with Stonehenge and the mid-summer sunrise alignment there.

But in December 1967, Michael J O’Kelly left his home in Cork to go to Newgrange to test his hunch that a south-east alignment would match the mid-winter solstice.

An account written later, tells us: “Some minutes before sunrise on the 21st of December 1967, Professor O’Kelly stood alone in the darkness of the chamber at Newgrange, wondering what, if anything, would happen. To his amazement, minute by minute, the chamber grew steadily lighter and a beam of sunlight began to enter the passage and to travel inwards, "lighting up everything as it came until the whole chamber – side recesses, floor and roof six metres above the floor – were all clearly illuminated”.

“O'Kelly stood rigid for a while, transfixed by the phenomenon and convinced and fearful in his own imagination that the Dagda, the sun god, who according to the ancient tradition had built the tomb, was about to hurl the roof upon him.”

“Fortunately the roof remained in place, the sun retreated and he walked from the tomb, the first person to have witnessed the light of the sun penetrate the darkness of the chamber at Newgrange since ancient times.”

In this dramatic way, Professor O’Kelly confirmed that the builders of  Newgrange had deliberately oriented the passage so that each year around the time of the winter solstice, the rays of the rising sun would shine through a special aperture he called a roofbox to illuminate the chamber.

Michael J O’Kelly spent a further eight years working at Newgrange where ever since the winter Solstice has been a fixed and firm attraction and which now draws tens of thousands of visitors each year.

But the journey began for Michael J O’Kelly in 1915 in Abbeyfeale, where he was born and grew up. Later, he attended Rockwell College before going to UCC to study engineering in 1934. But a year later, he switched and by the time he graduated in 1940 with a first class honours degree in archaeology he had trained as an engineer, surveyor and architect and had taken courses in Irish, geology and geography.

He followed up with an M.A. and took up a job as the curator of the recently founded Cork Public Museum in Fitzgerald Park. In 1946, he became head of archaeology at UCC, taking over from his mentor, Sean O’Kelly.

In 1961, Newgrange was in a dilapidated condition and although visitor numbers were rising, there was no right of public access. It was becoming clear to many that this, one of the greatest monuments in Western Europe, could not be left in this condition.

Michael J was appointed to head up the excavations which took place every summer from 1962 to 1975. In this important work his wife, Claire, whom he met as a student on a dig at the megalithic site at Lough Gur and married in 1945, also played an important role and later produced her own Illustrated Guide to Newgrange.

Professor O’Kelly’s pioneering work is detailed in his book, Newgrange, Archaelogy, Art and Legend. He died in 1982.