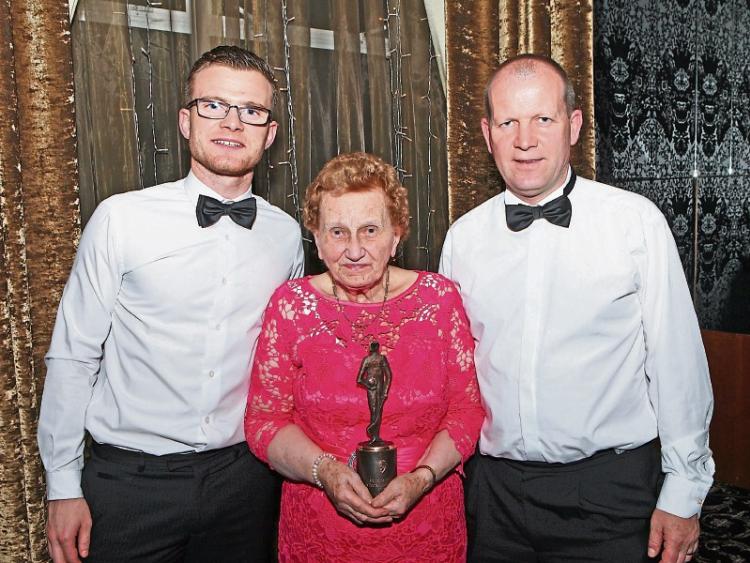 SITTING in her smart, cerise lace dress at a round table in the Rochestown Park Hotel in Cork, 86-year-old Mary Lee was feeling right at home.

The Newcastle West woman eats and breathes Limerick GAA - football in particular. Even the party hat she drew from snapping a Christmas cracker was green in colour.

Mary made the trip to the Rebel County to support her grandson Jamie Lee who was awarded the Junior Footballer of the Year award at the Munster GAA awards recently.

“I actually didn’t invite her because I didn’t think she would want to come but she actually ended up getting her own ticket,” smiled Jamie who put in an inspirational performance against Kerry in this year’s Munster junior football championship.

The stylish corner forward kicked 11 points, five from play and was also a pivotal figure in the quarter final win over Clare.

“I’m very proud of my grandson - very proud that he got the award,” smiled Mary, who is known the length and breadth of West Limerick for her devotion to Gaelic football.

“I even went to Castlebar once to see the Limerick footballers. I was younger then. I’m 86 now. I have two grandsons and the two of them are mad into the football. And I love the football.”

As well as serving as secretary of Newcastle West GAA club for many years - her daughter Margaret Hannan is now the secretary-  Mary has poured out countless cups of tea, sliced numerous sandwiches and travelled all over Munster and beyond supporting Limerick.

Also seated at her table for the gala dinner on Saturday night was her son Billy, the newly appointed manager of the Limerick senior football team.

Her great wish is to see Limerick win a Munster title - be it in hurling for football.

It would naturally be extra sweet to beat Kerry in the final. Mary wouldn’t be too fond of the Kingdom “since the time we played them back in Killarney and they gave Stephen Kelly a hard time.”

The octogenarian was proud as punch to see two other Limerick greats honoured at Saturday night’s awards. Limerick footballer John Quane of Galtee Gaels was inducted into the Munster GAA Hall of Fame. The inspirational midfielder was an ever present member of the Limerick Senior Football teams for 14 years from 1991 to 2005.

“It is a great honour and for the people who have gone before me - to be mentioned in the same breath as them, I am very proud of it,” John said during his interview with MC for the evening Marty Morrissey.

Niamh Mulcahy of Ahane, meanwhile, was chosen at the Camogie Player of the Year.

Niamh has been Limerick’s outstanding player of recent years and she has received All-Star nominations in 2015 and 2016 to go along with one from 2009, Intermediate Soaring Star awards in 2013 and 2014 and a Young Player of the Year award in 2007.

“There is a young panel there and there are a good few of the older players sticking around as well so hopefully next season we will take it a step further or two in every competition and take it from there,” she said.

“Do you know what they say, ‘are you going to the match Mary? And will you have a bag of sweets?’

“Even Pat Lane, the former referee said ‘you’ve never left me down yet with the sweets Mary.’ I bring the hard ones!,’” she smiled.