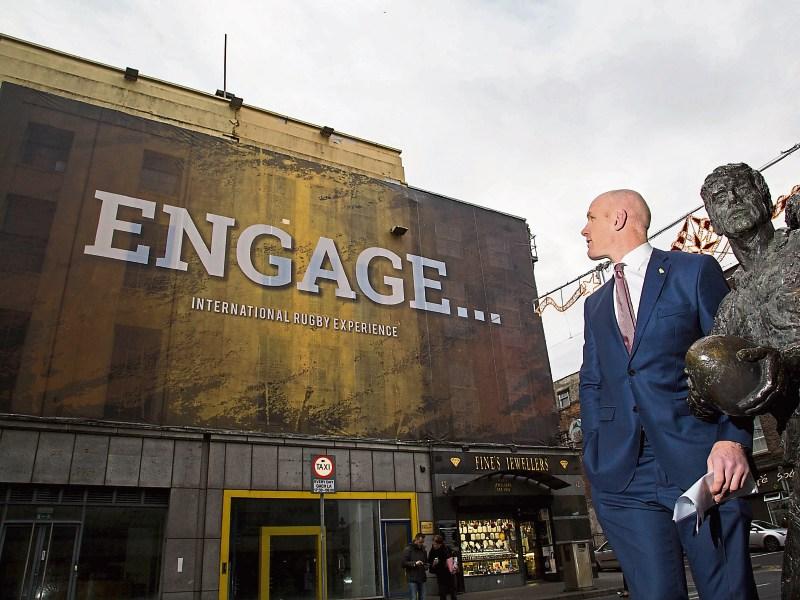 Paul O'Connell looking across at the sign outside the site for the rugby experience Picture: Alan Place

A PLANNED new ‘rugby experience’ in Limerick fronted by Paul O’Connell and backed by a €10m investment by JP McManus has been broadly welcomed in all quarters.

The digital interactive visitor centre dedicated to rugby is set to open in September 2019, with a 30,000 square foot exhibition space located on the city’s main thoroughfare.

It was announced by Mr McManus this Monday morning and will be located at 40-42 O’Connell Street and No 1 Cecil Street with the intention of becoming an “international tourist attraction” that could generate up to 100 jobs during construction and after completion.

Former Munster, Irish and Lions rugby legend Paul is head up the advisory board for the facility and said that Limerick’s “strong and historic rugby tradition” was “internationally recognised”.

“The objective of the visitor centre is to operate as a fitting tribute to the sport of rugby across the world and in so doing, recognise every country in which it is played through the highest quality interactive digital experience. I’m very proud to be part of this ground breaking project and look forward to working with the team on its development,” he said.

Mr McManus said the facility would be “the first of its kind in Ireland” and would “encourage more private investment to the city centre renewal programme and will further enhance exchequer returns as well as creating spin off jobs as a result”.

Mayor of Limerick Cllr Kieran O’Hanlon welcomed the announcement, saying “Limerick is the capital of rugby and this new €10 million euro digital interactive visitor centre will cement Limerick’s position as a mecca for all rugby fans.

“From Munster returning to the glory days on the pitch to this new exciting venture in the heart of Limerick city, it will bolster Limerick’s attractiveness as a sports tourism destination.

“I’m sure the vision and confidence JP McManus has shown with this investment, coupled with the sport, business and tourism expertise on the advisory board of the new visitor centre, will encourage additional private investment in Limerick city centre.”

Laura Ryan, the council’s head of communications and marketing, said the local authority was “extremely excited about this new international rugby experience which will be a fantastic new asset in the heart of our city centre.

“It will be a fantastic addition to our growing list of tourist attractions and will be a ‘must-see’ for all tourists to Limerick.

“We look forward to promoting it as part of our overall Limerick experience to both domestic and international visitors reinforcing Limerick's reputation as a sporting city and Ireland's rugby capital."

There has been a huge reaction on social media, with a host of comments welcoming the announcement.

What a great investment for #Limerick from #JPMcManus - but it won't be open until 2019! https://t.co/mVTOXSsNP2