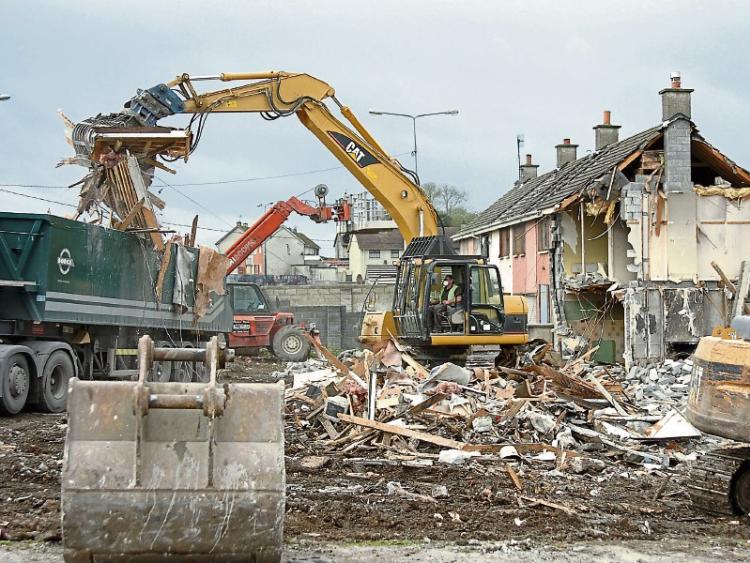 Demolition works in Limerick as part of the Regeneration process

THE MINISTER for Housing and Local Government is to launch a report detailing the progress of Limerick Regeneration over the past three years and its future direction.

As part of a ministerial visit to the city, Simon Coveney will launch the review of the Framework Implementation Plan this Friday at the Innovation Hub, on Roxboro Road.

It will be the first report of its kind in three years, and will provide attendants an opportunity to hear the impact the plan is having in Limerick and “the next steps that will be taken” in the plan.

According to latest Department of Housing figures, it is expected that there will be an annual spend of €30m on regeneration, by the end of this year.

There has been an estimated spend of €260m on the programme since its inception in 2008.

Labour TD Jan O’Sullivan, who launched the Implementation Plan in September 2013 as Minister of State for Housing, said that the Government will need to spend more than €30m in 2017, if ambitious regeneration projects are to go ahead.

Such projects include the completion of the Lord Edward Street apartments, the delivery of the Moyross Community Centre, Cliona Park accommodation, sp-orts projects, and investment into social regeneration.

Around 1,000 homes have been demolished since 2008, with no more than 150 houses constructed. As part of the original plan, it was hoped that more than 3,000 homes would be demolished, and 2,500 be constructed.

Maurice Quinlivan has been pushing for the development of the Coonagh-Knockalisheen dual carriageway, which is believed to be the programme’s largest project.

As part of the implementation plan, a total of €106.5m was projected for Moyross, including €37m spend on housing; €10.8m on refurbishment; €40m on the Coonagh-Knockalisheen distributor road; a €2.5m spend on an expansion for Moyross Community Enterprise Centre; and many more. One city-wide project included a €2m equestrian centre.