A Voice for the voiceless: UL newspaper carried in Limerick Leader 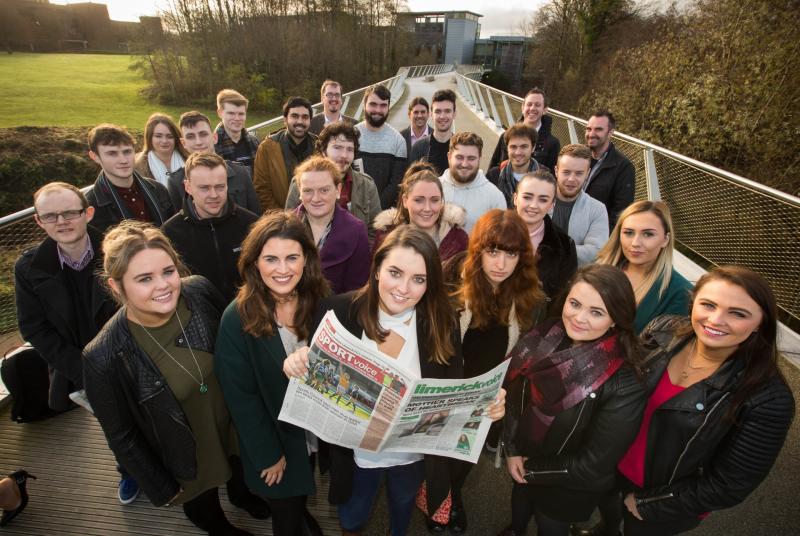 UNIVERSITY of Limerick is showing off the journalistic stars of the future this week, with the launch of the ninth annual Limerick Voice newspaper — a 40-page tabloid distributed in this weekend’s Limerick Leader broadsheet.

This Thursday, students from the BA Journalism and New Media and MA in Journalism programmes launched the publication, filled with local news, sport, features and investigative stories.

In the leader of this edition, Voice reporter Ryan O’Rourke speaks exclusively to grieving mother Abina Ring, whose daughter and two grandchildren were murdered in Newcastle West in November 2010.

It is the first time Abina Ring has spoken about the impact the murders of her daughter Sarah Hines and two children Reece, 3, and baby Amy, had on her and her family, and the devastating consequences of domestic violence.

The newspaper will also be delivered to more than 700 homes across the four regeneration areas in the city.

Pick up your copy of the #LimerickVoice newspaper inside the @Limerick_Leader today across Limerick city and county. @UL @journalismatUL pic.twitter.com/4dFrnVUIwJ

The tabloid edition features more than 100 news and sports stories, including investigations into the number of children on mental health waiting lists, and the worrying extent of absenteeism rates in primary schools.

The Voice, led by editor Michelle Hogan and journalism lecturer Kathryn Hayes, also celebrates the positive features of Limerick, such as its ambitious 2030 economic development plan.

Commending the hard work of her editorial team, Ms Hogan said: “The aim of this project was to give a voice to the voiceless from regeneration areas, to children and young adults on mental health waiting lists, to the homeless families who will spend Christmas in B&Bs in Limerick.

“We aim to highlight the unsung heroes of today, the strong individuals who have taken the opportunity to exclusively share their stories with Limerick Voice on a range of important issues emerging from Limerick which are fundamental to society at large.”

“I am extremely proud of this year’s edition of Limerick Voice, which is the culmination of some incredibly hard work, enthusiasm and commitment by fourth year and MA journalism students.  It is a quality publication which contains over 100 stories, many of which illustrate skills that underpin best journalistic practice.”

School of Journalism subject leader, Dr Fergal Quinn described the annual project as a “core element” of their studies, giving them “invaluable insight into what it takes to run a news website and produce a newspaper”.

Dean of the faculty of arts, humanities and social sciences, Prof Tom Lodge said that the Voice embodies an educational experience that makes the journalism programme at UL “so distinctive”.

Carmel Kirby, of Regeneration, said that the newspaper highlights the “positive work” carried out by Limerick City and County Council.

Please pick up a copy of @Limerick_Leader tomorrow. Huge amount of work went into @LimerickVoice and was a pleasure to work on it #journo https://t.co/Ge9GDJ7hZq

Pick up a copy of @LimerickVoice in @Limerick_Leader tomorrow,hard work went it to what was crated by budding journos #voiceforvoiceless

You can finally pick up your copy of the #LimerickVoice newspaper inside today's Limerick Leader. Packed full of local news, sport and more. pic.twitter.com/UKjUm4AdP1