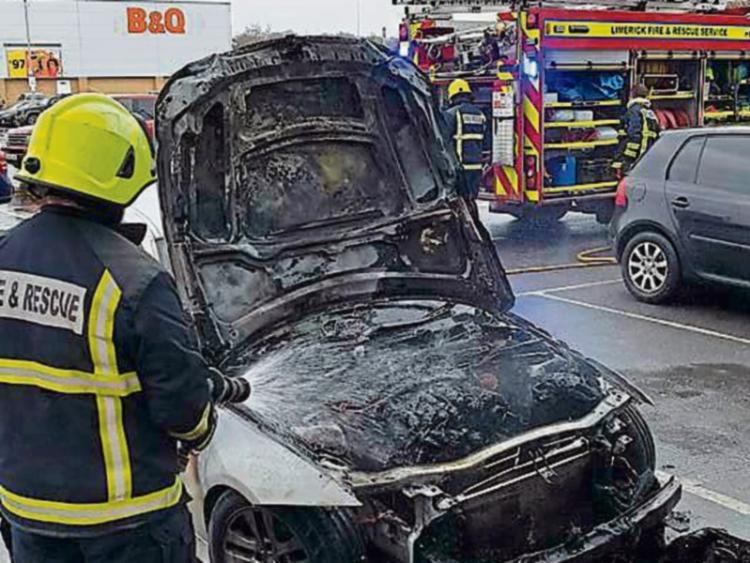 A LIMERICK motorist and her children had a lucky escape at the weekend when their car burst into flames at a city shopping park.

Driver Siobhan Prendiville, a sister of Anti-Austerity Alliance Councillor Cian Prendiville, was in the car with her two children when she noticed that something wasn’t right with the vehicle.

“I think a lot of people would be driving along and might smell oil or might see a little bit of smoke and wouldn’t think to pull over, would sort of hope it would go away. It’s just lucky that she was vigilant,” said Cllr Cian Prendiville.

One unit of the Limerick Fire and Rescue Service attended the scene shortly after 10am, and battled the blaze for more than half an hour.

A video has appeared online showing the saloon car engulfed by flames in the carpark of the shopping plaza.

“When she pulled in a lot of people helped out and staff from one of the shops invited her in as well,” said Cllr Prendiville.

“One of the shops let her go into the back and have a cup of tea while the fire brigade were dealing with the car, so at least the kids weren’t standing there looking at the fire,” he added.

Primary school teacher Ms Prendiville thanked the staff at B&Q for their assistance, and Halfords staff who gifted her with a car seat to get her son home safely.

She said staff were “so thoughtful, caring and kind, which really helped to minimise the impact of this fire on my children”.