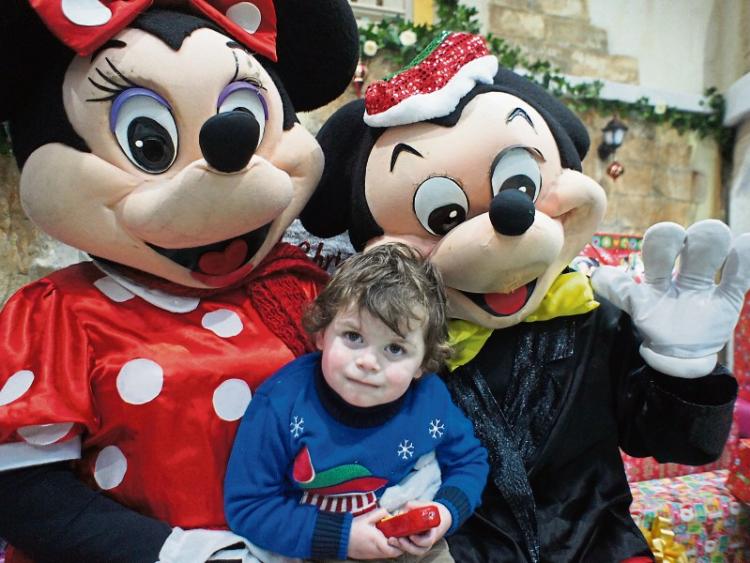 Neil Shanahan pictured with Minnie and Mickey Mouse at Dreamland

TWO year old Neil Shanahan, who survived a fall from the sixth floor of the Strand Hotel in Limerick earlier this year, has visited Dreamland.

The Farranshone boy, who was recently invited to flick the switch on Limerick’s Christmas light display in the city, has defied the odds by not alone surviving the fall but making a steady and remarkable recovery.

Neil visited Dreamland at the weekend, Share a Dream’s new €1.6m all-inclusive play centre located on the Dublin Road in the city.

A spokesperson for the charity said it had a “very special guest” at the facility in Neil.

“Neil had a near death experience that shook his entire family. His resilience and positive spirit, like so many other kids was so inspiring,” said the spokesperson.

“Neil, along with his family, had a truly magical time, as do all the other hundreds of other children who visit Dreamland. He said to us ‘this place is magic’,” added the spokesperson.

The spokesperson said the facility was “going from strength to strength and is having a hugely positive impact on the children”.

Hundreds of people have passed through the doors of Dreamland, which is “especially designed as a fully accessible and inclusive film studio for all children to play in, despite their ability or disability,” founder Shay Kinsella of the Share a Dream Foundation said recently.

It was inspired by the dreams of two children who sadly passed away before Shay was able to grant them their wish of playing on a slide and becoming a princess.

“There’s over 80,000 disabled children in Ireland and in this region there is about 9,000. Those children have never been down a slide, so I thought that something needed to be done for them.

“I decided to build this magical place so that their imagination could run wild. The parents and all of their children will be able to go down a slide together for the first time,” he explained.

A Christmas Wonderland runs in Dreamland until December 23. See www.dreamland.ie for more.