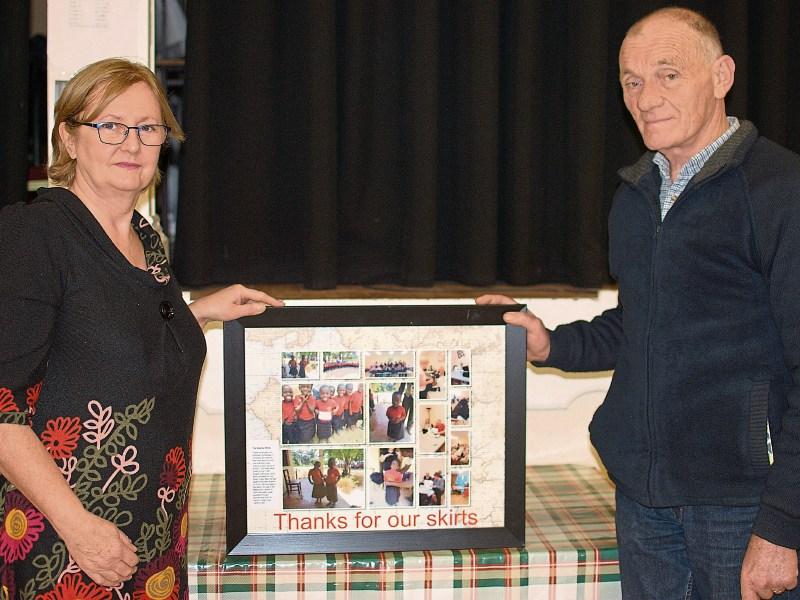 CAHERCONLISH native Noeline Ryan, who worked with the underprivileged during her life, passed away in August 2014.

As she was a member of Crafty Angels Craft Group, who meet every Monday in the Millennium Centre, Noeline had a lot of fabric and sewing equipment in her home.

Her husband, Tom, kindly packed it up and gave it to Elizabeth Stanley of the Crafty Angels.

He told her “make use of that,” and they certainly have.

However, the problem at the start was: what were they going to do with 25 metres of black fabric handed over by Tom?

On one particular summer’s day, Elizabeth said fellow Crafty Angel, Theresa Riordan, Meanus, called her asking if they still had the black fabric.

“Theresa had heard of an amazing lady, Imelda O’Riordan, from Bruff, who goes to Tanzania every year with a charity by the name of Kidscare that run orphanages,” said Elizabeth.

“She raises money every year to make the lives of the children there happier. Theresa had heard from Imelda that the children couldn’t go to preschool unless they had a uniform - a black skirt and white blouse.

“White blouses are grand,” she continued, “and you can get them anywhere. Imelda takes out case loads of them.

”Theresa not long after asked couldn’t we ourselves make up black skirts.” Elizabeth added.

“Ladies promised to arrive with their sewing machines and overlockers, scissors, thread and pins.

“Theresa had made a pattern out of a piece of the Limerick Leader, believe it or not. Everybody rolled up their sleeves - it was a pure team effort. Sixty-five skirts were made in the Millennium Centre in three hours. Within a week they were winging their way to Tanzania in Imelda’s luggage,” said Liz.

“Imelda told the children that the garments were called ‘Noeline skirts’ and they loved that they weren’t just ordinary skirts but carried the name of a very special lady, who used to live half-way across the world.”

Having a uniform and thus being able to go to pre-school is hugely important for children in Tanzania.

“Class sizes in national schools are about 100 children to one teacher, so unless they get the chance to go to pre-school to learn the alphabet and to count, they go down through the floorboards when they go to national school,” explained Liz.

“Noeline would be singing a song if she saw her black fabric going out to Tanzania to help children.

“The greater portion of Noeline’s working life was spent empowering people and encouraging them, and who had an abiding interest in helping underprivileged adults and children,” she added.

Liz hadn’t told Noeline’s husband Tom about their endeavours until this Monday when she invited him to the unveiling of a collage of photos of children in Tanzania and the Crafty Angels working on the skirts in the Millennium Centre.

As Noeline was a founding member of the Millennium Centre committee it is the ideal location to celebrate her legacy.

“The black fabric was Tom’s gift to us. He said ‘make use of that’ and I wanted to tell him the whole story,” said Liz.