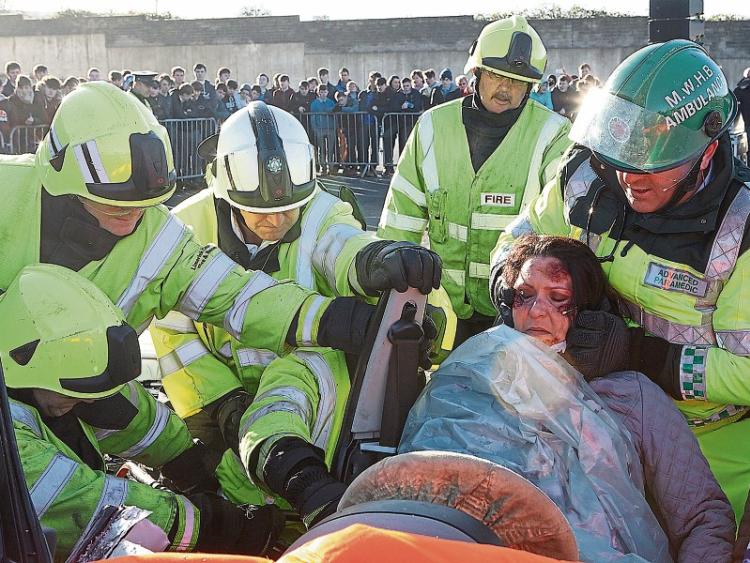 Demonstrations showed pupils the reality of a fatal road collision, and was all part of the Lifesaver Project

WHEN Fergal Cagney speaks, people listen. Paralysed from the neck down following a serious car accident back in 2005, those present could hear a pin drop when he gave a talk to 1,500 teenagers at the Lifesaver Project.

Now in its tenth year, it is a hard hitting account of the reality of road safety in Ireland today and is targeted at young students who are about to embark on their driving careers or currently travel in cars with young friends.

Recently in the South Court Hotel, pupils from the city and county witnessed what the scene of a fatal road traffic collision is like.

Emergency services are deployed in real time and treat the actors as if it was a real situation. The photographs demonstrate just how powerful the reconstruction is.

As well as seeing first-hand what actually happens in a fatal road collision, they had the opportunity to listen to Fergal from Kilteely. 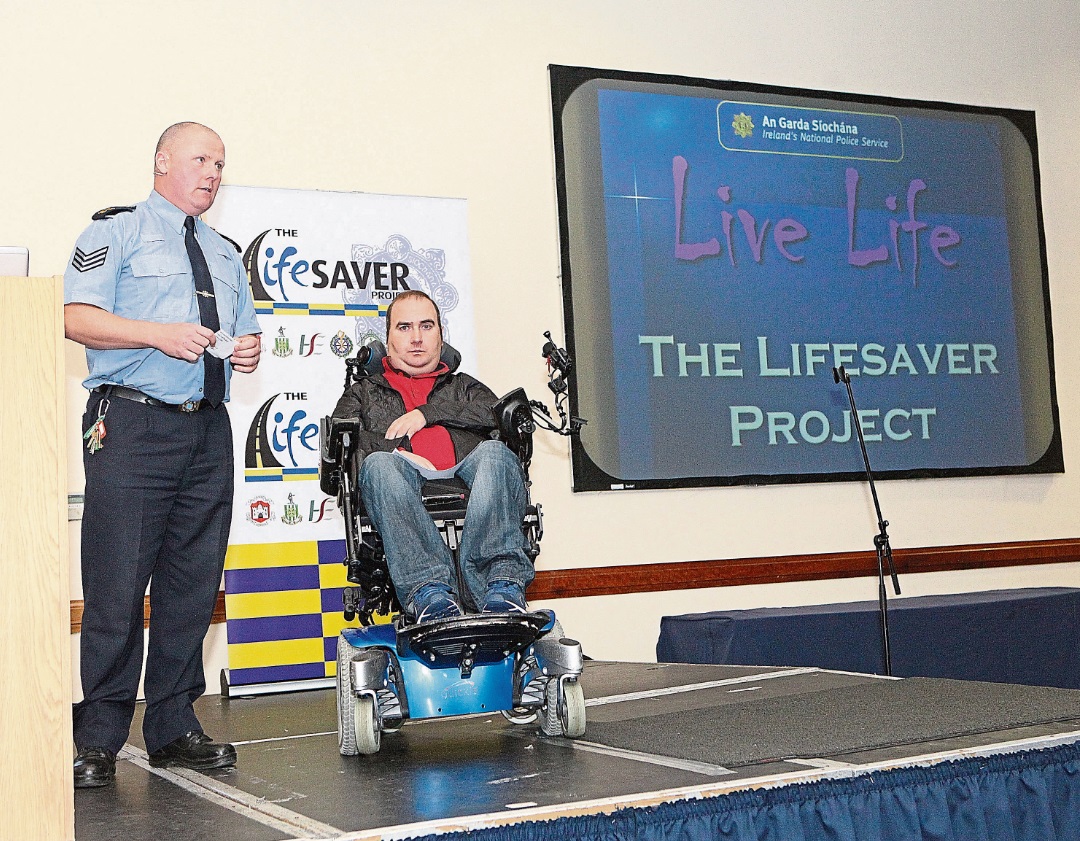 One of the founders of the Lifesaver Project, Sgt Tony Miniter describes Fergal as an “incredibly courageous young man”.

“All of us in the emergency services, we give advice if we can, but to hear Fergal tell his own story in his own personal way… for him to come up on stage and to let people see the effect that the road traffic collision had on him - it’s just incredible,” said Sgt Miniter.

“It demonstrates the life changing effect a few minutes can have on the road. We don't know how many lives that he will potentially save,” he added.

Back in January of 2005, Fergal, who was in his early twenties at the time, was driving to work when he hit black ice on the road between Hospital and Herbertstown.

“I lost control of my car. I crashed into an oncoming jeep. Thankfully I was wearing a seatbelt and no one else was injured.

“I had no broken bones or bruising, but I suffered injuries to my spine and was paralysed from the neck down, which is a C3 injury,” Fergal told the room full of teenagers.

He spent four months in intensive care with tubes in his nose and neck for feeding and breathing.

Not able to speak, Fergal used a reading board to communicate. Between the Mater, Regional and National Rehabilitation Hospital, he spent two years in the care of doctors and nurses.

“Finally in December 2006 I returned home. My family and friends built a beautiful apartment for me on to the family home; it has all the facilities I need,” said a grateful Fergal.

“Along with my family, friends, Cheshire Ireland and the HSE they have provided me with wonderful carers. Thanks to them I’m healthy enough to make this speech.

“In total I need 24-hour care. I have made slow but steady progress and I’m looking forward in a positive way.

”If you take nothing else from this talk, take this,” he told the teens, “it’s cool to have a cool car, it’s nice to have a nice car but it’s neither cool nor nice to be in a wheelchair,” said Fergal, who believes that no car should be able to do over 100mph.

“You have to trust the person driving but not only that, your family has to trust them as well to get where you are going to safely. Likewise, if you are the driver, the passengers and their family have to trust you. Please drive carefully.

“Thank you for your attention,” concluded Fergal. Their attention was absolute.

Sgt Miniter said the Lifesaver Project could not have happened without Fergal, Limerick City and County Council or members of the emergency services - gardai, fire and ambulance services - who give up so much of their time.

“I say to the young people that they can make up their own minds and make their own decisions after hearing Fergal talking and seeing the demonstrations and presentations,” said Sgt Miniter.

“Now they know the consequences of doing something stupid behind the wheel of a car, or even walking or cycling, as many pedestrians and passengers get killed as do drivers every year.

“People have to think that road safety is all of the time and is everywhere,” said Sgt Miniter.