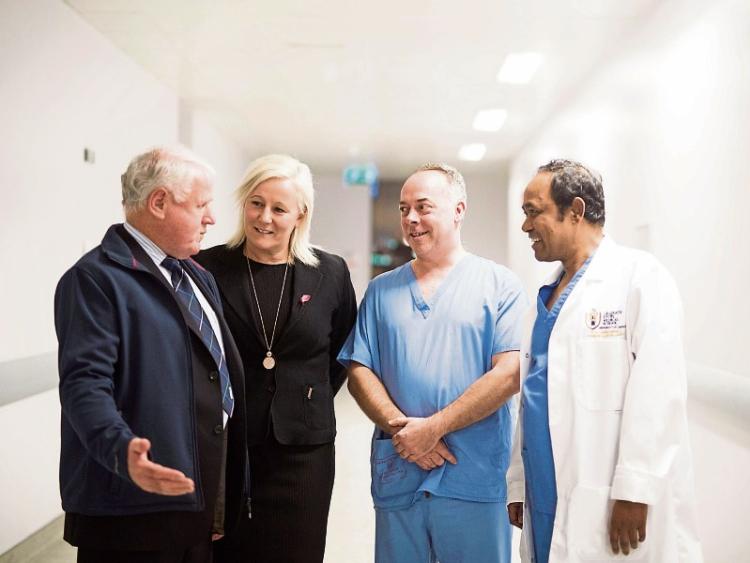 UNIVERSITY Hospital Limerick’s new surgical robot has brought about a “high level of satisfaction” amongst its 29 patients so far, it was said at the launch of the €2.6m innovation.

Two recent patients expressed immense gratitude to the surgical team at the unveiling of the machine, the details of which were first published by the Limerick Leader this September.

Mr Hanrahan had an 11-year-old tumour removed from his kidney this June, and was the first person in the hospital to ever receive the Da Vinci Xi robot surgery, which was then operated by Mr Giri.

In most of Mr Giri’s kidney surgeries, he was able to preserve, or save, the kidney while removing the tumour, potentially preventing the patient from requiring dialysis later in life.

Mr Hanrahan said that after the surgery, he “felt no pain — nothing”.

“The first thing that struck me was the state-of-the-art nature of the theatres and post-operative recovery area I was in afterwards.  I thought is this new? I certainly wasn’t aware of it. I remember seeing the robot and thinking how is that going to operate on me? The incision was so small it was remarkable. I was delighted with my recovery, I was back playing golf in a matter of weeks.

“Mr Giri has a gift, he talks to you not at you, it was so reassuring and his staff all had the same bedside manner, they were tremendous.”

In July, Mr Salo had a tumour removed from his colon, an operation performed by Prof Coffey, whose robotic operations have included colon cancer, cancer of the rectum, ulcerative colitis and Crohn’s disease.

“On initially receiving the diagnosis, you go from looking at all the odds, the prognosis, etcetera, to writing your will!  We quickly realised that Prof Coffey is a giant in his field and we’d really struggle to get better care anywhere else.

“They removed 10cm of my colon, including the tumor and the lymph nodes around the area. During the operation I lost just 70 ml of blood. I was also struck by the size of my scars. I have no modelling aspirations but thanks to the technology the scars I have are really small.”

And according to the programme’s team leader, Prof Coffey, newly-collated data shows that UHL is setting the standard when it comes to robotic laparoscopic surgery, worldwide.

This type of minimally-invasive surgery means that patients’ blood loss and length of stay after surgery is dramatically reduced.

According to figures, patients wait an average of four days after robotic keyhole surgery at UHL. Prof Coffey said that this has only been achieved by three other hospitals worldwide.

Patients undergoing open surgery at UHL lose an average of 135ml of blood. In general keyhole surgery, this is reduced to an average of 105ml. And thanks to the Da Vinci Xi Dual Console Robot, there is only an average of 30ml blood loss. This low rate has only been achieved by one other hospital using in robotic laparoscopic surgery.

The “docking time” for the Da Vinci robot has also been reduced dramatically since it first operated on Mr Hanrahan. In June, it took the machine 45 minutes to set up. Now, he said, it takes just under 10 minutes. Prof Coffey, foundation chair of surgery at Graduate Entry Medical School, said that performing these surgeries is a “remarkable experience” and is “like you’re sitting in the abdomen”.

Of the 29 patients who have been operated on by the new machine, 54% of them have been public patients.