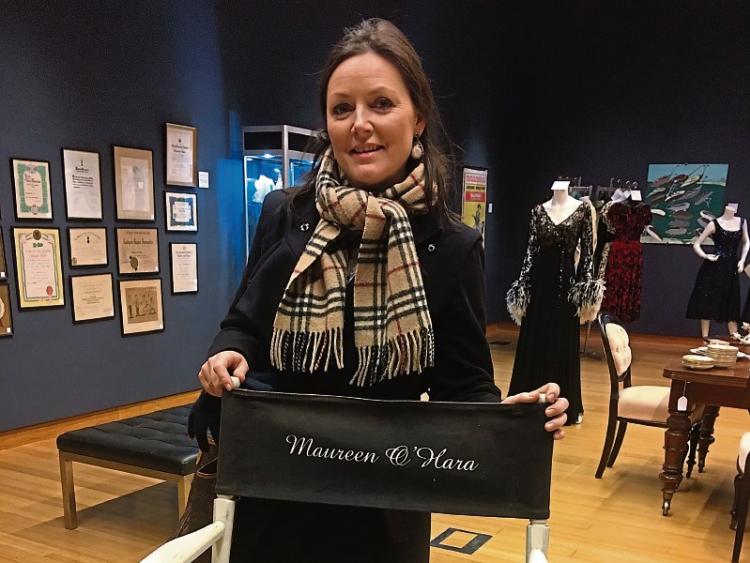 Caroline Daly, Newcastle West, with one of the items up for auction in New York

AN AUCTION of some of Maureen O’Hara’s personal belongings has made over $445,000 in New York.

Among the items which went under the hammer on Tuesday were secret love letters sent to Maureen by John Ford, director of The Quiet Man.

The letters, most of which were in their original envelopes, made up the most expensive lot, selling for more than $75,000. Maureen’s personal annotated script from The Quiet Man was sold for $50,000.

Much of Maureen’s personal collection was donated to Foynes Flying Boat Museum this year by her grandson Conor Beau Fitzsimons. Margaret O’Shaughnessy of the museum was a close friend of Maureen’s for over 30 years, and attended the auction in New York.

“It just goes to show, what Conor Beau has given us is worth a fortune,” said Ms O’Shaughnessy.

The museum currently has a jacket worn by Maureen in The Quiet Man — a similar one sold for over $16,000.

“We were here to give Conor Beau a bit of support. It was nice to be here with him. We met a lot of Maureen O’Hara’s other fans too,” she said.

Ms O’Shaughnessy bought one item to add to the Foynes collection: a dress worn by the actress in the film Spencer’s Mountain, which was the inspiration for the Walton’s.

Newcastle West resident Seamus Hennessy was also at the auction, and said that  the collection “would keep the legacy of Maureen O’Hara very much alive among her genuine fans worldwide”.

“The iconic dress that was worn by Maureen O’Hara in Spencer’s Mountain was grabbed by Margaret O’Shaughnessy, and she got it at a knockdown price of about $600,” he said.

A ceramic mug with the phrase Céad Míle Fáilte and Duke, which was given to O’Hara by her co-star John Wayne after The Quiet Man was filmed, sold for $8,500, more than 12 times its top estimate.

“What astounded us was the whopping price of the mugs that were collected by O’Hara, and swapped between her and John Wayne after each movie,” said Mr O’Shaughnessy.

“They went to big John Wayne collectors and sold for thousands. We believe them to be collected up by the Wayne family, who have a museum and a foundation themselves.”

The Foynes Flying Boat Museum is planning a new wing to accommodate its large O’Hara collection.