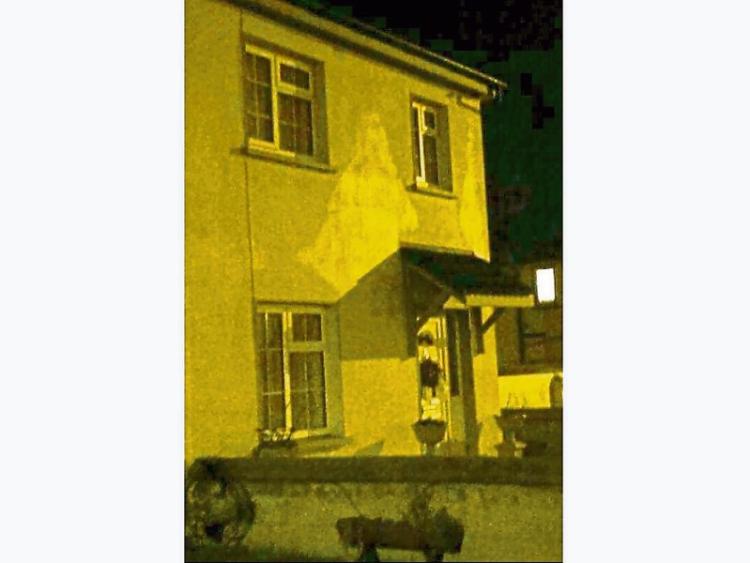 The 'apparition' on the front of the house in Kilmallock, which was shared online

THIRTY-one years after the moving statue phenomenon in Ballinspittle, an unusual sighting of what is believed to be an image of the Virgin Mary has drawn crowds to a house in a County Limerick town.

At around 11pm on Thursday reports began to circulate of a peculiar image which appeared on the front of a house in the Riverview Estate in Kilmallock.

Within an hour, up to 50 people had gathered outside the two-storey home - some travelling from as far away as Mitchelstown - to say prayers and light candles, at what locals believe is an image of Our Lady.

During the commotion, residents called to the house of a local priest at around 11pm asking him to attend the scene.

“At that stage there were up to 40 people gathered. A number of cars and vans had parked up. People were saying the Rosary and holding candles. The priest joined in,” said one local.

”A woman who had been at the doctor was talking about it and a woman who was at the doctor’s was showing her pictures of it on her phone. It’s going all around the town,” the local explained.

The crowds had swelled bigger again by 3.30am at which time one local woman in the estate awoke to a phonecall from a neighbour telling her to look out her front window.

While some are convinced the sighting has a religious foundation, others are putting it down to the freezing temperatures overnight.

“I think it has to be ice,” smiled one local.

This is the second "apparition" in County Limerick in the past decade.

In 2009, thousands flocked to Rathkeale in west Limerick to worship at a tree stump in the shape of Our Lady.