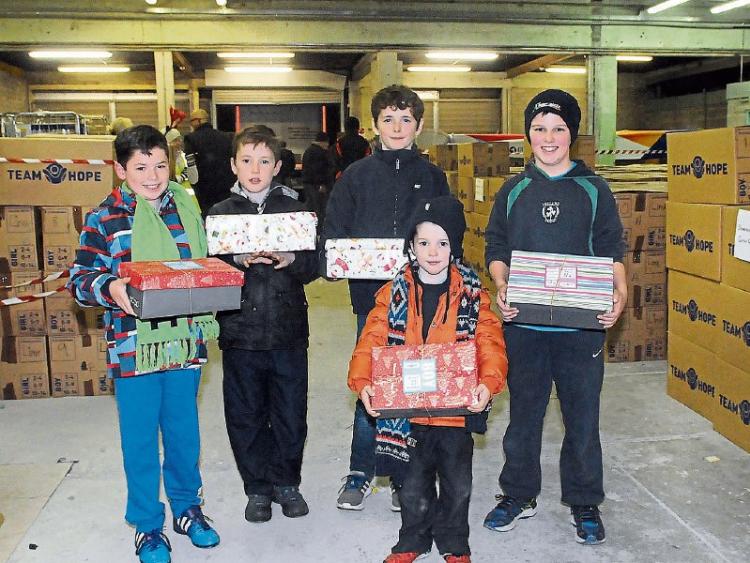 LIMERICK people will bring a smile to the faces of thousands of deserving children in Ukraine and the Democratic Republic of Congo this Christmas.

After weeks of preparation, and hundreds of hours invested by volunteers, over 9,000 shoeboxes were packed and dispatched from Limerick  – and their base at the old Krups factory in the LEDP in Roxboro – at the weekend.

In all the final tally from generous Limerick people came to 9,681, up by more than 250 on last year.

The majority of the shoeboxes – which were filled with special gifts by the public – will be sent to Odessa in Ukraine, while the remainder were dispatched in a second container to the Democratic Republic of Congo.

Norah Collins, from Doon, one of the Team Hope Limerick organisers, told the Limerick Leader: “The response has been brilliant and we are very grateful to everyone who contributed – lots of school children, active retirement groups, businesses, the ICA and many more. These shoeboxes make a huge difference to children whose circumstances are very different.”

Norah has been volunteering for the past 15 years, alongside fellow volunteers and co-ordinators of the Limerick appeal –  Collette Toomey, from Lisnagry, and Rose Riordan, from Castleconnell.

Often, she said, it is the simplest items which can take for granted that can make the most difference for those who have so little, and especially items which can help build towards a child’s education. Shoebox appeal ambassador John McAreavey said that the appeal shows “children the importance of giving to other children less fortunate than themselves. Teaching the importance of selflessness and generosity at a young age is such a valuable skill and a way for children to learn the power of sharing and giving back.”