An 'accident waiting to happen': incident of sulky racing on Limerick road 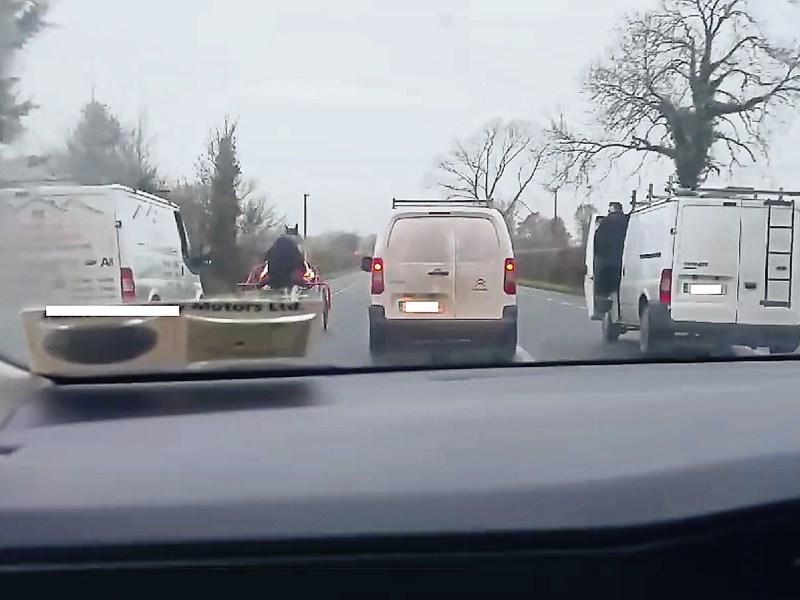 A still from the video, posted on Facebook by Kieran Ryan

THERE was traffic chaos on a road in Limerick as a result of an apparent impromptu sulky race.

Two people in control of horses-and-karts caused vans and cars travelling towards Limerick city to use both sides of the two-lane road.

This was in order to avoid the two traps, which were swaying from right to left at around 8.40am on Sunday morning.

Kieran Ryan shared a video of the incident, which has been viewed by more than 41,000 people as of this Monday lunchtime - a number that is likely to grow even further.

It was taken between Boher and Killonan, near the Caherconlish turnoff of the N24.

The video was recorded by a passenger travelling with Mr Ryan, a former Limerick regeneration official.

He said: "My reaction was utter shock insofar as it was the most ridiculous level of endangerment I have ever seen on the road by anybody. It was outrageous."

Another person, who did not wish to be named, said: "Cars and vans were being driven on the one side of the road, with oncoming cars being pulled into the ditch. It was ridiculous. There was a total disregard for public safety."

Fianna Fail councillor James Collins, who shared the video onto his Facebook page described what happened as "an accident waiting to happen".

"We cannot condone this kind of behaviour. It is on one of the main thoroughfares into Limerick city. We have vans and cars driving on the wrong side of the road blocking off traffic, and drawing incoming traffic into the hard shoulder. We are lucky there was no serious accident on Sunday morning. This behaviour cannot be tolerated," he said.

Mr Ryan insisted that the majority of horse owners in Limerick city are responsible people.

The incident was reported to the Gardai.

Councillor Frankie Daly, who chairs the transport committee, said there was a need for a discussion around a controlled sulky racing track.

“You have horse racing, you have dog racing. It's a similar type of situation. I think we need to make it safe and regulated. If we can get some type of a facility in here and regulate it, I think the knock-on effect to society in general would be positive."