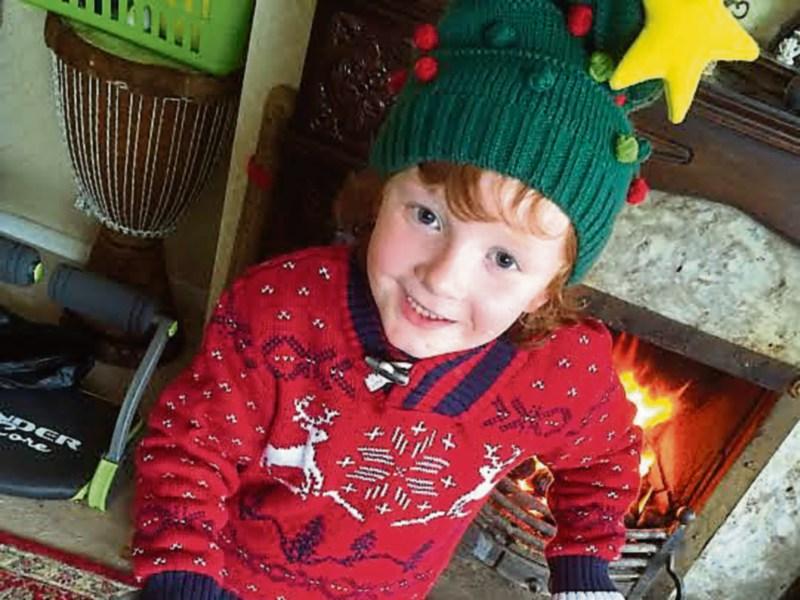 Joseph Monaghan, aged 7, is described as a ‘force of nature’ by his proud parents Joseph and Geraldine

A FESTIVE concert to raise funds for a brave Limerick boy, who has undergone pioneering surgery in the UK, will make him feel like he is Walking in the Air.

The song in the An Post TV ad that always heralds the Christmas season is a fitting one as monies from the night will help Joseph Monaghan, aged 7, to walk in the future.

Joseph, who has cerebral palsy, is described by his mum and dad, Geraldine and Joseph Snr, as a “force of nature”.

“He is a very big character, he is well known here out in Castletroy. Anybody who has met Joseph has been really pulled in by him. He has an incredible way with people," said Mr Monaghan.

Joseph was diagnosed with cerebral palsy and spastic diplegia when he was a baby and has never been able to walk or stand.

The procedure treated muscle spasticity caused by abnormal communication among the brain, spinal cord, nerves and muscles. The family spent a month in the UK with the seven year old.

“You're basically dealing with a child post-operation, they do physio every day, you have three physios working with the child every day. You have to push them to get them up, to get them standing, to get them moving. By the time you are finished in Leeds, four weeks later, you're in a position to work with the child yourself and take them home,” said Mr Monaghan.

Thankfully the pain he did suffer due to high levels of spasticity in his legs is no more due to the surgery.

“Joseph has had a grueling schedule of physiotherapy and muscle strengthening regime these past six months. This regime will continue for the next 18 months but will taper-off as his independent walking improves,” said Mr Monaghan.

All profits from the concert will go into paying for his ongoing medical costs, estimated at €30,000.

Receiving an assistance stability dog will prove invaluable in this process. Joseph sent a little video to Dogs for the Disabled last week and it has already got over 60,000 views on their Facebook page.

“He wasn't able to use quad pods, they're like walking sticks. He's able to walk with them now, he can walk very straight and very well since the operation. He wasn't able to use them before. The stability dog will hopefully bring that on.” As Joseph loves animals a specially trained canine will be the perfect present if it arrives before Christmas.

Mr Monaghan wished to thanks the HSE for paying for the operation through the Treatment Abroad System.

“It’s a pilot scheme. We were the first to be sent over to Leeds for this operation."

While walking unaided is the ultimate goal, Mr Monaghan says if that happens then wonderful but the most important thing is that Joseph is pain free.

“Since the operation he has got 60% more energy. Before if you brought him anywhere for the day, he'd put on a great show for people, but for two or three days after he'd be low at home here. He wouldn't be able to do anything. Nowadays when you bring him anywhere, he has got energy and the following day he can go again. It’s been a God send for us,” said Mr Monaghan, who thanked Owen Gilhooly, Cllr Marian Hurley, Mary Glynn, Rachel Martin for putting on the concert for his son, and all the performers.

Mr Gilhooly, of the Mid-West Vocal Academy and Music School, says they have a terrific line-up of soloists including upcoming Limerick singers Conor Gibbons, tenor; Martha O’Brien, mezzo; David Howes, baritone with soprano Kelli-Ann Masterson and pianists Conor McCarthy and Irina Dernova. Aoide -  A Choir for All will feature in a programme of popular and seasonal favourites.

“Joseph’s mother, Geraldine is a neighbour of mine in Lisnagry and I had long heard of Joseph’s journey and the amazing work she and her husband Joseph have done and continue to do.

“Aoide, our choir, now does regular fundraising events and some of our members including Cllr Marian Hurley and the Monaghan’s family friend, Mary Glynn proposed that we do a concert for Joseph. The ideal time seemed to be in the lead-up to Christmas and so Jingle Bells for Joseph was born. We have a super evening planned with popular and seasonal favourites and we hope as well as doing something special for Joseph, we’ll send our audience away with some early Christmas cheer!

“This concert is the first time Aoide will have performed on their home turf of Castletroy and we are so grateful to Milford church for having us on this special occasion. I’m looking forward to hearing how our 80 voices will sound in there,” said Mr Gilhooly,