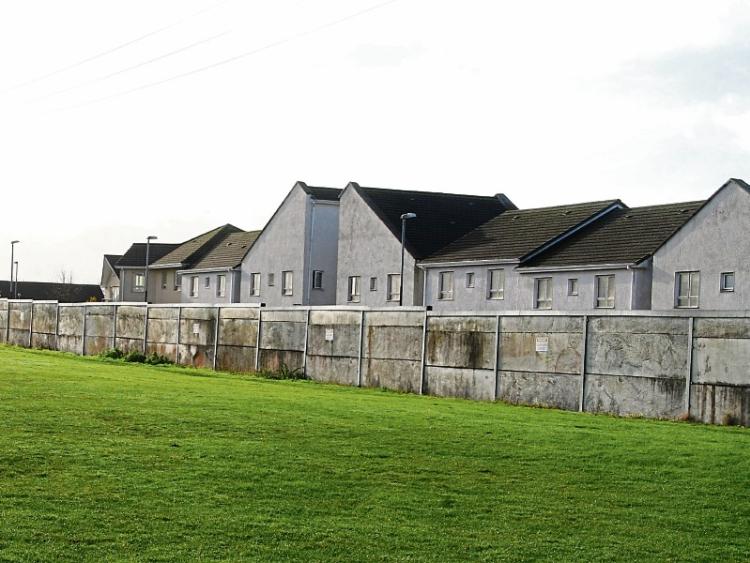 The ten-foot wall which divides Moyross from neighbouring communities – more than 130 people have now signed a petition to knock it down - Picture: Adrian Butler

METROPOLITAN mayor Michael Hourigan says he is willing to facilitate a meeting between residents of Moyross and neighbouring communities over the fate of the area’s wall.

As of this Wednesday, over 130 people had signed the petition to demolish the divide which separates Moyross and Thomond Student Village at the Old Cratloe Road.

The campaign – first revealed by the Limerick Leader – has sparked a huge debate both locally and nationally.

The petition reads: “It is a disgrace this wall was put there in the first place, as no planning permission was allowed. We want Moyross opened up to the rest of the city. Not ghettoised and separated by a big wall.”

And speaking to the Leader this Wednesday, Cllr Hourigan – who represents both the Moyross and the neighbouring communities on the local authority – said he wants to bring the matter to a conclusion.

“You don’t want a rival situation where you disimprove the quality of life for one grouping in favour of another. So it’s important to get a balance on these things. I’d be quite happy as metropolitan mayor to get the two groups together and see if we can find a resolution to it,” he said.

He acknowledged there is strength of feeling on both sides of the divide.

One councillor who is supportive of the replacement of the Moyross wall with a smaller structure is the Anti-Austerity Alliance’s Cian Prendiville.

He said: “It was only put in as a temporary measure. I think the residents have genuine points and the council needs to look at it, especially if the wall is dangerous. The wall could be put there in a nicer way, a not-so-ghettoising way, and a safer way.”

Cllr Prendiville was joined by Cllr John Loftus in his opposition to the wall, with the Independent member revealing he was one of the over 130 people who signed the petition.

“It’s there as if people are going to sweep into Thomond Village and Caherdavin and rape and pillage. It’s not a fair reflection of Moyross. We are told how dangerous the place is – I think people need to get real though,” said Cllr Loftus.

Moyross man Dean Quinn, who started the petition, has been fielding telephone calls from as far afield as the USA and Australia since its launch last week.

He has also appeared on Limerick’s Live 95FM, Classic Hits 4FM and will shortly make an appearance on UTV’s Ireland Live to discuss the controversial issue.

“My phone has been really busy with phone calls. I’m surprised this matter was not brought up years ago. The wall is separating communities,” Mr Quinn told the Leader.

“The thing we need is to tear it down. We are doing this in a positive way, and we are hoping the council can replace it with a nice railing or something.”

The petition has brought opposition, with one Caherdavin community activist predicting an equally big campaign if plans were ever put in place for the wall to fall.

What's your view? - Leave a comment or email news@limerickleader.ie