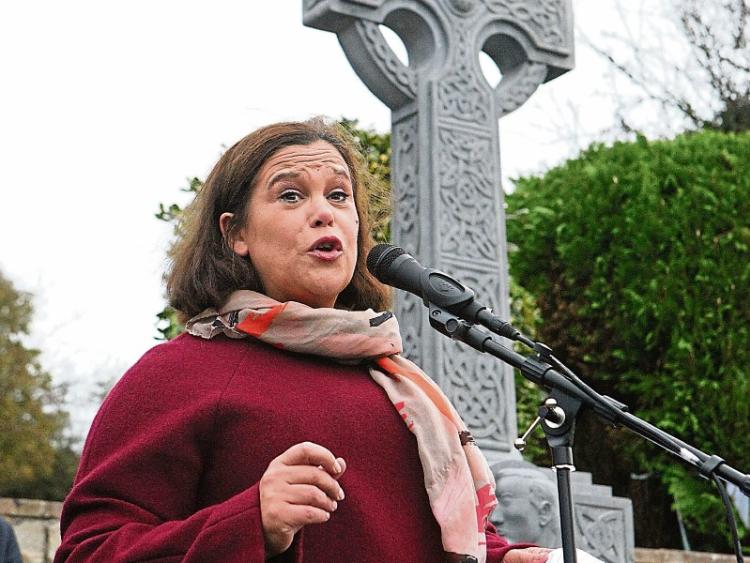 A ROW has erupted over Sinn Fein’s commemoration of General Liam Lynch in Anglesboro, which was attended by the party’s vice-president Mary Lou McDonald.

General Liam Lynch, a former Chief of Staff of the Irish Republican Army, was born in the townland of Barnagurraha near Anglesboro in 1893. In 1978, the General Liam Lynch National Commemoration committee erected a monument in the village in his honour.

A spokesperson for Sinn Fein said the party has sought to commemorate General Liam Lynch near his homeplace in Anglesboro to “celebrate his contribution to the pursuit of Irish independence”.

“This commemoration has been held since 2013, some 120 years after his birth, and is set to be an annual event. There is a monument to General Lynch in Anglesboro for decades and Sinn Féin thought it appropriate to stage a commemoration at the site,” said a spokesperson.

The most recent Sinn Fein event was held on Sunday, November 13 where Deputy Mary Lou McDonald gave the oration. Prior to the gathering an organiser was quoted in another newspaper as saying, “We feel the monument was put there and nothing ever happened. We have organised the commemoration to give people like Liam Lynch recognition”.

Cllr Frank O’Flynn, a former chairman of the General Liam Lynch National Commemoration committee, has taken issue with this.

“We are an extremely active committee. We put up that monument and it was unveiled in 1978 by then Minister Gerry Collins in Anglesboro. The committee paid for it, erected it, unveiled it and maintain with the help of neighbours.

“There is an annual commemoration held at the Republican plot in Kilcrumper cemetery, Fermoy, where Liam Lynch is buried, on the second Sunday in September. Every April there is an annual Mass in Newcastle near where he was killed in the Knockmealdowns.

“We held a commemoration in Anglesboro on the 100th anniversary of his birth and on the 75th anniversary of 1921. We have also brought out a booklet on Liam Lynch. It is wrong to say there is no one thinking of Liam Lynch now,” said Cllr O’Flynn.

Billy O’Callaghan, a great grandnephew of Liam Lynch, said he goes to the ceremonies in Fermoy and Newcastle organised by the General Liam Lynch National Commemoration committee.

“Sinn Fein just came on and started that one in Anglesboro. I was invited to lay a wreath one year but I didn’t do it. I would'nt go to it. Only one or two locals over in Anglesboro would go to it, I’d say they are all Sinn Fein,” said Mr O’Callaghan, who would prefer if Sinn Fein left the ceremonies in honour of his ancestor to the General Liam Lynch National Commemoration committee.

Sinn Fein’s spokesperson said the party “certainly does not seek to supplant or replace any other commemorations”. “Sinn Féin holds hundreds of commemorations to the fallen who gave their lives for the cause of Irish freedom across the island. No one holds a monopoly on the legacy of the struggle for Ireland’s freedom.”